Gaza on Brink of Water Crisis 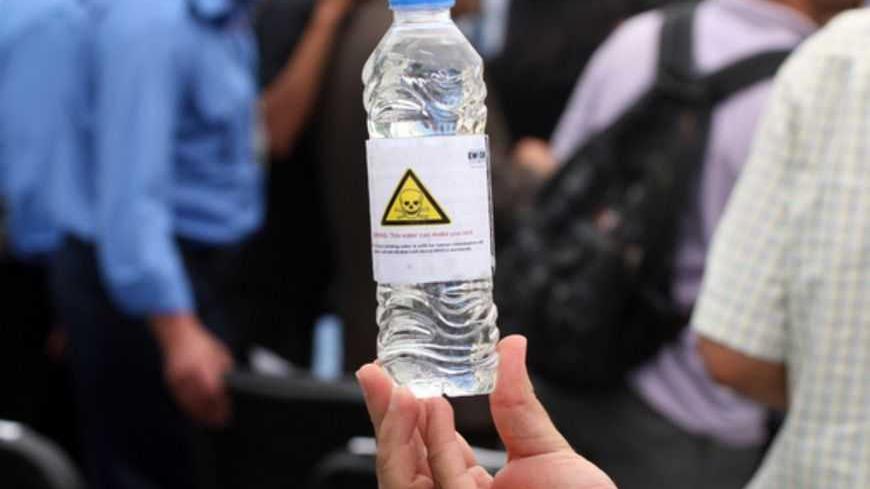 A man holds a bottle filled with water from the Gaza Strip that is unsuitable for drinking during an event in Gaza City, June 14, 2012. - SAID KHATIB/AFP/GettyImages

According to figures issued by public and private institutions, the Gaza Strip is in imminent danger of a water crisis. Fresh water for domestic and agricultural use has become scarce. Moreover, 95% of underground water for domestic consumption is contaminated to varying degrees, which portends the spread of diseases among locals and would make the sector unlivable.

The Gaza Strip, which is characterized by a semi-arid climate, had been suffering from scarce rainfall over the past 10 years, amounting to 300 mm per year. This has adversely affected the underground water reserves.

The aquifer depends on three main sources: rainfall during the winter, groundwater flowing from the northern and eastern borders of Gaza and groundwater from the mountains of Hebron in the West Bank, in addition to leaks from the water lines and treated sewage.

According to a report issued by the United Nations Office for the Coordination of Humanitarian Affairs, the potable water could run out as early as 2016 due to the increasing population and consumption rates as wells as damage to wells, which serve as the main water source. Also, large amounts of sewage is being pumped into the sea and groundwater, which poses a significant threat to the population, particularly children.

Omar Shabat, the technical director of the Coastal Municipalities Water Utility (CMWU), said that 90% to 95% of the total aquifer does not meet international standards of quality.

Shabat attributed the decreasing water to growing population and scarce rainfall, as well as wells dug by Israel along the northern and eastern borders of Gaza to pump water into its territories.

Gazans complain of irregular water supplies and the extreme salinity of fresh water due to the seawater intrusion that destroys aquifers in some areas, making their contents unfit for human consumption. Gazans often have to buy treated water from distributors instead.

According to Itimad Nasrallah, a housewife living in the Rimal neighborhood in Gaza City, the water cannot be consumed or used for domestic purposes other than flushing the toilet or cleaning the floor.

He also stressed lack of awareness among citizens who increase water consumption, the random drilling of wells and the illegal consumption of water, which all adversely affect the limited water aquifer. He added that the Water Authority is to launch an awareness campaign to demonstrate the best way of taking a bath.

In order to overcome the acute water crisis, the CMWU seeks to find solutions to provide sources of fresh water for the residents of Gaza. The possibilities are limited to two options, importing import water from neighboring countries, especially Turkey, or establishing a desalination plant for seawater.

The desalination-plant project had initially been scheduled for launch, but when Hamas took over the Gaza Strip in 2007, USAID suspended it, according to Shabat.

He said project was to be implemented in two phases at a cost of up to $400 million to supply the Gaza Strip with sufficient water, limit groundwater depletion and reach a sustainable level of water consumption.

“We hope that if the desalination project is implemented, we will be able to rehabilitate the aquifer in Gaza within 15 years, in parallel with wastewater treatment that could be used in agricultural irrigation, thus increasing the amounts of water imported from the Israeli Water Company, which currently amounts to 4.7 million cubic meters and can reach up to 20 million cubic meters,” said Shabat.

Nevertheless, in light of the current political stalemate, the divide between Hamas and Fatah, the lack of a unified strategy and Israeli restrictions, the hope of finding of a safe source of water remains slim.

Hazem Balousha is a Palestinian journalist based in Gaza City. He is also the founder of the Palestinian Institute for Communication and Development (PICD). On Twitter: @iHaZeMi