The lack of supervision over water desalination plants and the Israeli siege contribute to the contamination of drinking water available to Gaza’s residents. 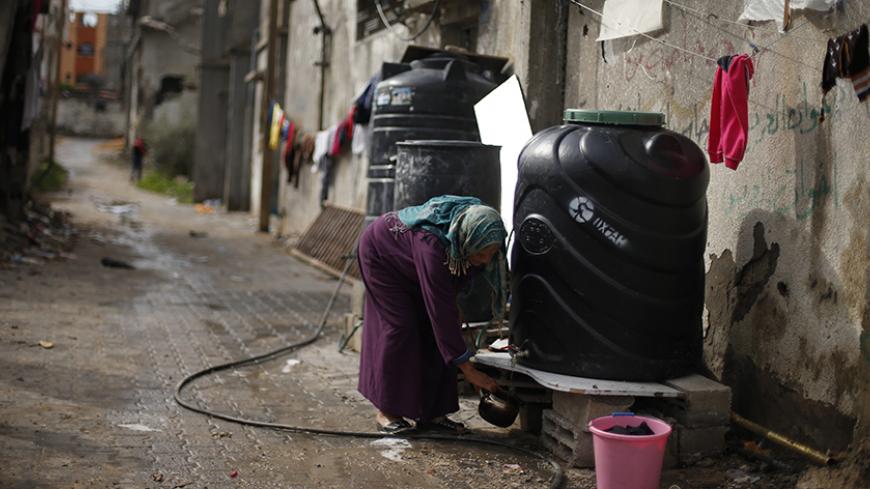 A Palestinian woman fills a kettle with water from a tank outside her house in the east of Gaza City, Jan. 4, 2015. - REUTERS/Suhaib Salem

GAZA CITY, Gaza Strip — The poor supply of water in the Gaza Strip has pushed many unemployed to establish water desalination plants; the water is then distributed to households in private tank trucks. These plants have become the only choice for drinking water for many Gazans, at a time when the political situation and repeated wars have hindered the completion of all international projects aimed at meeting Gaza’s need for drinking water.

Ali al-Mabhouh, owner of a water tank truck in the Nasr neighborhood in western Gaza City, said that his work has saved him from unemployment as he is the only provider of his family of four.

Hosni al-Masri, who also works as a driver delivering desalinated water to households, told Al-Monitor that the water tank truck he drives supports three families. He could not afford to buy his own truck, so he shares one vehicle with his cousins.

“These high salinity rates explains the wide spread of water desalination stations. However, the regulatory authorities are not following up on the operation of these stations, which has caused desalinated water to be contaminated and thus poses a great threat to the citizens’ health,” Mogheir told Al-Monitor.

According to the head of the Coastal Municipalities Water Utility, Monzer Sheblak, “Only 5% of Gaza’s water is fit for human consumption.”

“Since 2007, Israel has waged three wars on Gaza; this is not to mention the unstable political situation and the lack of regulatory measures, all of which paved the way for the establishment of illegal water desalination stations,” Sheblak told Al-Monitor.

According to the head of the Water Department at the Ministry of Health in Gaza, Khaled al-Tibi, there are 120 water desalination plants in the Gaza Strip. However, he told Al-Monitor, “There is an unknown number of unlicensed plants that extract water from illegal wells, which causes a significant and continuous depletion of underground water reserves.”

Tibi recognized the negligence of his ministry and the regulatory authorities, which are not following up on the work of these stations.

“There is negligence in searching for these unlicensed plants, given the lack of logistics and equipment necessary to monitor their work. This is not to mention that Israel bans the entry of any equipment or logistics to this effect,” he said.

Mohamed Rizk, the owner of a water desalination plant in northern Gaza, told Al-Monitor on condition of anonymity that many plants are operating illegally, without any regulation on the desalinated water that is being sold to citizens.

“There is a lack of supervision over desalination water plants and some of them are illegally established. These stations are not only selling unhealthy water, but they are also depleting groundwater in unlimited quantities, and dispose of their waste in a nonenvironmental manner by burying it in the sand or dumping it into the sea, thus contaminating soil and seawater,” Rizk told Al-Monitor.

He added, “This has led each plant to produce water with a different taste and smell, which clearly indicates the lack of real supervision that should force water plants to follow health standards and specifications.”

For his part, Tibi confirmed again that many problems mar the water desalination process. “After desalination, the water becomes unhealthy and demineralized with a microbiological pollution rate of 18%, which could cause many diseases for consumers in the long run, including kidney disease and osteoporosis,” he said.

The European Union and UNICEF opened in March 2014 a project to build a desalination plant to turn seawater into fresh drinking water in the Gaza Strip, at a cost of an estimated 10 million euros ($11.7 million).

Sheblak said, “Work is ongoing to establish this station that would provide 20,000 cubic liters of desalinated water to 75,000 people in Gaza by 2016.”

He stressed that work in this station will not stop but “will continue to expand until the production reaches 150,000 cubic liters of water per day in 2017, so as to meet the water needs in the southern and central provinces of the Gaza Strip.”

With regard to the residents of the Gaza governorate and the North Gaza governorate, Sheblak said that there is another station being designed and established under international supervision. The station aims at producing 10,000 cubic liters of drinking water per day by 2016, to provide services for these two governorates.

“The plan was to establish these two stations back in 2004, but the political volatility and internal Palestinian differences, in addition to the Israeli wars on Gaza, impeded the progress of this project more than once,” Sheblak added.

Palestinians are eagerly waiting for the completion of these stations to be finally able to consume fresh drinking water. However, Sheblak fears that these projects have a long way to go given the acute electricity crisis plaguing the Gaza Strip.