Gazans were already suffering from water scarcity even before the Israel escalation that damaged most of the water plants and pipelines. 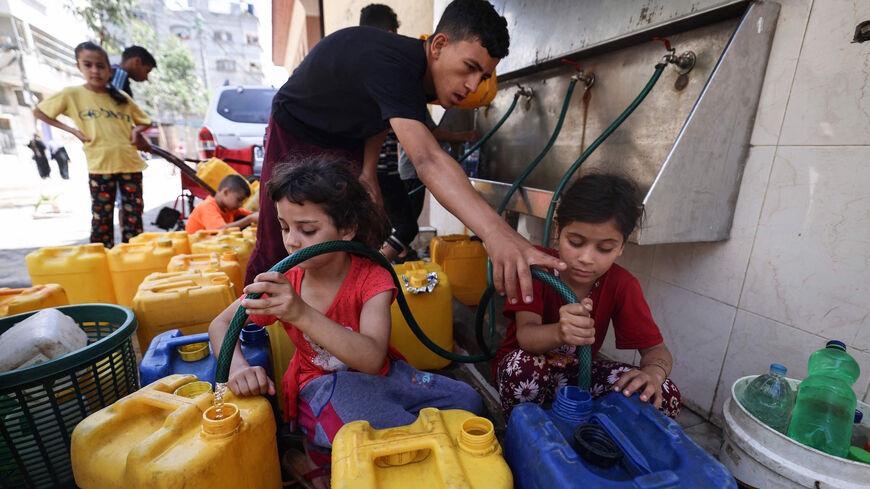 Palestinian children fill up gallons with water in Gaza City on May 20, 2021. - MAHMUD HAMS/AFP via Getty Images

GAZA CITY, Gaza Strip — The municipality of Gaza City launched May 23 a large volunteer clean-up campaign in the city, following the recent Israeli escalation on the Gaza Strip. The escalation, which ended May 21 and dragged on for 11 days, left behind severe damage to the infrastructure, sewage plants and electric grid in the coastal enclave. In addition, new environmental and health crises were added to the list of crises that the Gaza Strip already suffers from due to the Israeli siege that has been ongoing for 16 years.

In a May 20 statement the municipality said the Israeli strikes on two water pipelines of 14 and 16 inches in diameter in the Gaza district of al-Saftawi halted water supply to 20% of the city’s population, i.e., nearly 200,000 people. The suspension of water supply has aggravated the water crisis in Gaza, which is caused by the Israeli deliberate attacks on water pipelines, it added. The statement indicated that the municipality began its inspection to temporarily repair the damage and ease the water crisis caused by the strikes.

The targeted water pipelines in the recent escalation are 6,000 meters (3.7 miles) in length, causing a water crisis and shortage to some parts of Gaza.

Hosni Mhanna, spokesman for the municipality of Gaza City, told Al-Monitor, “The Israeli strikes caused a great deal of damage, because the road network in Gaza was a direct target. Nearly 70 streets were hit, which destroyed nearly 130,000 square kilometers [roughly 50,000 square miles] of sidewalks and street tiles.”

He said that sewage networks extending more than 10 kilometers (6.2 miles) in length were destroyed. The fact that sewage plants were directly targeted caused wastewater leaks to the seashore, which has led to a health problem and unpleasant odors in most parts of the Gaza Strip. He noted that the municipality hastened to conduct initial repairs.

“[Water] treatment and sewage plants stopped operating, which has led to a drinking water crisis in the city. Water quality has been severely affected due to power cuts and the municipality's inability to operate the wells in light of the acute fuel shortages,” Mhanna noted. "The municipality tried to use generators for the operation of the wells, which was difficult due to their bad condition.”

He said that the destruction of the roads has hampered traffic and subsequently the collection of garbage, in addition to the Israeli targeting of the Johr al-Deek landfill that has the potential to cause a health crisis in Gaza, he said.

Mhanna continued saying that the desalination plants are still out of service, because they need fuel for operation, and other materials and supplies for maintenance. When it comes to the water crisis that Gaza is now encountering, the war took them years back.

He added that the municipality's losses are estimated at millions of dollars, and that the final figure is yet to be determined.

Mhanna explained that the cleaning campaign dubbed “We Will Rebuild It” is the biggest volunteer campaign conducted in partnership with various parties, and it aims to clean up the streets and remove the rubble to restore the beauty of Gaza City. Murals will be drawn on the walls in collaboration with a number of artists and painters, Mhanna said.

The deputy head of the Palestinian Water Authority, Mazen al-Banna, told Al-Monitor that the Gaza Strip has long suffered from a water crisis, and the recent escalation has aggravated it. He explained that there is an annual water deficit in the aquifer, which is estimated at 120-130 million cubic meters. This indicates that Gaza relies on the coastal aquifer for 92% of its water needs, while 6% of its needs are purchased from Israel, and 2% from seawater desalination.

He added that more than 97% of groundwater wells do not comply with the World Health Organization when it comes to the quality of drinking water, and that the fluoride levels in groundwater from wells reached 1,000-2,000 mg per liter. He noted that there should not be more than 250 mg according to international standards. The lack of funds in the water resources sector negatively affected the execution speed of water and desalination-related projects and facilities, according to Banna.

Banna further said, “Amid the economic and social conditions [in Gaza], the citizens did not pay their water and wastewater services bills [over the past years], which has affected the provision of services by the municipality, including the operation and maintenance of water facilities.”

He pointed to a project that is underway to develop water and wastewater facilities in the Gaza Strip, but the project comes in light of steady population growth. He said there are three desalination plants in Gaza, with a total production of 22,000 liters (roughly 5,800 gallons) per day. Yet the military escalation, power cuts, and shelling at the plants decreased production to 30%, he said.

“The citizens have always suffered from the poor quality of water, even before the escalation. The suffering has doubled now due to water salinity and limited quantities,” Banna added.

He explained that plants are built-in remote and border areas, which are now impeding the employees' access in operating and maintaining them after they were targeted. He said that water supply to households dropped to 30% due to the damages incurred by the water and sewage networks and that these plants are almost out of service because pipelines were targeted where wastewater is collected. This would lead to health hazards in case untreated water leaked into the sea directly, he warned.

Banna said, “The temporary maintenance services carried out by the municipalities do not exceed 20%. The losses in water supplies and networks are estimated at $10 million.”

He indicated that in case fuel and the necessary maintenance materials were not brought into Gaza, the citizens’ physical and psychological health would be affected, especially in light of the scarcity of water resources.

“We are supposed to have a central desalination plant, annually producing 55 million liters [14 million gallons] per cubic meter. Yet the siege has prevented that station from being constructed,” Banna concluded.

He stressed that this plant needs five years to be completed, in case the necessary financial support, incentives, networks and supplies were provided, which would solve a large part of the water crisis in the Gaza Strip.