The government wants to dig an artificial waterway between Istanbul’s two seas to spur economic growth, but conservationists and economists say the Istanbul Canal will prove costly for the city. 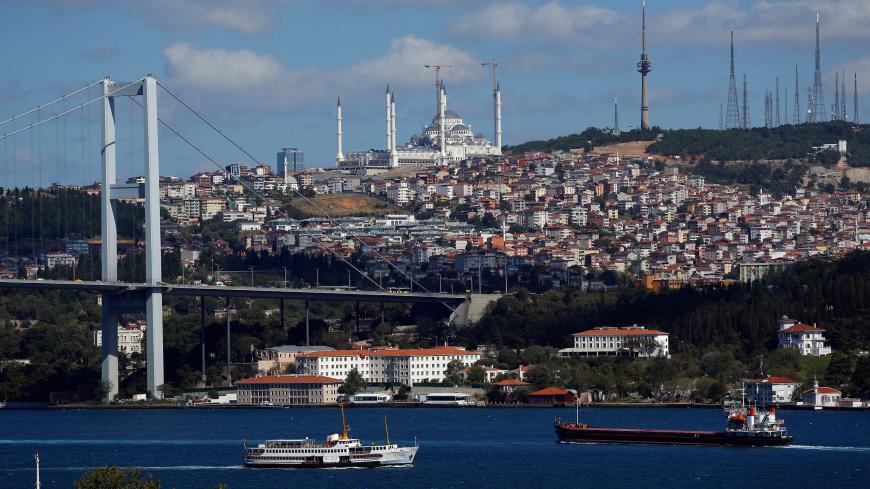 A ferry, with a new mosque under construction on Camlica Hill in the background, sets sail on the Bosporus in Istanbul, Turkey, July 31, 2017. - REUTERS/Murad Sezer

Turkey is moving forward with controversial plans to build a canal to rival Suez and Panama, but it threatens to wreak environmental havoc, destroy budgetary balances and drive sprawl in Europe’s biggest city.

President Recep Tayyip Erdogan said Oct. 10 that "ground-breaking" would take place within months for the Istanbul Canal, which he dubbed his “crazy project” when he introduced it in 2011.

“God willing, we will lay the foundation for a new canal parallel to the Bosporus, what we call the Istanbul Canal — my dream — most likely at the end of this year or at the beginning of 2018,” Erdogan said. “There is a Suez, a Panama and there will be an Istanbul Canal.”

The 43-kilometer (27-mile) canal would slice through forest and farmland to connect the Black Sea with the Sea of Marmara and render half of Istanbul an island. The project is part of the government’s $250 billion infrastructure-building spree by 2023 to power economic growth.

Supporters say the Istanbul Canal will transform Turkey into a global trade and energy hub and reduce risks posed by the 53,000 ships, many carrying hazardous materials, that each year transit the Bosporus, which twists through Istanbul and is lined with priceless villas and palaces.

The Montreux Convention of 1936 guarantees free passage for civilian ships sailing through the Bosporus and the Dardanelles at the other end of the Sea of Marmara, and it is not clear how Turkey will compel vessels to use the canal for a fee.

Environmentalists say the impact will be profound in one of the world’s most earthquake-prone nations. Pollution from Black Sea littoral states would flow to the Mediterranean, and the canal could alter sea currents and temperatures on both sides. Water pouring in from the Black Sea, which has less salinity than the Sea of Marmara, could destroy sea life.

Erdogan has already overseen a makeover of the skyline of 8,000-year-old Istanbul, digging rail and car tunnels linking Europe and Asia beneath the Bosporus and topping a hill with a $100 million mosque.

The world’s biggest airport is being constructed near the expected mouth of the canal, and a bridge and motorway, for which officials said they razed nearly 400,000 trees, are now open to reach it.

“The government is like the pharaohs, building pyramids with these megaprojects. But too much infrastructure without enough human capital to use is a waste of money,” Atilla Yesilada, an analyst at GlobalSource Partners, told Al-Monitor.

“Financing and the manner in which we build these — through public-private participation — is a disaster. The government contracts these out to private companies, which can’t finance them, so the Treasury guarantees loans and the state promises them a profit, paid through taxes,” he said. Guarantees for infrastructure likely exceed $123.5 billion.

Political patronage also plays a part, Yesilada said. Uncompetitive tenders are tailor-made for companies close to the government, which are said in turn to donate money to the ruling party to help finance lavish election campaigns.

Details of the Istanbul Canal have been cloaked in secrecy, with the unparalleled feat of engineering possibly costing three times the official estimate of $10 billion. Last month, Transportation Minister Ahmet Arslan said the government had signed a deal for surveying after choosing a route, though he did not specify the location. He also said the project will be “integrated” with the new airport and the state-run home builder is involved, rousing concerns the scheme is, at heart, a real estate development project.

The plan has already sparked speculative land purchases, real estate agents in nearby areas say. Property listings along the expected route boast of early investment opportunities, and a map at one realtor’s office shows more than a half-dozen future suburbs for hundreds of thousands of people.

“The motorway, Istanbul Canal, bridge and airport are the transportation projects needed to build a new city. Once you build the roads, people will come,” Onur Akgul, a member of the Northern Forests Defense, a group of activists working to save parts of Istanbul’s hinterland, told Al-Monitor.

For now, the area on the western fringes of Istanbul, a heaving city of more than 15 million people, is spotted with bucolic villages, archaeological heritage and streams frequented by fishermen.

On the banks of the Kucukcekmece Lake is the long-lost Hellenistic settlement of Bathonea dating to the 4th century B.C., which risks being at least partially submerged by the canal. The Yarimburgaz Cave is one of Europe’s oldest habitation sites, dating back as far as a half-million years. Researchers have unearthed artifacts there that shed light on man’s migration from Africa.

“Environmentally, culturally, historically — this area is home to unbelievable riches. It is also the center of an ecological system that includes water catchment basins and the main source of Istanbul’s drinking water,” said Akgul. “Its trees produce the oxygen we breathe.

He added, “It’s either Istanbul or the canal — we can’t have both.”