The airport is set to eventually become the world’s biggest, making Turkey a global transportation hub, but critics lament the environmental and economic costs as well as the plight of the laborers who built it. 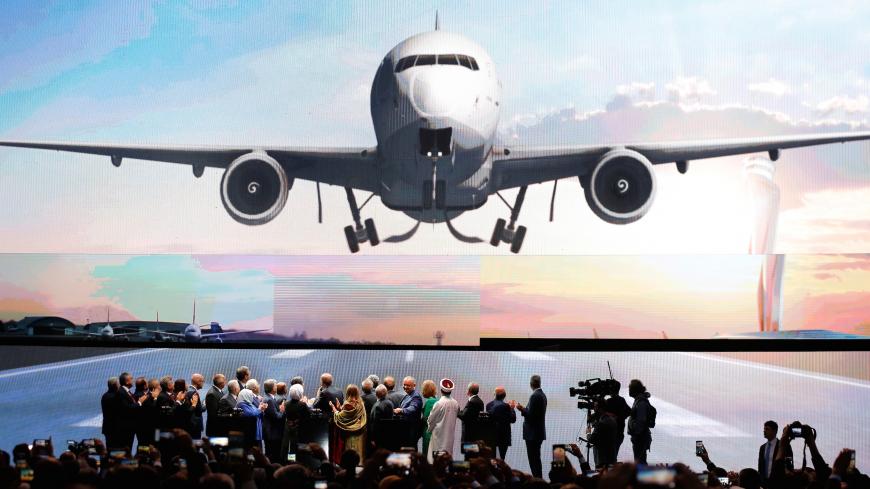 President Recep Tayyip Erdogan opened Istanbul’s new airport with a pledge that it would become the world’s biggest and serve as a symbol of prosperity for a country he hopes will become a global power.

The $11.7 billion airport crowns an infrastructure-building spree that has transformed the Turkish landscape and economy during Erdogan’s 15 years in power. But the megaproject has been tarnished by environmental degradation and labor protests over poor working conditions that led to dozens of deaths.

A crowd of thousands watched on screens as Erdogan’s jet touched down at the airport and he strode through the vaulted international terminal. Despite a race to finish it under four years, the full opening had to be delayed this month and the airport will only operate a handful of routes until the end of this year.

The lavish opening ceremony, which coincided with the 95th anniversary of the founding of the Turkish Republic on Monday, was attended by a half-dozen world leaders including Sudan’s Omar al-Bashir. Speakers praised Erdogan for his vision in realizing an unprecedented engineering feat that included moving 750 million cubic meters of soil — the equivalent of eight Suez Canals, according to an introductory video.

The sprawling facility will have three runways and handle up to 90 million passengers a year after fully opening at the end of December. Capacity will increase to 200 million people when all phases of the airport are completed in the next decade, making it the world’s busiest.

“We have given the name of Istanbul to this great monument that we made for this priceless city,” Erdogan said, disappointing his supporters who wanted it be named after the president himself.

“Throughout history, Istanbul has always held a strategic position due to our country’s geography,” Erdogan said. “We are advancing the critical role our country plays in the global economy’s integration with this airport. Therefore, we see Istanbul Airport as not just a service to our country but to the region and to the world.”

For Erdogan, the new airport is much more than a transportation hub. It is part of his relentless drive to expand the $800 billion economy, raise living standards for a population of 80 million people and transform Turkey into a global power.

Outside the airport, signs read, “This is not just an airport. This is a monument to victory,” as fighter jets performed aerial acrobatics in the sky above. Unfinished construction included a large mosque outside the terminal.

Few of the workers who built the airport could be spotted among the crowd. Thirty-one workers and union leaders are still in jail after more than 400 people were arrested last month for protesting delayed wages, unsafe working conditions and squalid onsite housing, according to Tezcan Acu, a board member at the labor union Insaat-Is.

Protesting workers “faced a disproportionate response for … simply pursuing their rights that are guaranteed in the constitution, including the right to strike and to work in fair, safe conditions,” Acu told Al-Monitor, blaming the rush to finish the project and unprofessional management for the high number of workplace accidents.

The complaints that sparked the protest, including poor food and a dangerous shuttle service, have still not been addressed, Acu said. “So many people have suffered for this project, built under inhumane conditions.”

The government claimed in February that 27 of a total 36,000 employees on the site had died during construction, while labor unions estimated the number of deaths at 38, Acu said. Human Rights Watch reported on Monday that underreporting of deaths and a failure to thoroughly investigate accidents means the loss of life may be higher than official figures.

“The government advertises Istanbul’s new airport as the biggest in the world, but the prestige project has been marred by reports of accidents and arrests of protesting workers,” Emma Sinclair-Webb, Turkey director at Human Rights Watch, wrote in the report. “It is imperative for the authorities to improve working conditions and investigate deaths and injuries rather than using the police and courts to stifle workers’ demands.”

The latest death was reported last week, when an unidentified worker’s body was discovered in a manhole.

The airport and related industries are expected to be worth 4.8% of gross domestic product by 2025, and the companies that built the project will pay $22.5 billion in rent, according to the video.

Erdogan denied that the airport comes with a Treasury guarantee for the companies that built it. He said just a “symbolic” 342 million euros ($389 million) in revenues were guaranteed. But critics say that creates an onerous burden on state finances at a time when Turkey is grappling with an economic slowdown, soaring inflation and a currency that has lost a third of its value this year.

Building it in on the far outskirts of Istanbul near the Black Sea doubles the distance to the main airport for most Istanbul residents and increases the country’s fuel bill, wrote Ozgur Gurbuz in Birgun newspaper.

“We don’t discuss how Ataturk Airport is just being trashed. Ataturk Airport could have been expanded … [It] is the size of London’s Heathrow but handles 20 million fewer passengers,” he said.

A million trees were razed to build the airport and a connecting motorway in what was once forest and farmland and home to Istanbul’s drinking water supply, rare species of flora and fauna and migratory bird flyways. On the day of the opening, environmentalists called for the airport to be dismantled.

Opposition politicians have accused Erdogan of building a vanity project. In an emailed statement, Sezai Temelli, who leads parliament’s third-biggest group, the People's Democratic Party, said the airport “is for the administration to enrich pro-government capital. Tens of thousands of trees were cut down, and now the economy is being dragged into a black hole it cannot escape.”