A labor protest demanding better conditions and a safer workplace at Istanbul’s controversial new airport, due to open in six weeks, lands 24 workers in jail pending formal charges. Officials say they are provocateurs seeking to sully one of Turkey’s grandest infrastructure projects. 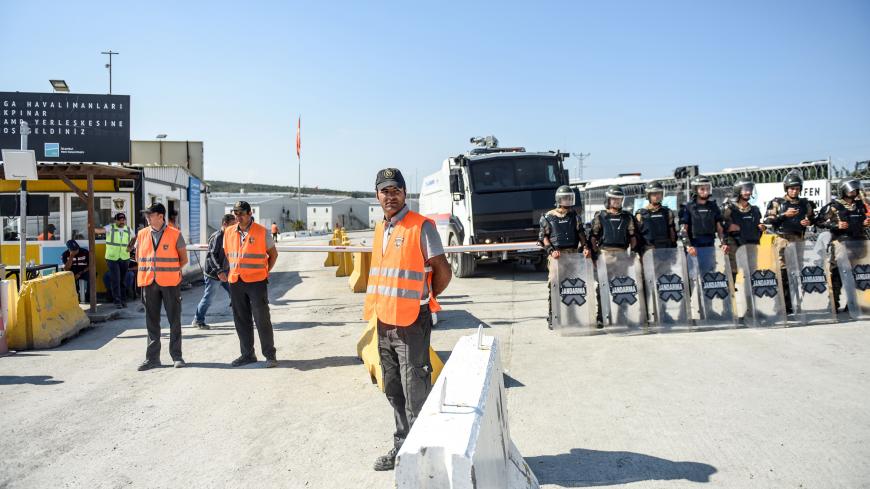 Security members and gendarmes are seen at the entrance of the building site for Istanbul's new airport, Sept. 15, 2018. - BULENT KILIC/AFP/Getty Images

A Turkish court on Wednesday jailed 24 workers, including four union leaders, pending formal charges for their alleged roles in a protest at Istanbul’s new $13 billion airport.

The case has cast a harsh light on the country’s bleak labor conditions and threatens to mar President Recep Tayyip Erdogan’s latest prestige project: one of the world’s biggest airports that will serve some 90 million passengers. The airport is set to open Oct. 29, coinciding with the 95th anniversary of the founding of the Turkish Republic.

The workers’ complaints, including dozens of deaths due to an unsafe working environment, underscore why Turkey ranks among the world’s worst countries to be a worker.

The court released 19 people but they are subject to judicial controls ahead of a prosecutor's indictment, the builders’ union Insaat-Is, said on Twitter.

Security officers raided the airport’s construction site and detained 400 people after workers demonstrated on Sept. 14 over a shuttle bus crash that injured 17 employees. Most of the 400 people who were detained have been released, Istanbul’s governor said.

Conditions have worsened in recent months as contractors race to finish the facility in time for its slated opening, with workers spending up to 70 days on the job without a break, according to an anonymous worker interviewed by online broadcaster Medyascope.tv.

The worker described “countless deaths” at the site, as well as ambulances not turning on their sirens so as to conceal when they collected injured or dead workers following accidents. “They hide it,” he said.

The Transportation Ministry said in February that 27 workers, out of a total 36,000 employees, had lost their lives since construction began in 2014. The ministry denied a report by Cumhuriyet newspaper that quoted unnamed laborers who estimated that 400 people had died and that 500 or more workplace accidents occurred each week.

Work was halted during the protest against unpaid or delayed wages, shoddy safety standards and filthy housing at the onsite camp where many of the workers live. Footage showed workers setting fire to their uniforms and helmets, and gendarmes setting off tear gas and carting off protesters as armored riot control vehicles prowled the site.

The security operation aimed to prevent “various kinds of exploitation,” and authorities detained some people who were not employed at the site who “were attempting provocative actions,” Istanbul Gov. Vasip Sahin said, according to media reports. “The employer has begun work to eliminate the problems of the employees of the airport construction.”

Pro-government media described the protesting workers as “terrorists,” prompting additions to the satirical online dictionary Eksi Sozluk under the definition: “The 405 terrorists who infiltrated the third airport.”

The response to the protest “shocked” union members, underscoring how “sensitive” the airport project is, Kadir Kurt, organizing secretary at Insaat-Is, told Al-Monitor. “We were publicly called terrorists. We cannot understand the reaction a legal protest created. These workers were asserting their democratic rights,” he said.

The crackdown, according to Kurt, is “aimed at stirring fear to prevent workers elsewhere from demanding their rights … which are all written into law and the violation of which should be subject to prosecution. The biggest problem is that the bosses don’t regard the worker as a human being.”

A consortium of five Turkish companies — Cengiz, Kolin, Limak, Mapa and Kalyon — are building the airport and will pay the government about $26 billion annually to operate it for 25 years.

The airport stretches across nearly 77 million square meters of former forest and farmland near the Black Sea coast. A million trees were felled in the construction of the airport and a connecting motorway, according to government estimates.

Erdogan’s jet made a symbolic first landing in June ahead of his successful re-election bid, in which he campaigned on an infrastructure-building spree he says has improved Turks’ standard of living, created jobs and fueled economic growth, which has averaged nearly 7% annually this decade.

But the estimated $250 billion and Treasury guarantees for mega projects and other construction schemes have helped swell the country’s debt, created huge trade imbalances and wrecked budget discipline.

Ayse Acar Basaran, a lawmaker with the opposition Peoples’ Democratic Party, described the airport as “a plunder of nature whose tenders went to loyalist companies, violating workers’ rights and [causing] deaths."

Basaran said in an e-mailed statement, “Just for declaring, ‘We are not slaves,’ they have been branded ‘terrorists’ in order to distract from the workers’ justified demands.”

The Transportation Ministry said on Tuesday it was compelled to issue a statement after opposition lawmakers “attempted to turn this into a provocation."

The statement said, “This project is Turkey’s project of pride, and no one has the power to stop or obstruct it. As we promised our people, it will open Oct. 29, 2018, honored by our president, Recep Tayyip Erdogan.”

The ministry also said it had met with the consortium, which had in turn instructed the nearly 500 subcontractors to resolve any problems, but it denied shortcomings in hygiene, health, drinking water and food standards.

Unfortunately, the only reprieve for Turkey’s beleaguered workers may come if they lose their jobs in the economic slowdown. Already, the jobless rate is above 10%, inflation has hit a 15-year high and the lira lost as much as 60% of its value this year as the construction-fueled economy overheated.

Erdogan said last week he will have to shelve some of his grand projects as a savings measure to shore up the economy.

In the meantime, work grinds on at the airport. On Sunday, exhausted airport workers crammed into a city bus traveling on dust-covered roads on the outskirts of Istanbul. Those who found seats sat slumped over to sleep off their last shift. None would comment for this story, expressing concern for their jobs should they speak with the press.

Update: Sept. 19, 2018. This article was updated after 24 workers were jailed Wednesday.