Istanbul’s mayor faces off with Erdogan over 'crazy' canal

Ekrem Imamoglu, who wrested control of Turkey’s largest city from the ruling party in a contentious election this year, calls plans to build a waterway between Istanbul’s two seas a "disaster." 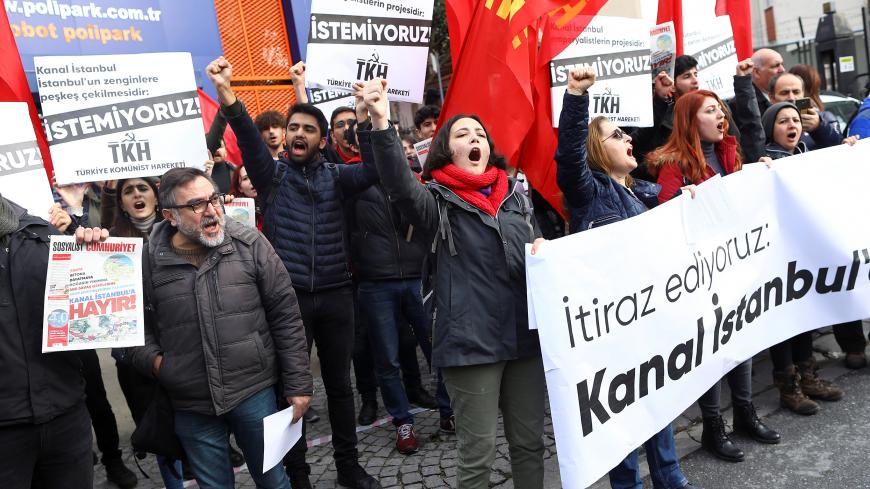 ISTANBUL — Ekrem Imamoglu, Istanbul’s new mayor, has squared off against his powerful rival President Recep Tayyip Erdogan over government plans to build a canal that would render half the city into an island, warning the project will wreak ecological and economic devastation.

Canal Istanbul, an artificial waterway that would link the Black Sea with the Sea of Marmara to bypass the vulnerable Bosporus Strait, is Erdogan’s signature project, which he acknowledged was “crazy” when he unveiled it in 2011. Government estimates of the cost are between $13 billion and $20 billion, while some economists estimate the final price tag is likely to be twice as high.

Imamoglu, who has emerged as a potential challenger to Erdogan after winning control of Istanbul’s city hall earlier this year, formally withdrew the municipality from a cooperation agreement on Canal Istanbul last week, calling it a “a disaster project … that will massacre the environment.”

It will destroy water reservoirs, aquifers and a catchment system that together supply drinking water to almost a third of Istanbul’s 16 million residents, Imamoglu said at a news conference on Dec. 25. Excavating an estimated 2.5 billion cubic meters of earth will increase the risk and severity of earthquakes in Istanbul, which sits on active fault lines, he said.

“At a time when the world is discussing water shortages and climate change, no intelligent, rational public official or politician who has not lost touch with reality can support this project or consider this betrayal of his country, his city and his people,” Imamoglu said.

The 45-kilometer (28-mile) waterway would slice a 400-meter-wide swath through forests and farmland west of Europe’s largest city, wrecking archaeological sites and animal habitats. The World Wildlife Fund has warned of “irreversible calamities for ecological systems.”

The Black Sea’s low-salinity and low-oxygen water would pour into the Marmara, killing marine life and blanketing Istanbul with the smell of hydrogen sulfide, according to research by Cemal Saydam, an environmental engineer at Hacettepe University.

But Erdogan said last week the canal does not carry such environmental or seismic risks. Imamoglu has no authority over the project, he added, and hinted the mayor could face legal and political repercussions for failing to fulfil his responsibilities.

“They are trying to end the project before it begins with some claims that have no scientific, logical or reasonable explanation,” he said. “Canal Istanbul will be built whether you like it or not.”

Economic growth in Turkey over the last decade has been largely driven by construction, including a $250 billion target of large-scale infrastructure projects. A highway, bridge and new airport that Erdogan hopes will eventually be the busiest in Europe have already been built in conjunction with the canal, clearing 250 million trees in the process.

New suburbs along the canal will swell Istanbul’s population by 1.2 million more people. The canal “is part of a real estate development project. Since it was first announced, there have been speculative purchases of land along the planned route. If the canal were suddenly canceled, you would confront a powerful real-estate lobby,” Akif Burak Atlar, head of the Istanbul’s Chamber of City Planners, said in an interview.

Supporters say infrastructure investments boost economic growth and improve lives, bringing roads and hospitals to underserved communities. At a time when a sharp slowdown has pushed the unemployment rate to 14%, Erdogan said construction of the canal alone will create almost 10,000 new jobs.

He also said the new shipping lane will save the congested Bosporus Strait, the winding natural waterway that bisects Istanbul between Asia and Europe. Each year, some 80,000 ships, many carrying hazardous materials, use the strait, jeopardizing the lives of two million people, the government says. In a cogent reminder of the dangers, a cargo ship ran aground on Dec. 27.

Commercial ships currently pass through the Bosporus for free, a right granted under the 1936 Montreux Treaty, but many will opt to pay to use Canal Istanbul to reduce expensive moorage times, Environment Minister Mustafa Kurum said last week.

Imamoglu launched his salvos as the government approved an environmental impact report, and he called on the public to register its objections with the authorities. Thousands have formed long lines in the rain at local government offices during the report's 10-day public review period, which ends on Jan. 2.

“Environmental impact reports are no longer a regulatory mechanism but are prepared by construction companies and are not an objective assessment of the risks,” Atlar said, adding that environmental, scientific and other experts have been shunned from the process.

A small survey of 500 people in Istanbul conducted by Arti Bir Research last week showed nearly two thirds of residents oppose the project. Across the country, Turks are more equally divided, with 43% believing the canal will harm the environment and 40% who do not, according to a poll of 1,537 people conducted by Istanbul Economy Research. Only 36% believe the canal will contribute to Turkey’s economy, it showed.

Imamoglu has pledged to “build bridges” with the government after a contentious election in which Erdogan’s party lost control of Istanbul and its $4 billion budget for the first time in a quarter century. The opposition candidate narrowly won an initial vote on March 31, and Erdogan forced a do-over election that Imamoglu then won by a record margin.

Imamoglu said his objections to Canal Istanbul were not politically motivated, but he did campaign against the government’s large-scale infrastructure projects and the patronage system they help sustain, said political scientist Edgar Sar, chairman of the IstanPol think tank.

“Imamoglu’s win was based on his ability to unify the opposition into a bloc against Erdogan. For him to continue his political career, he has to sustain and expand that bloc … or otherwise risk losing support for not speaking out against this project, which represents Erdogan,” Sar told Al-Monitor.

“Imamoglu’s harsh, bold stance carries risks, but it’s clear he sees this as an opportunity. With the economy in such bad shape and the environmental impact so severe, the project, which has a questionable rationale, appears to be one driven by Erdogan’s determination,” he said.

Indeed, opposition figures are lining up against the canal. Ahmet Davutoglu, Erdogan’s former prime minister who broke away to form a new party this month, said he had warned the president against the canal two years ago and that building it would undermine Turkey internationally. Another opposition leader has called for a public referendum.

A spokesman for the Peoples’ Democratic Party, parliament’s third-biggest party, said the project would incur a 100-billion-lira ($17-billion) tax bill for Turks. “Canal Istanbul is both an economic disaster as well as an ecologic disaster for society, mortgaging Turkey’s future,” Gunay Kubilay told reporters last week. “Handing over the country’s assets and resources to foreign capital will thrust Istanbul into a climate crisis and threaten lives.”

Erdogan has promised a tender for the construction in the coming weeks, and speculation is swirling that China will get it. Among the real estate speculators are members of the Qatari royal family, according to news reports.

It is unlikely Erdogan will abandon a dream project that carries geostrategic significance for Turkey, even if it lacks clear public support, said IstanPol’s Sar. “Erdogan has linked the survival of his administration to the canal’s construction, for both economic and political reasons,” he said. “Erdogan loves a good fight, it’s at the core of his politics. But he is not taking these risks for nothing.”