The ancient city of Zabid, located in Yemen’s western coastal plains, is threatened by the ongoing fighting in the country and the corruption of local officials. 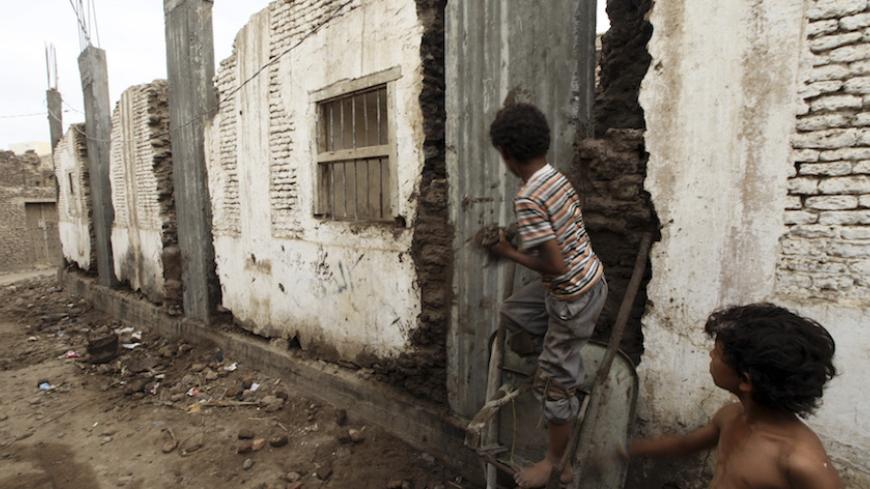 Boys are seen at the side of a damaged house in the historic city of Zabid in the Yemeni province of Hodeidah, May 15, 2013. - REUTERS/Mohamed al-Sayaghi

SANAA, Yemen — One of Yemen’s most important ancient cities, Zabid, is struggling to maintain its cultural significance amid the destruction of war and simple neglect by city officials.

The armed conflict that has erupted in Yemen has resulted in serious damage being inflicted to most of the country’s cultural and heritage sites. Some historic buildings and cities have been the scenes of clashes, and archaeological sites and museums have sustained damage from bombing.

The threats facing Yemeni sites prompted UNESCO to announce an emergency plan in May to deal with these risks, which have become a real challenge that could severely damage Yemenis’ cultural and material heritage.

While it is not unique in its situation, the historic town of Zabid near Yemen’s western coast holds particular scholarly and religious significance for Yemenis. The city is on UNESCO’s List of World Heritage in Danger.

UNESCO added Zabid to the list of World Heritage Sites in 1993, and it has been on the danger list since 2000. The town is recognized for its cultural and intellectual value, which gave rise to the first Islamic university in the country. In addition, it has historically been a place of pilgrimage for many foreigners seeking to study religion, especially those from Eastern Asia.

Zabid’s renown is associated with the city’s religious aspect. Its residents were among the first to embrace Islam, and it is the birthplace of Abu Musa Ashaari, a companion of the Prophet Muhammad and an important figure from the early days of Islam. After Ashaari accepted Islam while traveling to Mecca, Muhammad sent him to his native land to propagate the faith, and they answered his call. After Ashaari returned with fellow converts to Mecca, the prophet is said to have told the townsfolk: “The people of Yemen have come to you and they are gentle and soft-hearted. Belief is Yemenite and wisdom is Yemenite.”

The director of the Zabid office of the Yemeni Antiquities Authority, Arafat al-Hadrami, told Al-Monitor that Zabid served as the Yemeni capital from the 13th to the 15th centuries, “and its influence extended beyond the country’s borders, given that it was home to the first Islamic university.”

Hadrami added, “Zabid served as a model for other Islamic Arab cities, in terms of its organic layout that centered around a mosque and popular market — in addition to its narrow streets and homes that included a closed interior courtyard. [The town’s structures] are known for their unique character, in particular in terms of their beautiful architecture and decoration.”

Zabid comprises 950 historical homes constructed in the traditional manner, 10% of which are in such bad condition that their owners have abandoned them, Hadrami noted. In addition to 85 mosques and an Islamic school, the city is home to other historic landmarks such as ancient city walls, gates, traditional sites for washing linens, a guest house, a palace from Yemen’s Imamate era, a fortress, guard houses and fountains used for obtaining drinking water.

He added that most of the houses are built from traditional materials for which Yemen is famous, including mud bricks, limestone and various types of wood.

Perhaps worse than neglect are concrete architectural modifications that have been made, particularly to historic religious schools and mosques. “This threatens the ancient and unique character of the city, which lacks regular maintenance for historic buildings,” Hadrami added.

In parallel, Zabid’s role in the religious and educational fields has also regressed. That decline can be attributed to a number of factors, most notably “looting of the city’s religious endowments that has been carried out by corrupt influential figures in power,” said Hadrami. "The money allocated to the Awqaf [religious endowments authority] was the only source of funding to cover religious studies students’ expenses for food, drink and clothing. In addition, a stipend was given to foreign students who came to the city for study, with such students numbering over 5,000 nearly 30 years ago.” The students came from Southeast Asia and North Africa, including Egypt, Tunisia and Algeria.

The corruption of these influential figures who took control of religious endowments allocations also diminished the religious and cultural role of the city. It has reached the extent that Zabid’s historic renown is now akin to a mere tale from history.

For his part, Ahmed al-Naami, a Yemeni researcher from Zabid, said the city represents “the historical importance of the Tihama region in the western plains of Yemen.”

“It was a hub for students coming from all lands,” he added.

Naami told Al-Monitor, “The city is facing a very tragic reality, as many historic palaces and structures are being destroyed — including the city’s ancient wall, which surrounded Zabid for more than 10 centuries. In addition, there is corruption in the local administration, which carries out business in the name of the city and takes advantage of Zabid’s renown to extort local and international organizations.”