2018 'year of archaeological discoveries' for Egypt 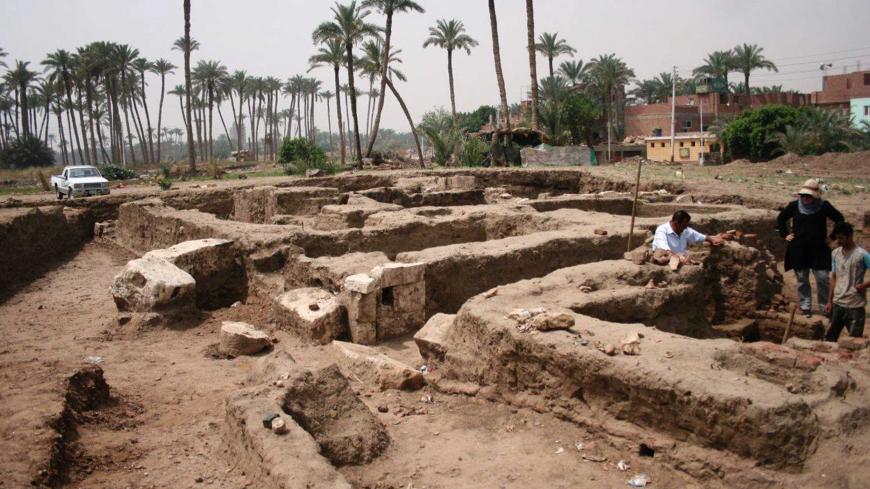 Archaeologists, tourism experts and economists are upbeat about Egypt’s newly announced archaeological discoveries, expressing hope that the discoveries would give a push to the country’s tourism sector.

Egyptian authorities announced the latest discovery on Sept. 25 of an ancient "massive building" — thought to be part of a residential block from the ancient Egyptian capital of Memphis — in Mit Rahina, 20 kilometers (12 miles) south of Cairo.

Earlier in September, two key discoveries from the Pharaonic era were made in the southern city of Aswan. On Sept. 22, the Egyptian Ministry of Antiquities announced the discovery of a number of Pharaonic mummies in a Pharaonic tomb dating back 2,500 years ago. On Sept. 16, the Egyptian archaeological mission, which was carrying out excavations at the Kom Ombo temple, unearthed a sandstone Sphinx statue.

On Sept. 2, remains of an Egyptian village dating back to the modern Stone Age were unearthed in the Nile Delta governorate of Dakahlia during excavation works in the Tell el-Samara area.

Also discovered over the past few months is a rock tomb in Giza, a huge sandstone statue of King Ramses II and the oldest workshop for manufacturing pottery in Aswan, among others.

“These discoveries are considered a major achievement at the archaeological level. They also demonstrate that Egypt is still full of monuments and ancient treasures that have not yet been unearthed,” Zahi Hawass, an Egyptian archaeologist and former minister of state for antiquities affairs, told Al-Monitor.

Hawass said the government has excelled in raising global awareness about the discoveries and promoting Egypt’s tourism sector. “The current minister of antiquities is keen on holding news conferences with international journalists to announce these discoveries. This gives a very good message about Egypt to the world and encourages tourists interested in culture and archaeology to come and visit Egypt,” he said.

Taking good care of existing archaeological sites is just as important as announcing new ones, Hawass said. “It is very crucial that the government works more on making the current tourist and archaeological sites more appealing and making sure that they are properly presented to those interested, especially foreign tourists. Many antiquities need to undergo restoration,” he added.

Despite praising the new discoveries and highlighting the positive effects on tourism and the national economy, some tourism experts have raised concerns that some of the unearthed statues might end up in the attics of the Antiquities Ministry.

“The government has to make sure that these discovered antiquities are restored and displayed in Egyptian museums or on site with the right protection. They should not be discovered and then abandoned,” Hossam Akawy, a Cairo-based tourism expert and member of the Egyptian Chamber of Tourism Companies, told Al-Monitor.

Akawy said the Ministry of Antiquities has to set out a comprehensive strategy to finance the restoration of the newly discovered antiquities as well as restore current archaeological sites and monuments. “This way, new and old discoveries will be preserved and will be a booster for both the country’s tourism and economy,” he said.

Egypt’s tourism, which was severely affected by the 2011 uprising and terrorism in the early and mid-2010s, has shown signs of improvement over the last few years. A government official told Reuters in August that Egypt’s tourism revenues increased by 77% to stand at around $4.8 billion in the first half of this year, compared with the same period a year earlier. The official said the number of tourists visiting Egypt in this period rose by 41% to reach five million.

“The archaeological discoveries can give an unprecedented push to Egypt’s tourism sector because Egypt mainly attracts tourists who are interested in Egypt’s archaeology and civilization,” Ahmed el-Shami, an economist and a professor of feasibility studies at Ain Shams University, told Al-Monitor. “If well-managed, these discoveries can be a golden goose for the government,” Shami added.