Without the proper funds and equipment to excavate its archaeological discoveries, Egypt risks losing monumental finds to exploitation. 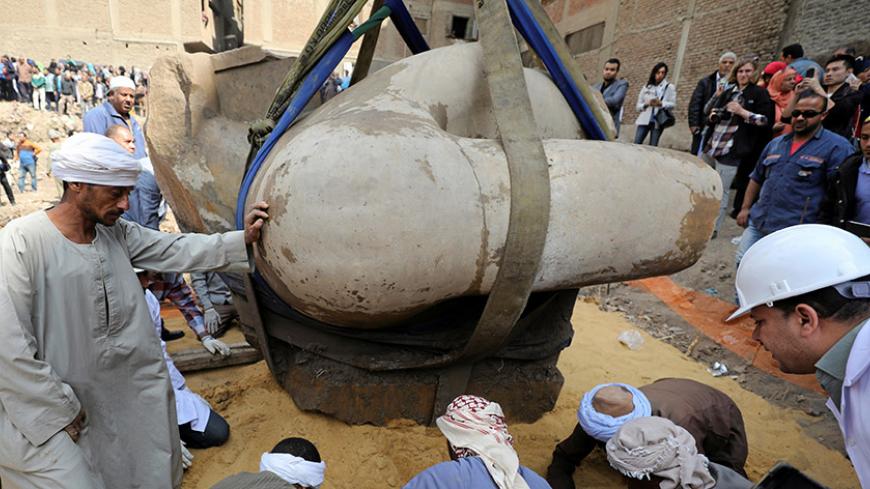 Egyptian workers help as a statue of King Psamtek I is lifted from the ground in the Matariya area of Cairo, Egypt, March 13, 2017. - REUTERS/Mohamed Abd El Ghany

As a recently discovered pharaonic statue was being pulled out of groundwater in the Cairo slum of Matariya, children gathered around, chanting, “There is nobody like Ramses II!” Egyptians have always been proud of their ancient heritage, but such heritage is neither being handled correctly nor being put to good use to attract much-needed tourists.

In between the announcement of the discovery and the housing of the massive statue at the Egyptian museum is a process replete with flaws.

On March 10, authorities were quick to shout about “one of the most important recent discoveries”: a 9-meter, 7-ton quartzite statue believed to depict King Ramses II. Not only was its grand significance brushed off, but the rush to attract international attention led to false information: The statue turned out to be that of King Psamtek I.

“Discoveries are being made in Egypt every day; I think that labeling it as 'one of the more important recent discoveries' may be a bit of hype,” said Amy Wilson, archaeologist and adjunct professor of history at the State University of New York at Cobleskill. A monumental building complex was discovered by a German-Egyptian expedition in Qantir in February. Two other discoveries followed the week after the statue was unearthed: the first an unopened 4,000-year-old tomb in Aswan, and the second an alabaster statue of Tutankhamun’s grandmother in Luxor.

Agreeing that the discovery was the most sensational among many, archaeologist and founder of Egypt's Heritage Task Force Monica Hanna spoke about how the 3,000-year-old statue was unearthed with a heavy construction crane.

“There is no set of best practices or manual of handling objects, so different individuals depend on their own experience, no matter how little it is,” Hanna said.

Former Minister of Antiquities Mamdouh al-Damaty told Al-Monitor that the ministry does not own the appropriate excavation equipment; thus, they had to borrow it from the military. “The lifting was conducted incorrectly,” he added.

The water should have been pumped or frozen. There should have been enough documentation and stratigraphy when the water dried out, and then the statue ought to have been extracted with pulleys while being tied with ropes. “Generally, the process needed to be slow,” Hanna explained.

The first part of the statue to see light was the head, which was left outside for days without precautions against tampering by passersby. Photos of residents leaning on it sparked public anger.

“Anyone visiting an archaeological site should take great care not to touch reliefs or monuments because the oils in one's hands will eventually cause it to deteriorate,” Wilson stated.

But Hanna approved of the children posing and snapping photos at the site where they used to play. “This is their only access to cultural heritage. How many kids in Matariya have been to the museum? How many kids have been taken onto a site and had a proper explanation of the excavation?” she said.

More public outreach is needed in local communities where archaeological finds occur. “This way people will learn more about their amazing heritage and not feel so polarized by the foreign archaeological missions that do the fieldwork,” said Wilson, who also suggested that at the end of every field season, archaeological missions could have a community presentation, telling the community about the work that was completed, what they accomplished, what they found and why the discoveries are important.

Former Ministry of Antiquities Minister Zahi Hawass, who had also asserted that the newly discovered statue belonged to the third pharaoh of the 19th dynasty, King Ramses II, since it was found at the entrance to his sun temple, had previously stripped the area of historical significance. Under Hawass' term, the land was ceded to the Ministry of Endowments, and Al-Khamis, a local market, was built on it — an act of “mismanagement" to say the least, said Hanna.

The temple was destroyed in Greco-Roman times. Many of its stones were looted and its obelisks were moved to Alexandria or Europe, according to The Independent. Its size was almost double Luxor's Karnak temple, making it one of the largest in Egypt. Against popular will and even amid the potential to enrich local museums, Damaty believes that "attempting to retrieve these Egyptian artifacts from abroad is not in Egypt’s favor," as they are good representations of Egypt to the rest of the world.

Meanwhile, an Egyptian TV channel turned the heat up a notch: A poll asked Egyptians if they would agree to sell monuments in order to solve the current economic crises, over which Hanna commented, “The question in itself is a crime.”

Egypt's heritage needs a long-term strategy for the next 10 years, and a new minister would be the executive to this plan instead of reinventing the wheel with every Cabinet shuffle, Hanna said. Damaty also stressed the need to raise awareness via education in schools, families and media campaigns, all of which reach society most effectively.

Meanwhile, the mishandling of Egyptian heritage bleeds into the tourism sector.

“People come to Egypt not just to see antiquities; they come to see heritage. This is a completely different thing,” Hanna said. Although foreign tourists enjoy experiencing the complex of the people living within the heritage, Egyptian authorities want to clear archaeological sites of people so that they become open-air museums. “Cutting out the people cuts out a very large part of the tourism asset. Visitors want to see how modern Egyptians are creating a new, historical layer,” she added.

This philosophy should also change the distribution of the tourism economy, which was previously monopolized by big companies, shops and hotels. “Tourism should be a means for community development in areas of very high poverty,” said Hanna.

Among reforms needed is continuous linguistic and historical training for tour guides, even after they obtain licenses, Hanna stated. Their information should be proven accurate, she added, because sometimes what one guide says clashes with what another says. Also, the sound and light shows need updating, because the present information is from the 1990s.

“I think most foreigners who have never been to Egypt before are [hesitant] to come because they do not think the country is safe,” Wilson said. “They must first be reassured that Egypt is a safe place to visit, which it is. After that, spur their interest with news of recent discoveries.”