The 30 uniquely well preserved coffins recently found in Egypt's southern city of Luxor are a godsend to Egyptian tourism. 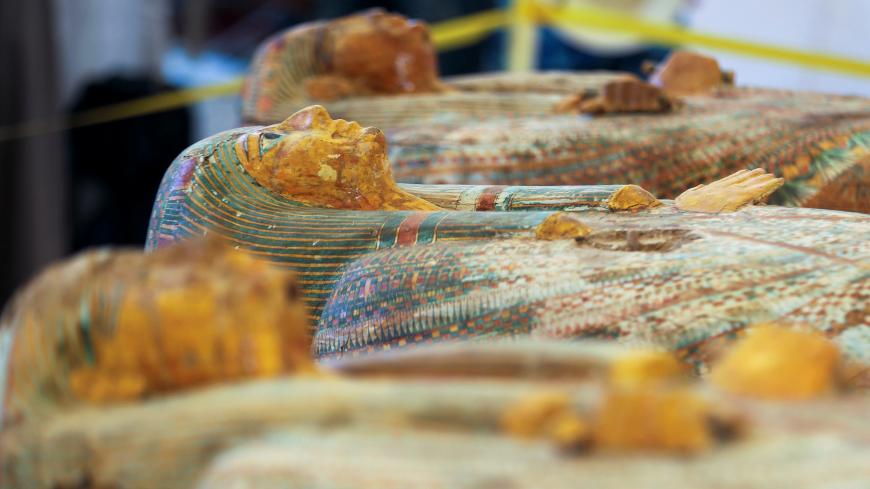 Ancient painted coffins are seen at the necropolis of Al-Asasif, unveiled by Egyptian antiquities officials in the Valley of the Kings, Luxor, Egypt, Oct. 19, 2019. - REUTERS/Mohamed Abd El Ghany

Egypt's Minister of Antiquities Khaled el-Anani called the discovery of 30 finely painted wooden coffins in the southern city of Luxor “the greatest discovery in the nation’s modern history.”

The 30 coffins, which contained the mummies of men, women and children, were discovered in the area of Al-Assassif, a necropolis on the Nile's west bank. Unlike most of the coffins discovered in the last few years, they were unopened.

At a news conference in Luxor on Oct. 19, Anani said that all tombs date to the 22th Egyptian dynasty, which ruled between 1070 and 712 BCE.

The minister said that a high priest is believed to have collected the coffins in a later Pharaonic period and placed them in a more secure location in Assassif to protect them from theft.

He said that 23 of the coffins were men, five women and two children. They were untouched and in good condition, their colors still vivid and inscriptions complete, the minister said.

Zahi Hawas, an Egyptologist and head of one of several Egyptian archaeological missions that discovered the tombs, said that they are destined for the Grand Egyptian Museum due to open by the end of 2020.

In 2018, Egyptian archaeologists made several key discoveries, including a number of Pharaonic mummies in a tomb dating back 2,500 years and a sandstone Sphinx statue.

"This cache of tombs is the fifth to be discovered in Egypt. The other four were found in the 1800s. But the importance of this one is the fact that it is intact and was not opened before,” Hawas told Al-Monitor over the phone following the minister’s news conference. Hawas said that the previous four, most of which were discovered in the late 19th century, were not “intact like this one.”

Hawas confirmed to Al-Monitor that the inscriptions — words from the Book of the Dead — were clear and complete. Similarly, Moustafa Wazeeri, the secretary general of the Supreme Council of Antiquities, told reporters that the cache will provide insight into the different processes for making coffins in that period. Some of the coffins have decorations and colors, while others are unadorned, which may indicate that decoration traditions might have changed over time.

“The world is watching this great discovery right now. If billions of dollars were spent by the government on attracting tourism, they would not have the same effect as what is taking place in Luxor right now,” Hawas told Al-Monitor. “It is an archaeological treasure.”

Tourism insiders are upbeat about the discovery and said that it will have an outstanding impact on the nation’s tourism industry.

Egypt is also working hard for the return of some of its treasures that have been smuggled abroad.

Hossam Akawy, head of the General Coalition for Tourism Professionals, said that the discovery will have an immediate positive effect on the tourism sector in Luxor. He told Al-Monitor, “An international spotlight on these kinds of discoveries would definitely attract tourists, especially those interested in cultural tourism.”

Egypt’s tourism sector, one of the vital engines of the economy, has shown signs of recovery since its dramatic decline following the January 25 Revolution and the crash of a chartered Russian airplane in the Sinai Peninsula in October 2015.

According the Central Bank of Egypt, tourism revenues increased considerably to $12.570 billion in 2018/2019, up from $9.804 billion in 2017/18. During the second half of the last fiscal year, the tourism sector has achieved a surplus of $1.7 billion, reducing the deficit Egypt incurred during the first half of the year.

“These archaeological discoveries are one of the top reasons behind the recent increase in tourism revenues,” Adel Nagi, a member of the General Assembly of Tourism Chambers, told Al-Monitor. Nagi also praised the decision to display the newly discovered tombs at the Grand Egyptian Museum, saying that they will be a great addition to the museum.