Though its financial resources are limited, Egypt's Ministry of Antiquities is working to finally document the countless antiquities stored for decades in warehouses across the country. 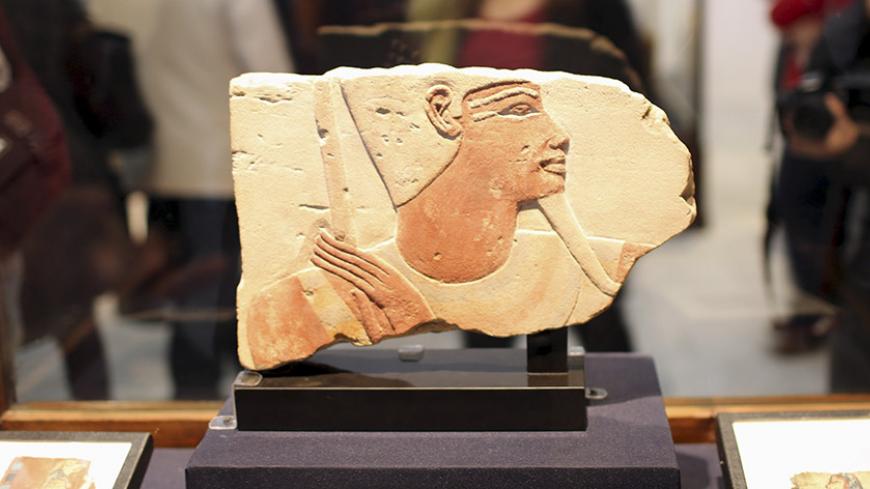 A fragment of an ancient Egyptian artifact is displayed at the opening of the Repatriated Objects exhibition at the Egyptian Museum in Cairo, Egypt, Jan. 14, 2016. - REUTERS/Asmaa Waguih

CAIRO — On July 2, Gharib Sunbul, head of the Egyptian Ministry of Antiquities' central administration for maintenance and restoration, announced that a massive inventory of 5,000 artifacts would soon be completed at Alexandria's seaside warehouses. He said that a team of specialists are studying, documenting and carefully repackaging the items as well as planning for any needed restoration.

The plan is part of the campaign announced by the ministry June 23 to document and protect the artifacts found in its archeological warehouses and to protect Egypt’s archaeological treasures against theft.

Mustafa Amin, the secretary-general of the ministry’s Supreme Council of Antiquities, told the local Al-Ahram newspaper Jan. 18 that there are 72 archaeological warehouses in Egypt. Of them, 35 are museum warehouses, 20 are expedition warehouses and 17 are smaller on-site warehouses spread across Egypt’s governorates. Only 14 warehouses out of 72 have ever been inspected.

The ministry’s inspections include creating an inventory of all the artifacts in these warehouses, in order to facilitate the recovery process in case of theft.

The treasures found in these archaeological warehouses were excavated by Egyptian scientists several decades ago. Scientists put the artifacts in the warehouses, where they have waited to be registered and restored. Only a fraction of Egypt's antiquities have made it into museums.

Monica Hanna, the head of the archeology and cultural heritage department at the Arab Academy for Science, Technology and Maritime Transport in Aswan, told Al-Monitor that the warehouses hold hundreds of thousands of artifacts about which nothing is known. Visitors are not allowed access to them.

She said, "The artifacts contained in these warehouses far outnumber those found in museums, but they are neglected and often get stolen under the ministry’s neglect."

The warehouses were established by the ministry of antiquities, which assigns a guard to protect them. However, the guards are unarmed and often unable to prevent theft.

Ahmad Jaber, the director of the Mit Rahina archeological area in Giza governorate, said on Sept. 12, 2013, that the Mit Rahina warehouse had been broken into and 238 items were stolen from it.

This has been followed by additional thefts in recent years.

On Dec. 31, 2013, the ministry announced the disappearance of 96 small and rare antiquities, dating back to the Pharaonic, Greek and Roman eras, from an archaeological warehouse in Aswan governorate.

On May 27, 2015, Ali Ahmad, the director of the Antiquities Department at the ministry, announced the existence of three fake lanterns in the National Museum of Civilization, located in Old Cairo, amid reports that the original lanterns were smuggled into the United Arab Emirates.

Later that same year, on Dec. 23, 2015, Egyptian authorities detained an archeological inspector after nine antiquities belonging to the Pharaonic era disappeared from the Tell El-Farain warehouses in the village of Buto.

On Feb. 11, 2016, 157 artifacts from the Saqqara area in ​​Giza governorate were reported stolen. And on April 30, 2016, the Mit Rahina warehouse was once again broken into, and the Egyptian authorities prosecuted the security guard for smuggling a limestone statue from the Middle Kingdom abroad and replacing it with a fake one.

Hanna said of the recent inventory efforts, “This is a good step toward salvaging Egypt's archaeological treasures. … But this campaign can only succeed if all obstacles are addressed. This requires making archaeological artifacts available to researchers and academics for scientific publication. When artifacts are documented in international libraries, their recovery becomes easier if stolen.”

The third and most important step is for the ministry to change the security system in place. It is unreasonable for the ministry to rely on two security personnel for every archaeological store without any weapons or security resources to deal with criminals. Modern surveillance cameras are needed to monitor robbery attempts. Without these steps, Egyptian antiquities will remain neglected and no attempts to protect them will succeed."

Said Hilmi, the head of the Islamic and Coptic Archeology Department at the ministry of antiquities, told Al-Monitor, “Khaled Al-Anani, the antiquities minister, ordered the establishment of a committee to inventory antiquities in the official records of the Ministry of Antiquities and preparing a database. The inventory will be completed in the near future as part of [Anani’s] campaign to protect the artifacts found in museum warehouses. This step is the first of its kind in decades.”

Sunbul said in a June 23 press statement that since the ministry started work in Saqqara, three statues as well as decorative wooden coffins that were cracked and missing parts have been restored.

Hilmi said, “We recognize that there are some Egyptian monuments in the archaeological warehouses that are subject to theft from time to time, and we also recognize that the security system on which the ministry depends needs reconsideration, especially in light of the developments that followed the January 25 Revolution and as thieves are using more advanced weapons and equipment to loot sites. But we at the ministry are now preparing a plan to increase the ministry’s security personnel in the framework of this campaign.”

He added, “Providing archaeological stores with surveillance cameras is paramount. But this requires large funds at a time when the ministry’s financial resources are very weak amid a decline in tourism activity and difficult economic conditions.”