In Israel, Palestine, Egypt and Tunisia protesters take up calls for reform in solidarity with Black Lives Matter. 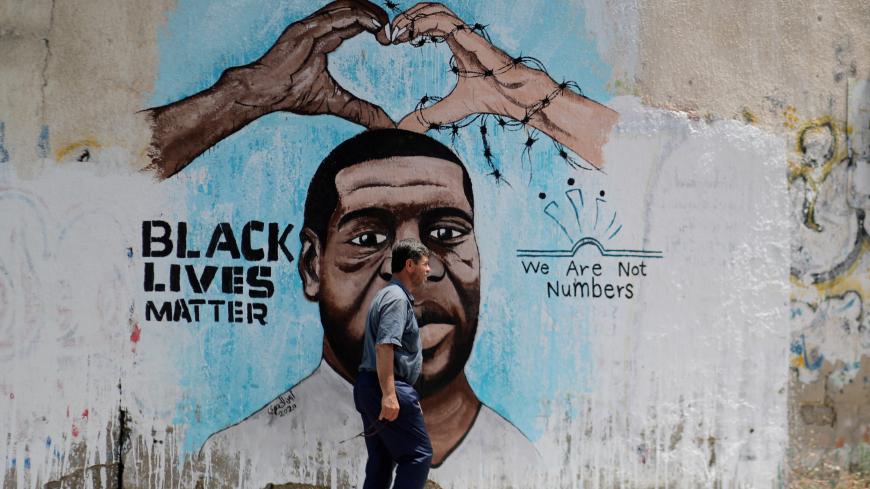 A Palestinian man walks past a mural depicting George Floyd, who died in Minneapolis police custody, in Gaza City, June 18, 2020.

The protests in the United States in response to the May 25 killing of George Floyd by a Minneapolis police officer are making waves across the world. The Middle East is no exception.

Here are four examples — in Israel, Palestine, Tunisia, and Egypt — of how the protests are playing out in the regional context:

The killing of George Floyd sparked memories of the police shooting last year of Solomon Tekah, an 18-year-old Israeli of Ethiopian origin. The riots following Tekah’s funeral were among the most violent ever observed in Israel.

As Mazal Mualem wrote at the time, the protests gave “voice to a growing sense of distrust among weaker sectors of the population for the various law enforcement agencies, chief among them the police and the Department of Internal Investigations. For the Ethiopian community, these two bodies represent the institutionalized racism they face because of the color of their skin, more than anyone else.”

This month, the incoming deputy minister of public security, Gadi Yevarkan, a member of the Likud party and a child of Ethiopian immigrants, has proposed legislation to dismantle the Internal Affairs department and place it under the Justice Ministry.

His ally in the fight is Pnina Tamano-Shata, the first Israeli of Ethiopian origin to serve in the Knesset (parliament) and the minister of immigrant absorption.

“The very fact that Yevarkan and Tamano-Shata were appointed to senior positions in government is especially important to the fight against institutional racism,” Danny Zaken writes. “Their test will be whether they succeed in bringing about real change in the coming years.”

Palestinian feminists and Israeli and Palestinian activists organized protests across the West Bank and in Israeli cities to protest the shooting of Eyad Hallaq, an autistic Palestinian, at the entrance of Al-Aqsa Mosque, five days after Floyd’s murder.

Signs and chants of “Palestinian lives matter” and “I can’t breathe” have become mainstays of the demonstrations.

“Activists presented the case of Hallaq as a clear example of the racist practices against them and the oppression they face only because they are Palestinians, comparing their situation to that of African Americans in the United States,” reports Aziza Nofal from Ramallah, speaking with activists involved in the protests.

Although Israeli Defense Minister Benny Gantz promised an investigation into the killing, “International and Israeli human rights organizations have come to the conclusion that Israeli investigations of killings of unarmed Palestinians are not taken seriously,” writes Daoud Kuttab.

Although Tunisia was only the second African country, after South Africa, to criminalize racial discrimination, racism is still pervasive, writes Hanan Jebli.

Darker-skinned Tunisians find themselves being excluded from elite society and cultural events, discriminated against when renting property, called hurtful names and denied service by cabbies and store owners because of skin color.

“Another flagrant aspect of racism in Tunisia is the allocation of separate buses to transport black people in the Kasba area and Sidi Makhlouf from the southern governorate of Medenine in order to avoid the daily quarrels and differences between black and white people there,” writes Jebli. “Discrimination does not end there, as separate cemeteries are allocated to black people on the southern Tunisian island of Djerba, located on neglected land and known as the slave cemetery.”

Tunisia was one of the first countries to abolish slavery (in 1846, before France in 1848 and the United States in 1865). The country also benefits from a thriving civil society and activism that is pressing the case for changed attitudes at the social and educational levels.

Calls for removing offensive statues and monuments with perceived racist overtones have played out differently in two cases involving Egypt.

In the first case, a sculpture in Paris of Jean Francois Champollion, the French archaeologist known for his groundbreaking work on hieroglyphics, including deciphering of the Rosetta Stone, has been deemed racist by Egyptian activists because Champollion’s left shoe is on a Pharaonic king’s head, as Salwa Samir reports.

A shoe on the face or head is considered an extreme insult in Islamic culture.

The sculptor, it turns out, is Frederic Auguste Bartholdi, the creator of the Statue of Liberty.

Despite the hope among some Egyptians that the "tear down the monuments" movement might give renewed attention to concerns over the statue, the effort has so far gotten little traction outside of a small activist circle in Egypt. And no traction at all, it seems, in Paris. For its part, France isn’t budging on any of its statues.

French President Emmanuel Macron said June 14 that France “will forget none of its artworks, it won’t take down statues."

In the second case, an alleged call for the pyramids to be dismantled created a mild Ttwitter dust-up, but the call appears to have been based on exaggeration and misinformation.

But as this was Egypt, and the pyramids, it didn’t end there.

Egyptologists and archaeologists took the opportunity to remind those concerned that the pyramids were built by conscripted laborers, not slaves.

And the campaign may have oddly worked to the advantage of the Egyptian government.

Shahira Amin reports that the controversy reminded people of remarks by the largely forgotten Salafi radical cleric Sheikh Morgan Al Gohary, who in November 2012 called for the destruction of the pyramids and the Sphinx because God demanded elimination of idols. Gohary was reportedly known to brag about what a jolly time he had as a guest of the Taliban during the demolition of the Bamiyan Buddhas in Afghanistan in 2001. Gohary’s remarks spooked those who worried about empowerment of the Muslim Brotherhood and other Islamist groups and figures during the presidency of Mohammed Morsi.

The contretemps could actually bolster Egyptian tourism, Amin reports, by reminding people of the wonders and beauty of the pyramids and antiquities. Egyptian Nile cruises were early incubators and spreaders of coronavirus. The tourism industry needs a comeback for Egypt’s economy to recoup from the losses it suffered during the pandemic lockdowns.