A group of scientists has reconstructed 8,000 years of the history of the river in the Giza floodplain to better understand how it was used to erect the iconic Pharaonic structures. 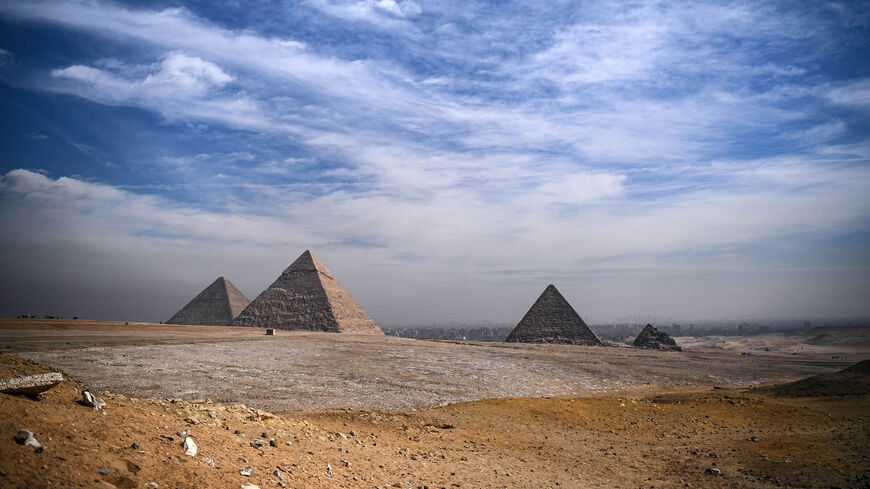 This picture shows the pyramids of Khufu (Cheops) (L), Khafre (Chephren) (C) and Menkaure (Menkheres), at the Giza pyramids necropolis on the southwestern outskirts of Cairo, Egypt, Jan. 26, 2021. - Anne-Christine Poujoulat/AFP via Getty Images

The pyramids of Giza, erected some 4,500 years ago, represent one of the greatest feats in the history of engineering, and their construction has long raised a mix of interest, fascination and disbelief. Today, it is widely accepted that ancient Egyptians exploited an ancient branch of the Nile that flowed near the Giza plateau to transport the materials they needed to build the three structures. But the evolution of that landscape that facilitated the construction of one of the wonders of the ancient world has largely remained a mystery.

To help fill this gap, a group of scientists has reconstructed, based on new sediment analysis from the site, 8,000 years of fluvial history of the Nile. They have been able to show that the river’s now-vanished branch, which they named after Pharaoh Khufu, and its water levels at the time the pyramids were built were key to their construction.

“Our 8,000-year reconstruction of Khufu-branch levels improves our understanding of fluvial landscapes at the time of the construction of the Giza pyramids complex, and demonstrates that Old Kingdom engineers harnessed the fluvial environment — the Nile and its annual flood — to exploit the plateau overlooking the floodplain for monumental construction,” said Hader Sheisha, environmental geographer at Aix-Marseille University in France and one of the study’s lead authors.

The study led by Sheisha notes that today there is broad consensus that ancient Egyptians took advantage of the Khufu branch and the Nile’s annual floods to develop a system of canals, basins and a port at the foot of the Giza plateau. And it was largely thanks to this water transport infrastructure, about which relatively little is still known, that they were able to build colossal structures such as the pyramids of Menkaure, Khafre and Khufu.

Recent archaeological findings and modern subterranean engineering works in the area support the existence of these canals and the harbor. And a set of papyri found in 2013 at a Khufu-age port in the Red Sea yielded new evidence consistent with this landscape and infrastructure, as they describe a port at the foot of the Giza plateau and chronicle the transport of material used to erect the pyramids.

“The amazing thing about the papyri is that the longest pieces were a notebook, a diary, of a man named Merer who was in charge of a team that brought stone from the quarries of Tura to build the Great Pyramid of Khufu,” Mark Lehner, an American archaeologist who has been trying for more than 30 years to reconstruct the Dynasty IV floodplain and water transport infrastructure in Giza, told Al-Monitor.

To further prove the existence of the Khufu branch of the Nile and estimate historical variations in its water levels, the team led by Sheisha extracted sediments from two cores about 15 meters (49 feet) deep drilled in the present Giza floodplain, east of the pyramids, where the Khufu branch is believed to have once flowed. The researchers then meticulously analyzed the material in search of tiny pollen grains, buried for millennia in the area, that could give them clues about the natural evolution of the landscape.

In total, they detected 61 plant species, which they grouped into seven vegetation patterns based on ecological affinities. Among them, the team identified a family of plants commonly found on the banks of the Nile, tropical Nilotic species carried downstream by the river from tropical areas and plants typically located in marshy ground. From here, the researchers determined the water levels of the Khufu branch based on the abundance of pollen from those plant species compared to that of terrestrial species they also found.

“Upland terrestrial herbs, date palm-willow, cereals and ferns correspond to a more terrestrial influence, so their higher representation could indicate the expansion of the desert. And that simply means a decline of the Khufu branch,” Sheisha told Al-Monitor.

From these analyses, the researchers determined that the highest water levels in the Khufu branch occurred at the beginning of its 8,000-year record, coinciding with the African Humid Period, a time when North Africa and much of present-day Sahara were much wetter than today. Then, from about 3550 B.C. onward, Giza’s waterscapes entered a process of gradual aridification. But at the time the pyramids were built, the levels of the Khufu branch were still suitable to facilitate their construction, the study claims. Water levels would then continue to drop until reaching extremely low limits by the beginning of the Ptolemaic Period in 323 B.C.

“We show that during the first half of the Old Kingdom of Egypt (2686–2440 B.C.), the level of the Khufu branch remained relatively constant, characterized by a level at around 40% of that reached during the African Humid Period. From the Third to the Fifth dynasties, the Khufu branch clearly offered an environment conducive to the emergence and development of the pyramid construction site,” Sheisha noted.

The findings support the fluvial-port-complex hypothesis about the construction of the pyramids. “This hypothesis postulates that pyramid builders cut through the western levee of the Khufu branch and dredged basins down to river depth in order to harness the annual 7-meter [23-meter] rise of the flood like a hydraulic lift, bringing the higher water levels to the base of the Giza plateau. Our study reveals that this is possible,” Sheisha added.

Although the study supports his fluvial-port-complex hypothesis and the analyses were carried out based on a model he designed, Lehner shows reservations about the results achieved so far, especially because he believes that more drillings need to be done in the area and some technical details need to be refined to reach more robust conclusions.

Christophe Morhange, geomorphologist at Aix-Marseille Universty and one of the authors of the study, considers that their analyses are very new and is confident they will gradually give a better picture of that episode in history. “The interdisciplinary approach or geoarchaeology is quite new in Egypt. Our main goal is to test Mark Lehner's paleogeographic hypothesis of the presence of a canal harbor below the pyramids. And step by step, we are confirming his hypothesis,” he told Al-Monitor. “Soon we will work and publish on the pollution connected to the construction of the pyramids."