When will Egypt open its Grand Museum?

The Grand Egyptian Museum, expected to be the world's largest archaeological museum, will have its great opening early 2020. 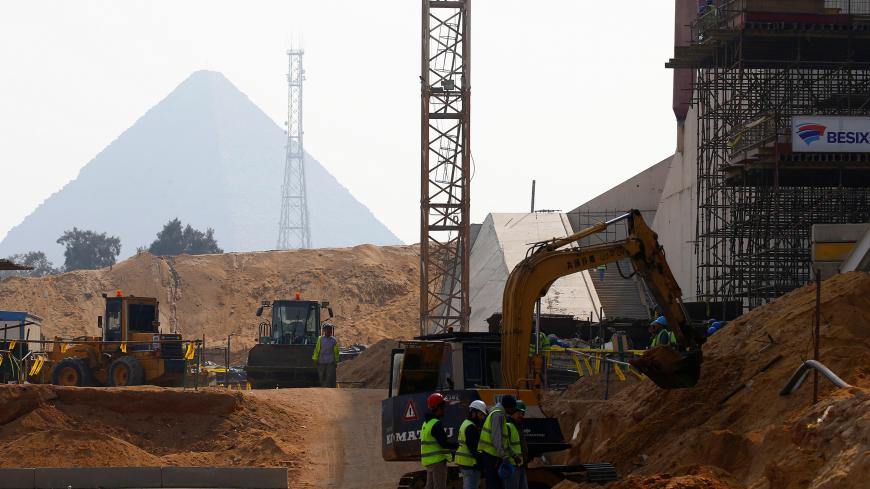 A view of the site of the Grand Egyptian Museum, which is under construction, is seen near the Giza Pyramids on the outskirts of Cairo, Egypt, Jan. 30, 2018. - REUTERS/Amr Abdallah Dalsh

Egypt's wealth of historical monuments and temples, popular Red Sea diving spots and pristine beaches on the shores of the Mediterranean have always been a magnet for tourists, deservingly earning the North African country its reputation as a must-visit destination. But the years of political upheavals and economic instability that followed the January 25, 2011, mass uprising in the country have taken their toll on the tourism sector, which has only recently begun to show signs of recovery.

As part of its plan to revive tourism, the government has adopted a “Build it and they will come” strategy in the hope that the country's unrivaled tourist attractions — including a new mega museum, which is expected to be the world's largest archaeological museum — will lure back foreign visitors.

Egypt's tourism sector had been on a rebound when a bus struck a roadside bomb Dec. 28 carrying Vietnamese tourists less than 4 kilometers (2.5 miles) from the Giza Pyramids. Three Vietnamese tourists and their Egyptian tour guide were killed and at least 10 others were injured in the deadly attack, the first such assault on foreign tourists in Egypt in over a year. The impact of the latest blow to the country's tourism sector is still unclear, but Egypt's tourism industry has in the past proved to be resilient in the face of terrorist attacks and other calamities. The sector has been dealt a series of harsh blows including the February 2016 downing of a Russian airliner over the Sinai Peninsula and attacks on Coptic churches, but in 2017 — after seven lean years — tourism managed to bounce back.

According to figures published by the United Nations World Tourism Organization in its 2018 tourism report, Egypt witnessed a 55.1% increase in tourists to 8.6 million visitors in 2017 compared to the previous year, earning the country its ranking as "the world's fastest-growing tourist destination." The upward curve in tourism continued last year when more than 712,000 tourists visited the country in January 2018, Egypt Today reported, citing figures from Trading Economics, an online statistics site. The turnaround was attributed to improved security and a fall in prices, according to an article published in the Financial Times in May 2018. The November 2016 flotation of the Egyptian currency that led the Egyptian pound to lose almost half of its value against the dollar has meant cheaper holidays for travelers to Egypt.

The development of the Giza Plateau, which houses the Great Pyramids and the Sphinx, is at the heart of the government's plan to boost tourism in the area, a major tourist attraction listed as a UNESCO World Heritage site.

The Grand Egyptian Museum (GEM), currently under construction in the vicinity of Egypt's most famous monuments, is due to be opened next year. Early last year, antiquities officials had announced that the museum complex would be partially opened in the first quarter of this year, but the government has rescinded its decision in favor of a grand opening of the project in 2020 instead.

"The museum's opening has been postponed," Tarek Tawfik, GEM's director, told Al-Monitor. "We thought it best to delay the opening until the new Sphinx International Airport a half an hour's drive away from GEM is up and running. Tourists arriving at the new airport will be able to visit both the museum and the Pyramids, which are located in the same district," Tawfik said.

He hopes the new airport's proximity to GEM and the Giza Plateau will encourage weekend tourism to Cairo, allowing businesspersons and other travelers making lightning visits to Cairo to see the city's major attractions during their short stay.

Located on a hill of sand on the Cairo-Alexandria Highway less than 3 kilometers (2 miles) from the Giza Pyramids, the museum complex extends over a vast area of nearly 500,000 square meters.

"The museum has deliberately been positioned on an elevated height to allow visitors touring its galleries to see the Pyramids through the glass facades," Tawfik said.

In the preparation phase, the museum's construction site was combed by archaeologists to ensure that there were no artifacts beneath the desert sand, Tawfik added.

The idea for the new museum dates back to 2000 when the then-political leadership in Cairo decided that a bigger museum was needed to showcase the country's numerous precious artifacts spanning different dynasties of ancient Egypt. The old Egyptian Museum in Tahrir Square was too crammed with ancient relics and was often criticized as resembling a storeroom. Moreover, conditions for the preservation of the artifacts in the 11-year-old museum in Tahrir Square were far from perfect: Many priceless objets d'art had suffered damage as a result of their exposure to humidity and light for many years.

"To date, some 43,000 artifacts have been transferred to the new museum from the Egyptian Museum and storage facilities across the country, the bulk of which have undergone restoration by our team of Egyptian conservators in a manner that is reversible," Tawfik said. He added that they wanted to make sure that the methods they use are reversible because new technologies and methods of conservation may emerge in the future.

The $1 billion project has been mostly financed by Japan International Cooperation Agency, which has granted Egypt two loans amounting to a total of US$780 million. It includes massive galleries extending over 50,000 square meters of covered exhibition space and 40,000 square meters of open exhibition space, in addition to a conference center that can accommodate up to 1,000 guests, a modern theater with 500 seats, shops, restaurants and surrounding gardens.

The collection of Pharaoh King Tutankhamen — whose reign lasted from around 1332 to 1323 B.C. — is certain to be the star attraction when GEM opens next year. Some 5,400 objects from the nearly intact tomb of the 18th-dynasty boy king, discovered by British archaeologist Howard Carter nearly a century ago, will be showcased at the museum, many of them to be seen by visitors for the first time. Only a third of these artifacts had been on display at the Luxor Museum and the Egyptian Museum in Tahrir Square.

A 7,000-square-meter space has been allocated to King Tut's belongings, which include six of his gold-gilded chariots. The sixth and last of the chariots was paraded through the streets of Cairo amid much fanfare in May 2017 while being transported to GEM from the Egyptian National Military Museum. Conservators are hard at work in a lab at the new museum reconstructing the ancient chariot, which was once used for hunting and warfare or in processions. Well-preserved leather harnesses, gauntlets and a bow case — believed to be the chariot's trappings — were rediscovered in a storeroom at the Egyptian Museum in Tahrir Square in November 2011 and are being used to restore the ceremonial carriage to its original state.

A 30-foot-tall statue of King Ramses II, widely considered to be the most powerful pharaoh of ancient Egypt, stands guard outside the museum. The 3,200-year-old statue was transported to its new home last January in a lavish ceremony witnessed by proud officials and the media.

Tawfik hopes that once complete, the Grand Museum will not only boost tourism to the country and restore the sector to its pre-revolution levels, but that it will also rekindle Egyptians' pride and interest in their cultural heritage. "This cultural institution will not only draw more visitors to the country; it is also for the Egyptian people to be better informed about their cultural roots and history," he said.

Downplaying the recent attack on the tour bus in Giza, he said, "Such incidents will not deter the tourists from coming. They can happen practically anywhere, and tourists worldwide are adapting to the new conditions."