Egypt has repeatedly tried to retrieve Nefertiti’s bust from Germany, which Cairo claims was illegally smuggled out of the country when it was discovered more than 100 years ago. 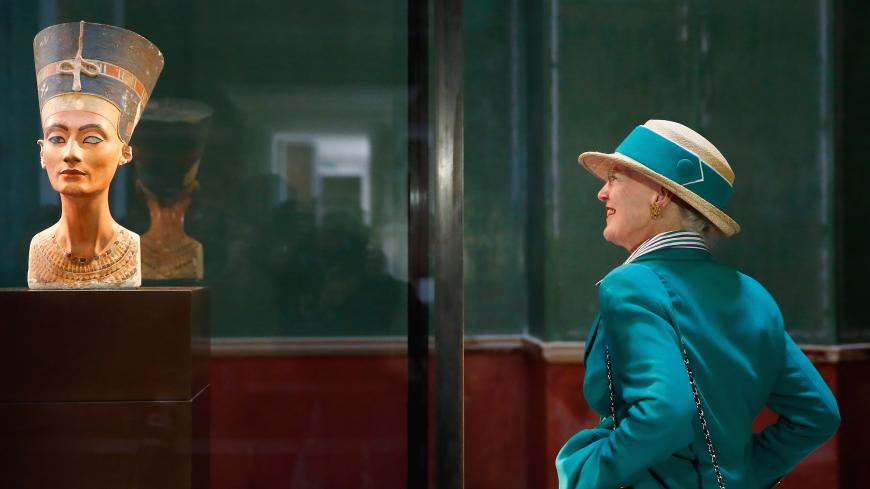 CAIRO — The Egyptian government is trying to reclaim the bust of Queen Nefertiti from Germany, but the latter is refusing calls for returning the Pharaoh statue to Cairo. Meanwhile, Egypt has emphasized that it is taking all necessary measures to restitute Egyptian antiquities that were smuggled out of the country illegally, including Nefertiti’s bust.

German archaeologist Ludwig Borchardt and his team had discovered the Nefertiti bust on Dec. 6, 1912, in what had been the workshop of sculptor Thutmose in Amarna in Minya governorate. Borchardt took the statue out of Egypt in 1913, in breach of the rules on the division of architectural finds at the time.

Back then, the division rules stated that exceptional antiquities discovered by foreign excavation teams would be handed over to Egypt, while the remaining artifacts would be distributed among the party that discovered them and the Egyptian Museum in Cairo.

Germany claim that the division of architectural finds in Amarna was legal and that Nefertiti’s statue was Berlin’s share, as per the German Deutsche Welle website. Egypt accuses Borchardt of wrapping the bust to conceal its value and smuggling it out of the country.

Egypt has been demanding the restitution of Nefertiti’s bust for decades. But all Egyptian attempts failed. In 1933, Hitler refused to return the statue to Egypt and wanted it to be displayed in the museum of the capital Germania that was to be established. In April 1946, King Farouk I, then-king of Egypt and Sudan, sent out an official memorandum to the Allied Control Council in Germany calling for the return of the statue.

In 2011, Zahi Hawass, then-secretary-general of the Supreme Council of Antiquities, sent out an official letter to the German government, the relevant authorities and the German ambassador to Egypt, including a request to return the head of Nefertiti to Egypt.

During a visit to Germany on Sept. 18, Egypt’s Minister of Tourism and Antiquities Khaled al-Anani reiterated his country’s claim for Nefertiti’s bust. In TV statements Sept. 19, Anani said he had asked the German authorities to return Nefertiti’s bust, but they insisted on keeping it since it is a unique piece in the art of sculpture.

He noted that Germany handed him five antiques to return to Egypt. He underlined that Egypt has continued to negotiate and take all necessary measures to reclaim the pieces that were illegally taken out of Egypt, including Nefertiti’s bust, which was taken from Egypt 107 years ago in a controversial way.

Gobtsel said in press statements Sept. 21, “Cairo did not submit any official request to restitute the bust of Nefertiti for long years.” She noted, however, that Germany is always open to negotiations with Egypt.

Statements by German officials in the past reflect Germany’s insistence on keeping Nefertiti’s bust rather than returning it to Cairo. German Ambassador to Egypt Julius Georg Luy said in a press statement after meeting with former Egyptian Minister of Tourism Yehya Rashed in February 2017 that the minister could not convince him with his point of view in regard to the return of Nefertiti’s bust. He added, “Nefertiti’s bust is widely popular in Germany.”

While Germany holds on to Nefertiti’s bust, archaeological experts and officials believe the statue is an Egyptian right and must be returned. They stress that the Egyptian government will continue to take appropriate measures and be patient in its negotiations with Berlin. There is also a proposition to turn the case into a popular campaign, by launching petitions for example, to avoid embarrassing the Egyptian government.

Mamdouh el-Damati, former Egyptian minister of antiquities, believes that Nefertiti’s bust has huge historical value. He noted that the authorities have been negotiating with the Germans since 1922, through 1933 in the days of King Fouad and then in 1945 during the rule of King Farouk.

He noted that Germany’s pretext is that the statue is its right, as per the legal division that happened after the official excavations. Meanwhile, Egypt states that the division process was fraudulent and deceitful. Damati believes that the prolonged negotiations will finally tip the balance in favor of the holder of the stronger argument.

He said that Egypt will continue its negotiations and calls for returning the statue from Berlin, and that UNESCO’s 1970 Convention on the Means of Prohibiting and Preventing the Illicit Import, Export and Transfer of Ownership of Cultural Property plays no role in the fate of the statue. The convention has been in force since 1971 and does not have a retrospective effect.

Shaaban Abdel-Gawad, head of the Department of Repatriated Objects at the Ministry of Antiquities, confirmed Cairo's ongoing negotiations with Berlin, stressing that Egypt would not cede its right to reclaim Nefertiti's bust.

He told Al-Monitor that these negotiations will take time, and no date can be set for them to be resolved.

Hawass confirmed that Egypt was able to prove that the bust of Queen Nefertiti left Egypt illegally and that it was stolen. Therefore, it must be returned. In TV statements on Sept. 22, Hawass accused Borchardt of stealing Nefertiti's head by passing it off as a less significant discovery, smuggling it to Germany and leaving it out of the division process.

Hawass added in his statements that he is collecting signatures from Egyptian and foreign intellectuals to return Nefertiti's bust to Egypt because it was smuggled illegally, to avoid embarrassing the Egyptian government and to make the return of Nefertiti's bust to Cairo a popular demand.