Egyptians have taken to social media to criticize and ridicule a number of newly erected public monuments, which they say are not up to professional artistic levels and disgrace the country’s prestigious history. 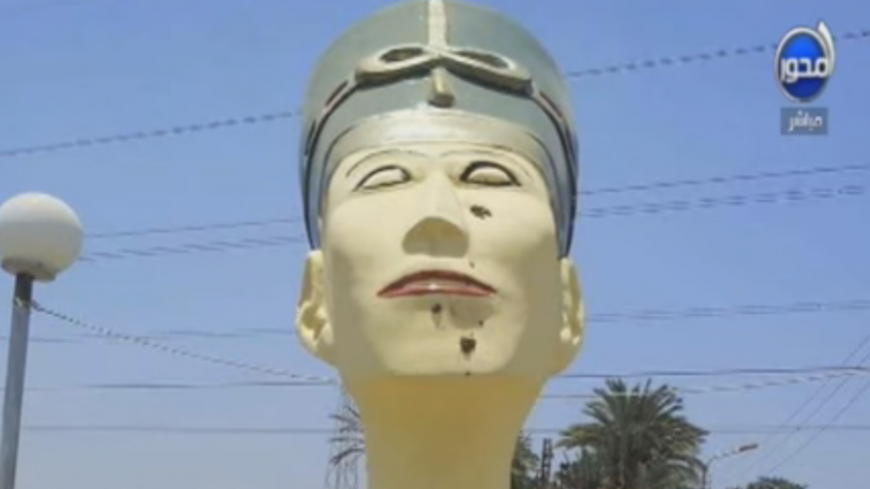 A statue of Queen Nefertiti erected in a public square in Minya in 2015. It was subsequently removed after locals criticized it for not accurately depicting the queen. - YOUTUBE/Mehwar TV Channel

CAIRO — Facebook users have been sharing photos of statues erected during 2015 in public squares throughout Egypt. These monuments, however, stirred a wave of anger and mockery among citizens for their artistic level and for not resembling the person they are meant to embody.

These feelings of anger and mockery were particularly evident among the local communities that live in areas surrounding these squares. The inhabitants of the city of Safaga in the Red Sea governorate were hit with a surprise during the unveiling of the Arousa Square monument on Nov. 28. According to some locals, the statue looks nothing like a mermaid as intended, but rather resembles a nightclub dancer. The same thing happened with the inhabitants of Aswan governorate who were horrified by a hideous statue of the great Egyptian writer Abbas El Akkad erected in the Akkad neighborhood of Aswan in early November. As part of a larger development plan for the neighborhood, a public official in the local administration unit restored an original statue initially made by the late Egyptian sculptor Farouk Ibrahim, but following restoration the statue no longer resembled the Egyptian literary giant. Samalout city in the governorate of Minya removed a statue of the pharaonic Queen Nefertiti in July 2015 after a campaign launched by social media activists criticizing the ugliness of this statue that looks nothing like the queen.

On this subject, Mustafa Abdel Muti, the undersecretary of the Ministry of Culture and former president of the Academy of Arts, told Al-Monitor, “The statues in public squares have special characteristics related to the general culture of the people. A certain statue may be a prominent piece of art but belong in a museum and cannot be displayed in public squares as it may violate public decency.”

He added, “A statue aims to perpetuate the memory of a person or specific event and every statue has its own technical specifications and measurements that are integrated with each other. When choosing a statue to be erected in a public square, the urban space must be taken into account, including the adjacent area and the height of surrounding buildings and trees. The materials chosen must also be taken into consideration, including stone or bronze or iron, and must be in harmony with the nature and design of the buildings around the statue.”

Abdel Muti pointed out that mounting artistic statues in Egyptian public squares is an action subject to the approval of the local governor and not submitted to any technical committee of specialists.

“Strangely, when the local administration units’ officials conclude a contract for placing a specific statue in a public square, they use the contracting method. The officials commission a contractor who will be responsible for the development of the square and will ask him to put up the statue at the lowest cost and within the fastest time limit without any agreement on any technical specifications. Thus contractors then resort to amateur sculptors, despite the availability of professional sculptors,” he added.

He indicated that the real problem is not limited to the distortion of public squares but rather extends to the falsification of history. “If these works of arts remain standing for long periods of time they will eventually be viewed as antiquities. Future generations will surely curse us for the legacy of shame we left them. Egypt was the first master of the art of sculpture but [with these new statues] may turn into a mockery for the world.”

He also called for separating politics from art and stressed that the role of the governor must be limited to granting licenses for setting up statues in public squares. “A commission formed by the Ministry of Culture and the National Organization for Urban Harmony must organize a competition between artists for choosing the best artistic statue. The winning piece should then be erected in the square,” he said.

He noted that no artistic officials are employed by the local administration units as is the case in many countries of the world such as Italy, where a doctor’s office sign or a shop sign — or even a front window — must be subject to the approval of a municipality so as not to distort the image of the streets and squares.

The former head of the local council of Port Said governorate, Mahmoud al-Miniawy, told Al-Monitor, “We must admit our mistakes in order to build the future and indeed the lack of art specialists in local units undermines the reputation of Egypt’s civilization.”

Miniawy called on the minister of local development, Ahmed Zaki Badr, to include an article in the new municipal law — which will be up for discussion and ratification in the new parliament — specifying that the Ministry of Culture represented by the National Organization for Urban Harmony shall oversee the selection of artistic works in public squares.

Miniawy blamed the local government units for not resorting to senior Egyptian sculptors to cast such statues and rather choosing amateurs. “Prominent sculptures might even produce these works for free if the local units provided them with the raw materials. These artists know that they would be leaving priceless historical works in the squares,” he said.

He explained that the biggest disaster is not only that the local government units are hiring contractors to do works of art, but also some local inhabitants and companies are submitting requests for the development of a given square at their own expense, provided the company name or the family name is placed on the statue and that the company or family choose the shape of the statue.

Sayyed Madbouly Ali, the head of the Department of Architecture at the Faculty of Engineering at Ain Shams University and a member of the National Organization for Urban Harmony, told Al-Monitor, “The National Organization for Urban Harmony is powerless. Since its inception in 2001, its role has been limited to printing guidelines describing the principles and criteria of urban harmony. These guidelines are disregarded by the local units and there is nothing in the law governing the establishment of the organization that allows imposing sanctions on the local units for violating the organization’s instructions.”

The squares in the cities embody the history of peoples and culture and express the nation's memory, including its events, culture and arts. The current statues mounted in Egypt squares insult Egypt's long and renowned artistic history.