Egyptian and international experts and activists worry that moving four ram-headed sphinxes from Luxor to Tahrir Square will destroy the monuments. 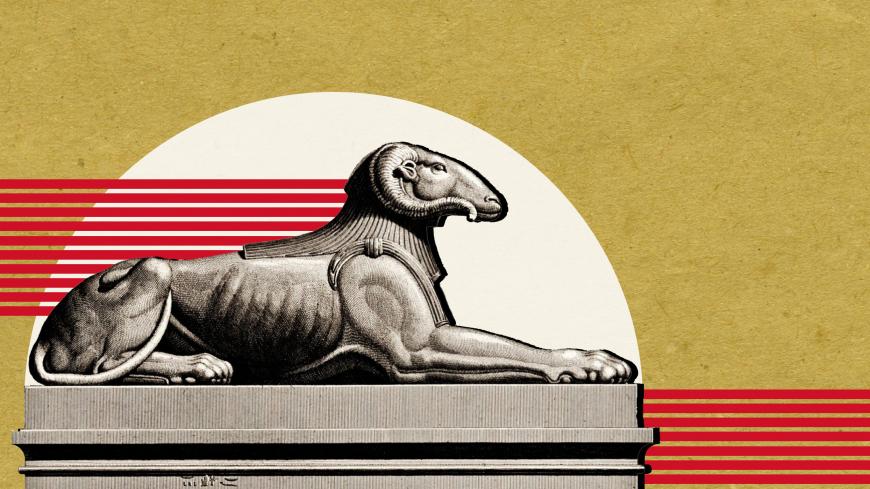 The decision by the Egyptian government to move four large pharaonic sculptures from Luxor, in Upper Egypt, to iconic Tahrir Square, in downtown Cairo, has sparked controversy. During a Dec. 26 visit to redevelopment work on Tahrir, Prime Minister Mostafa Madbouli revealed the government's intention to transfer the huge sphinxes with ram heads from the Karnak Temple complex to stand alongside an obelisk from the time of King Ramses II, which is currently in the nearby Egyptian Museum off Tahrir Square.

A number of archaeologists and social media activists in Egypt and beyond expressed their objection to the move, urging the government to leave the sphinxes in Luxor and to instead install replicas in Cairo. Monica Hanna, head of the Heritage and Archeology Unit at the Arab Academy for Science and Technology in Aswan, circulated a petition to stop the transfer. Addressed to President Abdel Fattah al-Sisi, the petition garnered the signatures of 1,500 professors, archaeologists and well-known personalities, Hanna told Al-Monitor.

The petition lambasted the planned transfer as a violation of international norms regulating the preservation of monuments and historical buildings, citing Article 7 of the Venice Charter (1964), a set of international guidelines for the conservation and restoration of historic structures. The charter is non-binding but served as the basis for the UNESCO World Heritage Convention (1972), to which Egypt is a signatory. The article states that the moving of a monument or its parts cannot be allowed with the exception of efforts to safeguard it.

Hanna stands among those who believe it would be better to make copies of the rams for Tahrir Square rather than jeopardizing the original statues by moving them and also by exposing them to Cairo's air pollution, which can be particularly damaging to the statues' sandstone. The parliamentarian Haitham el-Hariri sent a memorandum to the speaker asserting that moving the statues violates international law and calling for the production of replicas.

International criticism challenging the planned transfer was swift. Shaikha Mai bint Mohammed Al Khalifa, chair of the Bahrain Authority for Culture and Antiquities and president of UNESCO's Arab Center for World Heritage, sent an official message to the Ministry of Antiquities on Jan. 2.

“Any amendment to a site of this importance must be preceded by consulting the UNESCO World Heritage Center, submitting reports that assess the impact on the site itself, and other matters stipulated in the operational guidelines of the World Heritage Convention,” she wrote, suggesting that Egyptian and international experts be allowed to study the ramifications of the move.

The Egyptian government has thus far refused to concede an inch, arguing that it is making good use of the nation's heritage by putting the statues on full public view. Mustafa Waziri, secretary-general of the Supreme Council of Antiquities, said that the sphinxes have been located behind the first edifice of the Karnak Temple complex, away from the tourist circuit known as the Road of Rams linking Luxor and the Karnak temples.

Waziri said the statues will be protected and preserved on Tahrir, with a fence surrounding them.

The redevelopment of Tahrir Square was controversial even before this latest dustup. Lobna Abdel Aziz, a professor of architecture and urban design at Minya University's Faculty of Fine Arts, posted images on Facebook that she identified as designs for the Tahrir Square development project. They show the rams and obelisk positioned at the center of the square.

“[The plan] does not take into consideration the historical importance of one of the most renowned squares in Egypt,” Abdel Aziz wrote on Facebook, calling Tahrir “the icon of the January 25 Revolution.” It was on Tahrir Square that Egyptians gathered in mass in 2011 to successfully demand that President Hosni Mubarak step down after 30 years in office.

Abdel Aziz noted that an international competition had been held for redeveloping the square some seven years ago, but that the present government had simply dismissed the project selected. Instead, she charged, it chose to embark on a new path “without a clear reason or a clear goal.”

In early 2012, the Military Transitional Council that controlled Egypt after the revolution had announced the competition to redesign the square, which had become synonymous with the event. The project submitted by Mohamed Zeinhum, a professor at Helwan University's Faculty of Applied Arts, won. His proposal called for reconstructing the square in the shape of the number 25 and envisaged public spaces for recreation and artistic performances.

Implementation of the project was shelved when the country fell into political turmoil following the election of Muslim Brotherhood leader Mohamed Morsi as president. Last August, the government announced that it would start the redevelopment of the square as part of a larger plan to develop historic Cairo.

Ali Abu Dasheesh, an archaeologist with the Zahi Hawass Center of Egyptology at the Bibliotheca Alexandrina, said that there is nothing wrong with moving the four statues to Tahrir Square if the government can guarantee their protection.

“A fence will surround the obelisk and the four statues, and there will be adequate space around them in order to prevent any human interaction with the antiquities,” Abu Dasheesh told Al-Monitor. “Also, the Egyptian Museum is located near Tahrir Square, which means that regular restoration will be carried out on the monuments.”

Abu Dasheesh believes that Tahrir should not be a site commemorating the January 25 Revolution, as previously planned, because it is a recent event. He prefers instead that the location be dedicated to the history and civilization of Egypt.

Tahrir is the largest square in Cairo. It was restructured in the 19th-century in an attempt by Ismail Pasha to model the Egyptian capital on the design of Paris. To this end, he requested that the square resemble the square around the Arc de Triomphe. The square, or “midan” in Arabic, was known as Midan Ismailiya until the 1952 revolution that overthrew the monarchy, after which it was renamed Midan Tahrir, or Liberation Square, under President Gamal Abdul Nasser.

“It happens in countries around the world that squares host the country’s monuments and famous historical objects,” Abu Dasheesh said. “That is what will happen with Egypt’s Tahrir Square as well.”