Tahrir Square has reopened after major renovations, but not everyone's a fan. 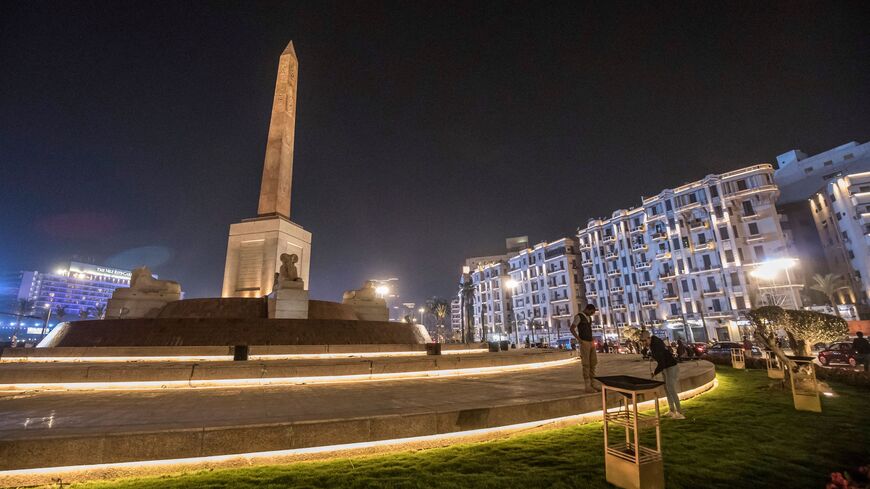 The Obelisk of Ramses II surrounded by four ancient sandstone sphinxes extracted from the Avenue of the Sphinxes in Luxor stand in the center of the main roundabout of Tahrir Square in Egypt's capital Cairo on April 3, 2021. - KHALED DESOUKI/AFP via Getty Images

CAIRO — The Egyptian government has reopened Tahrir Square, the main gathering point for demonstrators during the 2011 revolution against the late autocrat Hosni Mubarak, following months of construction.

The square was ceremonially reopened during the April 3 parade of nearly two dozen ancient royal mummies.

The 22 mummified royals, some over 3,000 years old, were carried on decorated carriages from the Egyptian Museum on the square to the National Museum of Egyptian Civilization in southern Cairo.

The museum cost the Egyptian government around $130 million to build.

The vehicles carried the ancient sovereigns slowly past Tahrir Square on the road to their new home, in an event that was closely followed by tens of millions of people inside and outside Egypt.

The upgrade of Tahrir Square started late last year to reshape an area that gained prominence as a symbol of the uprising against Mubarak.

Thousands of peaceful demonstrators gathered on the square for 18 days to pressure the late autocrat to step down after three decades in office.

The government spent close to $10 million to upgrade Tahrir Square, making radical changes to the site and its surroundings.

The square held symbolic meaning as a site of both triumphs and setbacks for the revolutionaries, many of whom are in prison now. Anger is common among those who see the iconic center of the 18-day revolution being altered. They consider the remodel an attempt by the government of current President Abdel Fattah al-Sisi to eliminate all traces of the 2011 revolution.

"This overhaul has no other objective," Sami Youssef, one of many protesters on the front line of the revolution, told Al-Monitor. "The government just wants to get rid of all traces of the revolution."

In 2011 the square buzzed with the revolutionary spirit, which manifested in the graffiti that adorned the walls of the buildings around the square. A memorial to the victims of police violence was established at the center of the square.

These and other revolutionary marks were abolished in what revolutionaries like Youssef describe as an attempt to "rewrite" history.

An obelisk dating back 3,500 years replaced the memorial. Four sphinxes with ram's heads were brought from Luxor.

Antiquities officials say the obelisk will bring the greatness and charm of the ancient Egyptian civilization to a square that has long been a centerpiece of Egyptians' lives.

The 2011 revolutionaries say, however, that the obelisk and sphinxes will become an excuse for the state to prevent future demonstrations on the square.

"These antiquities give the authorities a pretext to shut down the square in case of protests," Youssef said. "This is how they make Tahrir Square inaccessible to political activists."

The overhaul of Tahrir Square includes colorful lighting on the square itself and the buildings around it.

The government says the upgrade is part of an ambitious plan to make the center of the Egyptian capital a magnet for foreign and local tourists.

"The area has a huge number of attractions to show its visitors," Deputy Cairo Governor Ibrahim Abelhadi told Al-Monitor.

The area around the square is contains dozens of wonders including the Egyptian Museum, a 118-year-old building that contains over a 100,000 ancient artifacts. There are hundreds of ancient buildings that bear architectural influences from a wide range of European sources.

"We also wanted to preserve these buildings to protect our rich and diverse architectural heritage," Abdelhadi said.

Cairo governorate authorities have restored hundreds of downtown Cairo's buildings, bringing much of the center of the Egyptian capital back to its former glory.

Some of the buildings have been restored to how they appeared in old black-and-white movies.

The façades of the buildings were given new paint and the shops were given new signs in traditional fonts that resemble the old signage when Cairo was a gathering place for Europeans from all walks of life who met at famous cafés like Groppi and La Parisiana.

The authorities also made some of the streets of downtown Cairo off-limits for vehicles.

Those visiting the center of town can start with Tahrir Square and the Egyptian Museum just meters away and wander the streets, where diverse architectural designs and influences jockey for attention.

The upgrade also alarms some archeologists who warn of potential damage to the sphinxes and the obelisk from pollution.

"The presence of the obelisk and the sphinxes in this area will cause them major damage," independent archeologist Ziad Morsi told Al-Monitor. "The government just decided to put these antiquities on the square without consulting anybody or doing proper studies."

Antiquities officials say, however, that research was indeed done.

"The studies showed the square to be totally fit for the presence of these antiquities," Gharib Sonbol, a senior Ministry of Tourism and Antiquities official, told Al-Monitor.

"If squares are unfit for antiquities, why are there antiquities on most European squares, including ancient Egyptian obelisks?"