An uncommon Sunni practice granting immediate verbal divorce has wreaked havoc on the lives of many Kurdish-Iranian families, and some legal and religious parties argue it should be abolished. 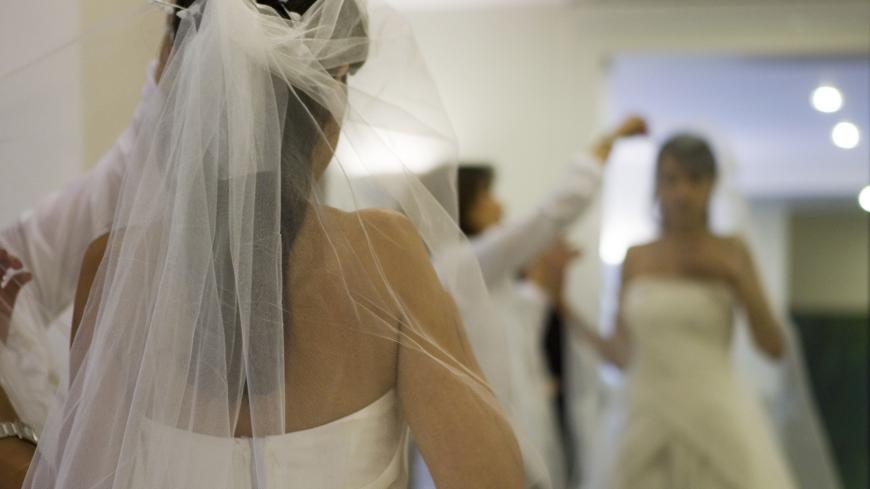 An Iranian dress designer checks the fit of a veil on a bride at a fashion studio in north Tehran, Oct. 2, 2007. - REUTERS/Caren Firouz

Rozhan thought that she was in a happy and loving marriage — until her husband divorced her through an archaic Islamic practice that she was scarcely aware of.

Rozhan, 30, lived with her husband, Shaho, 41, and their two small children in Mariwan, a border town in the Kurdish region in western Iran. Last spring, Rozhan told her husband that she was going to visit her sister who lived just a few streets away. Shaho objected, saying casually, “I triple talaq [divorce] you if you go.”

“So I declared that I divorced her three times, not fully aware that this was irreversible,” said Shaho, who told his story to Al-Monitor on condition his full name not be used.

Triple talaq, or talaq al bid’ah, is a form of divorce under Islam that enables a man to verbally end his marriage. Different Islamic traditions have different practices around this instant and irrevocable form of verbal divorce, and some scholars consider it irreconcilable with the Islamic idea of marriage. In the Kurdish region of Iran, however, it is invoked often. Once it is declared, the couple is expected to cease to live together immediately. Otherwise, they are committing “zina,” an illegitimate relationship between a man and a woman who are not married. When Shaho’s father, a conservative Shafi’i cleric, heard the story through his son, he ordered them to stop living together.

In the last Iranian year (which ended March 20), there were 175,000 divorce cases in Iran — the highest since 1965. In the Kurdistan province, Mariwan has one of the highest divorce rates.

“There is no exact data about the cases of triple talaq,” Golala Watandoost, a lawyer in the Kurdistan province who works on these cases, told Al-Monitor. “But somewhere between 55% and 60% of the divorces [in the region] are a result of triple talaq.”

In some schools of Shiite and Sunni Islam, a man can verbally divorce his wife if he declares his desire to do so on three different occasions with witnesses present. The idea is to give the man time to cool off and reconsider the decision and for the couple to reconcile. Triple talaq, which is only practiced in parts of the Sunni Islamic world, involves no waiting period.

Iran’s civil divorce laws greatly favor husbands, who have an incontestable right to divorce. Until 2002, men didn’t even need to provide a reason for divorce before the court. But despite the legal changes, the situation remains imbalanced. Men can initiate a divorce on almost any grounds, including the wife's sickness, disobedience or refusal to have sex. Women can initiate divorce on more limited grounds, such as insanity, inability to provide for the family, abuse or impotence.

“I love my wife and I want her to be with me, but I can’t go and live with her,” Shaho told Al-Monitor. “There is too much social pressure on us and we had to separate.” For the time being, Rozhan has been given custody of the younger of the two children, aged 2. The older one, 7 years old, lives with Shaho’s father.

If a divorced couple wants to remarry, the woman then must marry another man first even if it is for an hour, then ask for a divorce so that she can remarry her ex-husband. This loophole is called “nikah halala,” literarily “marriage of legitimization.”

Some of the repentant divorcees in the Kurdish region have fixed triple talaq through a swift nikah halala. “There are clerics that can fix the triple talaq for you in return for 50,000 tomans [$11],” Zara, a 40-year-old woman from the small Kurdish town of Paveh, told Al-Monitor. “In the past, the clerics would simply find a man for the woman to marry, spend the night under his roof and then get divorced and return to her first husband.”

“In the old days in our village, I remember on three separate occasions the village clergy found a crazy person and married three women to him who were subjected to triple talaq by their husbands,” Qader, a 61-year-old a farmer from Mariwan, told Al-Monitor via telephone. “Basically, this was a religious trick because the crazy person would be persuaded to divorce the women after sleeping with them for one night.”

In most cases, triple talaq is final — often used when men want a quick out, particularly if they want to remarry someone else. In that case, women are left stranded with little recourse and many questions — the division of goods and children — unsettled.

Triple talaq has been a problem in other countries as well, such as Pakistan, Iraq and Bangladesh. Women's movements have led to India first banning, then taking steps to criminalize it as unconstitutional.

Despite the challenges triple talaq presents, Iranian law presently sanctions it and allows Sunnis — as all recognized religious minorities — the right to apply their community’s own personal status laws.

But the practice of triple talaq is gradually getting more pushback from women’s rights activists, lawyers and human rights defenders who are pushing Tehran to ban it. They claim that there is judicial grounds to do so, as the family status law of recognized religious minorities only has legal authority when it does not go against the public order and does not injure public morals. The activists argue that triple talaq brings extensive harm and chaos to the lives of many women, children and families. Many Sunni Kurdish human rights defenders have begun speaking out on the suffering caused by triple talaq in the last few years.

This bloc also has support among the clergy. Ranking Iranian Sunni cleric Molavi Abdul Hamid called triple talaq “forbidden” and emphasized the need for women to enjoy equality before the law and in society in general.

The issue poses a dilemma for the Iranian authorities, who may come under fire for intervening to stop practices particular to the country's Kurdish Sunni community or may be accused of allowing unfair practices if they do not.