Israel reacted strongly to the Iranian drone that penetrated its territory and to Syrian fire targeting an Israel Defense Forces jet. 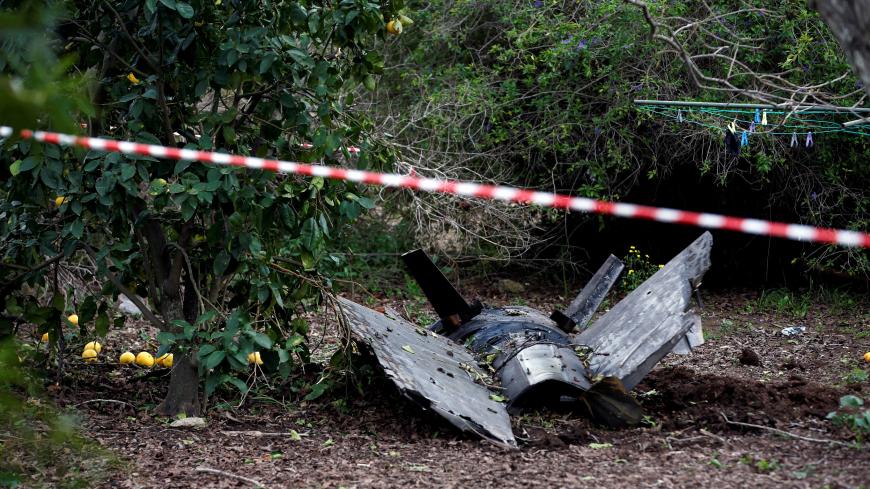 Fragments of a Syrian anti-aircraft missile are seen in Alonei Abba, about 2 miles (3.2 kilometers) from where the remains of a crashed F-16 Israeli warplane were found, at the village of Alonei Abba, Israel, Feb. 10, 2018. - REUTERS/Ronen Zvulun

If the Israeli F-16 fighter jet had been struck by the Syrian missile just a few kilometers north of where it was actually hit Feb. 10, it is quite possible that Israel, Iran, Syria and Lebanon would be at war today. In fact, the plane was hit over Israeli territory (the air force does not have to fly over targets in Syria in order to bomb them), and its pilots parachuted out safely — one of them seriously wounded — in Israeli territory, preventing a serious escalation of events. There is nothing in Israel that hits a raw nerve more than when its soldiers are taken prisoner. The last time that happened along the northern front, the Second Lebanon War broke out in 2006. On Feb. 10, we were very close to the third.

For Israel, this was a day of fighting against Iran and Syria, who had the support of Hezbollah and the passive involvement of Russia. According to the Iranian-Shiite coalition, this day of fighting led to what Hezbollah called “a new strategic era.”

From an Israeli perspective, the results were the exact opposite. Israel announced that it would continue to operate over Syria and Lebanon in order to prevent Iran from establishing itself in these regions. This was the first time that the Israeli and Iranian armies clashed openly, rather than through proxies or under the radar. It was also the first time since 1982 that an Israeli aircraft was downed by Syria’s anti-aircraft batteries. And it was the first time in the last 36 years that Israel launched a far-reaching aerial attack on the Syrian air defense system. All of this was the result of Iranian determination to gain a foothold in Syria, and Israeli determination to prevent that from happening. One determined nation against another could result in a major conflagration, but luckily, there is a certain energy operating in the region to cool down situations like this when they happen. None of the players in this dangerous game needs a war right now: not Iran, not Israel, not Hezbollah, not Assad of course, and certainly not the Russians. And so the whole thing ended with just a single day of fighting — at least for now.

On the night of Feb. 9-10, at 4:30 a.m., an unmanned Iranian aircraft penetrated Israel by way of Jordan. The aircraft was picked up and followed by Israeli radar, until it broke west over the Beit Shean Valley (just south of the Sea of Galilee) and penetrated Israeli territory.

The unmanned aircraft was modeled after an American aircraft manufactured by Lockheed Martin, which was shot down over Iran in 2011. It is relatively fast, hard to locate and shoot down, sophisticated and modern. An Apache helicopter was already waiting for it in Israeli territory. The ability of the Israel Defense Forces to identify the aircraft, follow it, wait for it at a precise location and shoot it down in the darkness of night is all laudable. The unmanned aircraft was intentionally downed over Israeli territory so that it could be studied and in order to collect any information it might offer about Iran’s real capacities.

Furthermore, just a quarter of an hour after the aircraft was shot down, the Israeli air force attacked the mobile caravan from which the drone was operated as it tried to escape the area surrounding the T4 military airport near Palmyra. The Iranian caravan was destroyed in real time, and its Iranian crew was killed. The Israeli air force says this is yet another example of its exceptional ability to act quickly and lethally.

At this stage, Israel had to decide what to do next. Should it have “contained” the incident, make do with an initial response and end it with that, or should Israel have launched a new wave of reaction? The decision was to launch another wave, in which the Israeli air force conducted a massive attack on 12 targets deep in Syrian territory. Of these targets, four were Iranian, while the remaining eight were Syrian. Russian military officials and experts happened to have been at least at one of the targets that was bombed: an airport belonging to the Syrian army.

As this article was being written, released assessments claim that Iran suffered casualties from the Israeli assault, as did the Syrian army. Israel destroyed a large number of Syrian anti-aircraft batteries, mainly SA-5 and SA-17 missiles, including some that were only just received by Syria. A Syrian radar installation upon which the country’s air defense relies was also destroyed. According to a statement by the IDF, this was the most painful blow against Syria’s air defense system since the First Lebanon War in 1982. When the smoke finally cleared over this day of fighting, each of the sides could have claimed a heroic victory. In other words, it was a tie, with each side losing valuable assets. Israel paid a steep price for its continued red line policy, Iran paid a price for violating Israeli sovereignty and the Assad regime paid a heavy price for its participation in the incident. Meanwhile, the Russians realized that their achievements in Syria and Lebanon are at risk.

On the evening of Feb. 10, Israeli Prime Minister Benjamin Netanyahu spoke with Russian President Vladimir Putin. The statement released in the wake of this conversation was terse. In fact, the conversation was very serious and tense. The message that Israel has been trying to get through to the Russians for quite a while now — whether in meetings between the two countries’ leaders or through military and intelligence connections — is that Iran has gone from being an asset operating on behalf of Russian interests into a burden. Israel effectively made quite clear that it would not hesitate to ruin Putin’s party in Syria if Israel's own interests are harmed. With the devastating blow delivered to Syrian President Bashar al-Assad’s air defense system Feb. 10, Israel showed how serious it really is. While this may have come at a price, one senior Israeli military official called it absolutely necessary and totally justified. “Assad knows that despite everything, he is still vulnerable and that Israel is not some coalition of amateur rebel gangs. We have no intention of giving in, and we have no intention of allowing Iran to establish itself in Syria or complete its precision rocket and missile project. Period,” he told Al-Monitor on condition of anonymity.

For a while now, Israel has been following events at the airport outside Palmyra, which was bombed. According to Israel’s follow-up, the Iranians arrived there quite a while ago and turned it into another one of their strongholds in the Assad state. Then, on Feb. 10, Israel crossed its own Rubicon by launching a direct attack on Iranian targets operated by the Islamic Revolutionary Guard Corps. Behind the scenes, Israel knows how to make it quite clear that if Iran doesn’t get the message, Assad will pay the price. In effect, what Israel is trying to do is to take the Assad regime hostage, now that it has finally started to stand on its own two feet again.

The main problem Israel had — and still has — is the Russian presence. How long will Putin restrain himself when confronted with Israel’s policy? Is Israel approaching Russia’s red line, risking real friction with the superpower that has located itself along Israel’s northern borders? Based on the laconic statement by Russia’s Foreign Ministry, Israel might be. The Russians called on all the parties to respect Syrian sovereignty. Things have reached the stage where more than anything else, Israel needs the protective American umbrella and the Trump administration’s active involvement in everything happening in Syria. But despite US President Donald Trump’s sharp criticism of everything his predecessor did to diminish American deterrence in the region, the impression for now is that Washington is stronger in words than in deeds. Yet soon it will have to decide which direction it is going to take.