The Saudi government's new year is off to a shaky start financially — a burden it's sharing with its citizens, leaving them to wonder just how bad things will get. 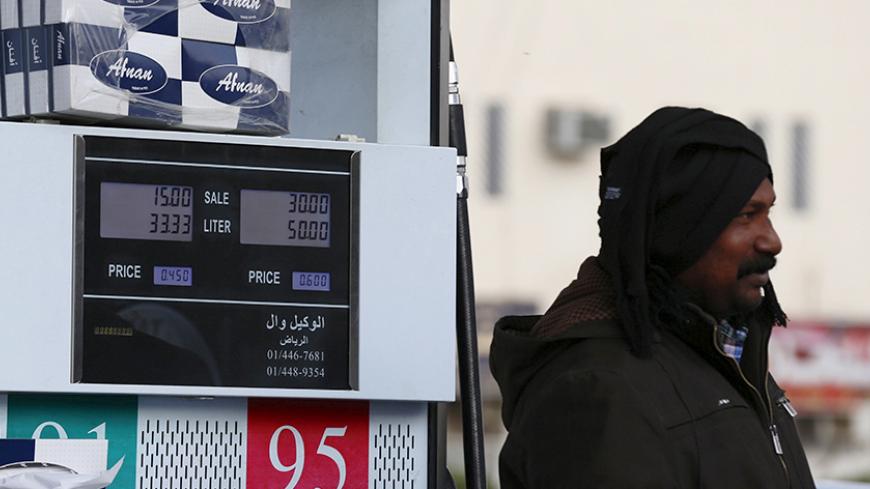 Mohammed bin Salman, the deputy crown prince of Saudi Arabia and, at age 30, the youngest defense minister in the world, holds many sensitive responsibilities. He sets prices for gasoline and services in the kingdom, handles terrorism issues and tackles the influence of Iran and its regional allies. Some Saudis have high hopes about Salman, while others are concerned because they feel they are being forced to pay the bills of past failures and ambitious future projects.

The Saudi stock market posted heavy losses two hours before the market closed Jan. 17, as oil prices plummeted below $30 a barrel. This coincided with the lifting of economic sanctions on Iran.

Before unveiling its budget Dec. 28, the Saudi government implemented a number of precautionary measures to minimize repercussions of the drop in oil prices, which it knew would only worsen with Iran set to make its big comeback to the oil global market. The government also reduced its 2016 budget, projecting a deficit of 326 billion Saudi Arabian riyals ($86.9 billion). These measures also included withdrawing 244 billion riyals from the Saudi general monetary reserves during the first half of 2015.

In August, the Saudi government issued 20 billion riyals worth of treasury bonds that were sold to a number of public sovereign institutions and local commercial banks.

The Ministry of Finance also applied austerity measures in October by instructing government authorities to cut spending on new projects and return nondisbursed amounts to the ministry's account.

On Dec. 29, Saudi Minister of Finance Ibrahim al-Assaf was quoted as saying to Al-Hayat newspaper, “Saudi Arabia will gradually apply a value-added tax of 5% as of the beginning of 2016.” Saudis thus entered 2016 anxious and pessimistic about the future. Long lines of cars stretched for hours outside gas stations on the evening of Dec. 29. The oil price hike will kick in as per the Saudi Cabinet decisions.

As the Saudi public was still puzzling over the oil price increase, the Saudi Cabinet took citizens by surprise Jan. 2 and announced the government had executed 47 people — including 41 Saudi Sunnis and four Shiites, along with controversial Sheikh Nimr al-Nimr. The executed were described by Saudi authorities as straying apostates involved in terrorist acts and inciting violence.

The death penalty issued against Nimr and the others had been upheld by the Supreme Court in October and was passed on to the Saudi king for approval the same month. Yet the execution wasn't implemented until Jan. 2. So far, Saudi authorities have not explained whether the delay was caused by routine administrative and security procedures or was related to other reasons.

Residents of the predominantly Shiite Qatif province — which is adjacent to oil wells in eastern Saudi Arabia and which witnessed the 1979 Qatif Uprising calling for freedom and equality — were more enraged by the execution of Shiite cleric Nimr than by the price increase of oil derivatives and public services affecting the standards of living of all citizens, whether Sunnis or Shiites.

It seems Riyadh successfully exploited Nimr's execution in the media and at diplomatic levels. For one thing, he was convicted along with Sunnis accused of terrorism, probably to make sure the Saudi ruling was not seen as biased and sectarian.

Riyadh was also very careful to choose the day of the execution to overshadow the decisions to increase the prices of oil derivatives and public services and divert the public's attention. It also allowed Riyadh to ultimately portray Iran's anger about Nimr's execution as a kind of interference in Saudi affairs and a sectarian incitement.

Mohammed bin Salman gave an interview to The Economist on Jan. 4. In his answer to the first question on the executions, he said the government had observed all of the rights of the convicts before judgment was rendered and that the Saudi court does not make any distinction between convicts.

In the interview, he denied any taxes had been imposed, other than the 5% value-added tax on accessories, soft drinks and cigarettes.

Saudi Arabia had never imposed any tax system in the past, except on foreign companies operating inside the kingdom, who are taxed 20% of their profits and 5% of annual transfers. However, the Saudi Department of Zakat and Income Tax does collect a 2% zakat (obligatory charitable payment) from Saudi and Gulf companies operating in Saudi Arabia. The total revenues of the department amounted to 30 billion riyals ($8 billion) in 2015.

Answering The Economist’s question of whether he believes more taxes can be imposed in Saudi Arabia without increasing the people’s representation in the Saudi monarchy, the prince said, “Again, one thing is not related to the other. This is not a decision from the government against the people.” Rather, he said, the government represents the people and does not make decisions about reforms without conducting workshops that include a variety of citizens.

The prince's answer was vague. What did he mean by saying taxation and the people’s representation in the Saudi monarchy are not related? Did he intend to say that the decision-makers in the ruling family — the king and the crown princes — will allow the people to take part in power apart from paying taxes or on the contrary?

However, the fact that the prince asserted to The Economist that he will rely on workshops to introduce new reforms to a major state such as the kingdom of Saudi Arabia — while neglecting the role of elected municipal councils, the Shura Council and the need for an elected parliament — does not bode well for the monarchy.

There are clear signs that the descendants of the founder, King Abdul-Aziz Al Saud, have the same logic as their parents in terms of making unilateral decisions. The Saudis did not know where their money went in the past and will not know where it is going now — all they know is that they will pay a lot.