If Canada cancels a lucrative arms deal with Saudi Arabia over the use of Canadian-sold arms against civilians, it could affect Riyadh's ability to purchase US and UK arms as well. 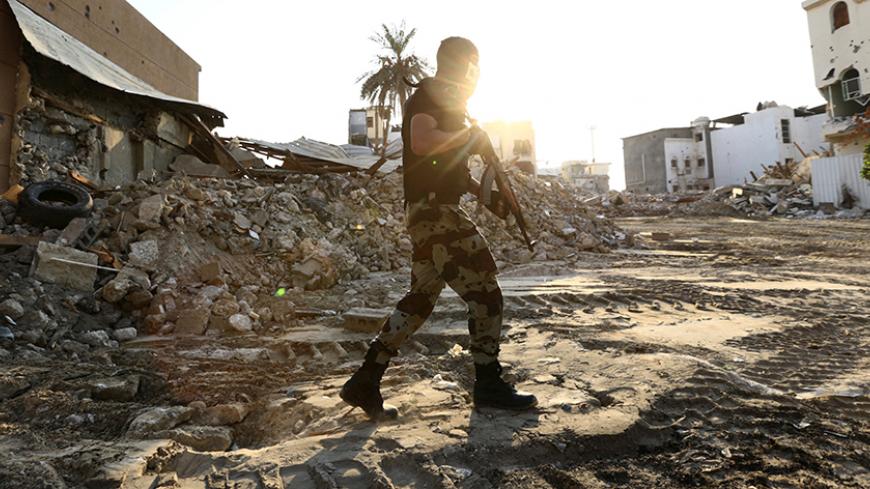 A Saudi special forces member holds his weapon as he walks in the town of Awamiya, Saudi Arabia, Aug. 9, 2017. Awamiya has been the site of clashes between Shiites and the Saudi Arabian National Guard this year. - REUTERS/Faisal Al Nasser

Canada is in the midst of a crucial review of its arms sales to Saudi Arabia after the press released a video of the Saudi Arabian National Guard using Canadian-built armored vehicles to suppress Shiite unrest in the kingdom. At stake is a $15 billion arms deal signed in 2014. How Canada responds could be a harbinger for the United States and the United Kingdom, Saudi Arabia's key arms suppliers.

Canada has long supplied infantry fighting vehicles for the Saudi Arabian National Guard, the elite Praetorian Guard that defends the royal family from its enemies. Canadian regulations on arms exports stipulate that weapons supplied by Canada to other countries cannot be used against the buyers' civilian populations. Ottawa signed the $15 billion deal, one of its largest, to deliver a new generation of infantry fighting vehicles for the National Guard with the explicit assurance to the Canadian parliament that the weapons would not be used against civilians.

In 2011, King Abdullah had deployed the National Guard, equipped with an earlier generation of Canadian armor, to prop up the Khalifas, Bahrain's minority Sunni royal family, which faced a majority Shiite population demanding profound political changes that would have made the island kingdom the first democratic government in the Arabian Peninsula. The Saudi intervention was the first instance of an Arab Spring rebellion being stymied and underscored the Saudi royal family's determination to lead the counterrevolution against reform in the Arab world.

Canada's conservative Canadian government at the time argued that the Saudi Arabian National Guard was not directly implicated in killing Bahraini civilians as the reform movement was crushed. Prime Minister Justin Trudeau, who took office in 2015, inherited the 2014 arms deal and the tensions over Saudi use of Canadian weapons.

Trudeau's government has portrayed itself as more inclined to promote human rights than its predecessor. It also governs a Canadian public that, like those in most Western countries, is more skeptical about Saudi Arabia and is more inclined to question the wisdom of supporting an absolute monarchy that propagates Wahhabism, a uniquely intolerant brand of Sunni Islam. The war in Yemen only added to Canadian concerns about the wisdom of backing Saudi Arabia. After 2½ years, the Saudi campaign is a quagmire and has had and continues to have horrendous consequences for the Yemeni people.

Under King Salman bin Abdul-Aziz Al Saud, Saudi Arabia has become more sectarian than ever. Shiites in general and Iran in particular have been branded enemies of the state. A long-simmering conflict with the kingdom's minority Shiite community in the oil-rich Eastern Province has escalated under Salman. The epicenter of the conflict is the oasis of Qatif, especially Awamiya, an old city with a historic core from the Ottoman Empire that was built before the Saudis conquered it from the Turks early in the 20th century. It was the hometown of Shiite cleric Nimr al-Nimr, whom the government executed in January 2016 for allegedly supporting Iran and violence. His execution led to the rupturing of diplomatic ties between Riyadh and Tehran.

The old city has since been all but destroyed after fierce clashes between the Saudi Arabian National Guard and Shiite activists this year. Video shows widespread damage and destruction. Riyadh does not dispute the intensity of the clashes. The Saudis have promised to rebuild the area with a modern urban environment. The Shiites are understandably skeptical. Successive Saudi kings have failed to improve life for the Shiite population.

Riyadh argues that it is fighting Iranian-inspired terrorism, citing a long history of Iranian subversion in the Eastern Province, highlighted by the 1996 truck bombing of the US Khobar Towers barracks that killed 19 US Air Force personnel and wounded hundreds of Saudis. The Islamic Revolutionary Guard Corps and Lebanese Hezbollah have been implicated in the attack for supporting Saudi Shiite militants trained in Iran and Lebanon. Saudi Shiites argue that the royal family exaggerates Iran's role and has never treated them as equals.

The National Guard is responsible for order in the Eastern Province. It has been the sinecure of one branch of the House of Saud since the 1960s. Prince Mitab bin Abdullah was given command of the force in 2010 by his father, King Abdullah, and has remained in charge under Salman. He is one of the most powerful members of the family. His National Guard will not hesitate to use extreme force to crush unrest.

The National Guard has always been regarded as more loyal to the monarchy than the regular military is. It recruits among the conservative tribes of the Nejd, the kingdom's Sunni heartland. Abdullah has carefully courted these tribes as a base. The National Guard also provides protection for the holy cities of Mecca and Medina and is the defender of the Wahhabi order.

The Globe and Mail, a Canadian newspaper, obtained photographs of the Saudi Arabian National Guard using Canadian-sold vehicles in Qatif. Under pressure from the media and public, Trudeau said the government is investigating the situation. It is likely weighing the potential loss of some 3,000 jobs in Ontario against its human rights record. Thus, there is widespread suspicion the government will try to avoid a clear decision.

A Trudeau decision to halt the sale to the Saudi Arabian National Guard would represent a major humiliation for the kingdom, especially for the National Guard. It would also energize the growing opposition to arms sales to Saudi Arabia in Washington and London. The Saudi-led war in Yemen has created a humanitarian catastrophe and has led to widespread opposition to all arms deals with the kingdom. The US Congress only narrowly approved an arms sale for the Royal Saudi Air Force in June. All eyes are now on Ottawa.