Saudi Arabia's diplomatic decisions since King Salman took over the rule of the kingdom in 2015 have caused much controversy, with the bombing of a school bus in Yemen and the row with Canada over a tweet as recent examples. 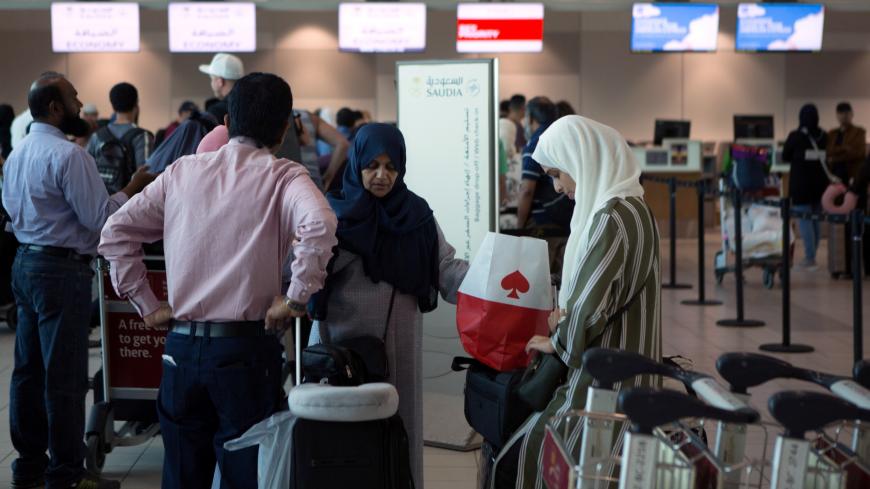 People line up to check in for a flight from Canada's Toronto Pearson International Airport to Riyadh, Saudi Arabia, Aug. 10, 2018. Saudi flights to Canada are to halt Aug. 14 as a result of a political row. - REUTERS/Chris Donovan

Since the ascension to the throne of King Salman bin Abdul-Aziz Al Saud in 2015 and the rise of his son Mohammed bin Salman first as defense minister and then as crown prince, the kingdom’s foreign policy has faced difficult choices in a fraught region. With rare exceptions the Saudis have lurched from one poor decision to the next; the Canada caper is the latest. The erratic diplomacy is hurting the kingdom.

The first tough decision of the new leadership is still their worst, to intervene in the Yemeni civil war. Worried that Iran was set to take over Yemen, the new, inexperienced Saudi leadership panicked. The Zaydi Shiite Houthis were on the doorstep of taking Aden, the last major city out of their control. Operation Decisive Storm turned into the world’s worst humanitarian catastrophe of our times. The Saudi bombing of a school bus this week is symptomatic of the Saudi coalition’s difficulties in avoiding civilian casualties in launching airstrikes against targets in a poor, backward country.

Two American presidents have colluded in the war, providing political and military support for the Saudi coalition — a black mark on our country. So has the United Kingdom. The war has no end in sight, and the total collapse of the poorest nation in the Arab world is an increasingly likely outcome, according to the United Nations.

The blockade of Qatar was also intended to produce a quick Saudi victory. The Qatari emir was excommunicated from Wahhabi Islam and was then to be deposed. As in Yemen, the Saudi leadership had no concept of how to implement its decision; Riyadh and its allies had a goal but no serious scheme to achieve it. Some reliable evidence suggest that they were planning a military invasion of Qatar but US Secretary of State Rex Tillerson vetoed the plan (probably without President Donald Trump’s knowledge).

The Saudis ended up in open-ended and expensive quagmires in Yemen and Qatar with no strategy to achieve success. Fortunately for Riyadh, the usual leader of the international community, America, under Trump is largely oblivious to the damage done. The palace’s biggest success has been in courting a president who does not care about human rights, humanitarian catastrophes or regional stability. The relationship was cemented by Trump’s visit to Riyadh last year and Prince Mohammed’s trip to the United States this year. A visit to Washington by the king is in the works.

Congress, on the other hand, is turning against the kingdom, as is the press and the public. Mohammed is increasingly seen as an autocrat who can't tolerate any dissent, rather than as a modernizer opening up the country. Criticism and dissent is not tolerated, even if it is the dissenting opinion of women who fought for the right to drive in the only country in the world that ever made driving a gender-based issue.

Indeed, the international business community has come to a very different conclusion about the country’s policies, especially in the wake of Mohammed's shakedown of his own people last fall to pay for his expensive adventures. Hundreds were detained without charge, and then forced to turn over their assets to the government. Foreign direct investment in the kingdom dropped 80% from over $7 billion in 2016 to $1.4 billion in 2017, according to the United Nations, and down from over $12 billion when King Abdullah was still on the throne. Jordan and Oman each attracted more foreign investment last year than Saudi Arabia. The number of companies also fell significantly. Concerns about the rule of law and arbitrary detention are also encouraging capital flight.

Foreign investment is crucial to Saudi Arabia’s ambition to diversify the economy and create new cities; Vision 2030 needs robust foreign investment. It was entirely predictable that the erratic policies of the royal palace would discourage investors who value stability and predictability — open-ended wars and feuds do not encourage confidence in decision-making.

The Saudi decision to expel the Canadian ambassador from Riyadh, freeze trade ties and withdraw 15,000 Saudis from Canadian schools and hospitals in response to the Canadian foreign minister protesting the detention of female critics is another poor call by the Saudi leadership. Saudi flights to Canada will halt Aug. 14. This is reckless. More Saudis than Canadians will have their lives disrupted.

Riyadh is undoubtedly pleased by the weak response of Washington to the Saudi moves; the administration has again shown its total disregard for human rights. But the Saudis have gotten little concrete support from their Arab allies in the Canada boycott.

The most disturbing piece of the Saudi war on Canada is a tweet. It was quickly removed, but it raises profound questions about the kingdom and its current leadership — questions Salman should very much want to avoid. The tweet, which was posted in English, French and Arabic, showed a picture of a passenger plane descending into Toronto and was accompanied by a threat against anyone who criticizes the kingdom.

The message was clear: Toronto will suffer a catastrophic terrorist attack like 9/11. It was also an implicit endorsement of the 2001 al-Qaeda attacks on America.

The US and Canadian Intelligence services ought to be seeking the answer to who posted such a threat. The press has linked the site involved to the royal palace but that is unconfirmed. The timing suggests that it was posted by parties in the know about what the government was planning to do. The Saudi media is carefully controlled by the palace. The quick withdrawal of the message does not alter the fact that it was sent for a purpose — indeed that may have been the intention.

Conspiracy theorists have long claimed that the Saudi government was either deliberately blind to the al-Qaeda 9/11 plot, or, worse, complicit in it. The evidence and multiple investigations do not support such theories. But they remain persistent and at least one points a finger at one of the king’s sons, who died under allegedly suspicious circumstances. That theory is laid out in a book titled "Secrets of the Kingdom." The Toronto photo tweet will only reinforce questions about Saudi behavior.

The entire spat is certain to further discourage investment in Saudi Arabia. It is very much like a similar tangle with Sweden last year. Prime Minister Justin Trudeau is standing strong in his position, as he should. He should go further and suspend Canada’s $12 billion arms deal for infantry fighting vehicles with the kingdom until the war in Yemen ends. That would get the Saudis' attention. America should stand with its friend and ally and suspend its own arms supplies to the kingdom until it stops the war.