The future of Saudi Arabia's plan to reduce its dependency on oil income is in question after the king scrapped the kingdom's plans to take the national oil company public. 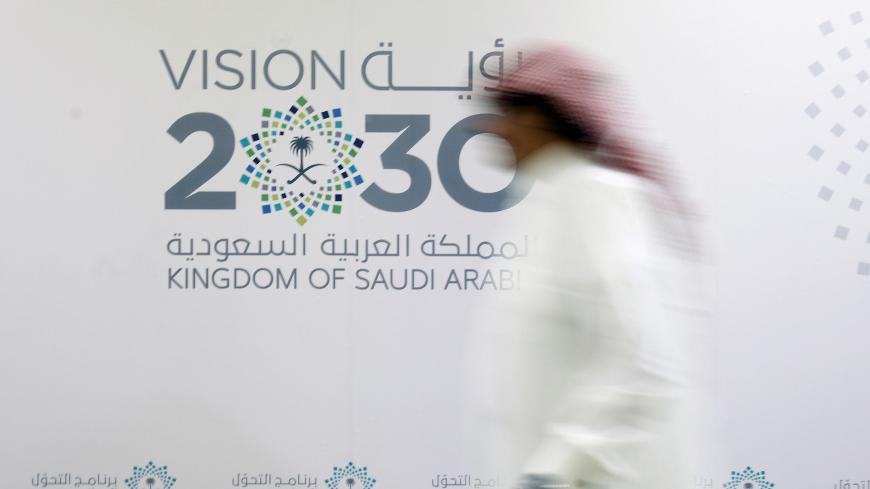 A man walks past the logo of Vision 2030 after a news conference in Jeddah, Saudi Arabia, June 7, 2016. - REUTERS/Faisal Al Nasser/File Photo

Saudi Vision 2030, the brainchild of Crown Prince Mohammed bin Salman to reduce the kingdom’s dependence on oil income, is coming undone. The king has stripped away the central pillar of the project. The country is becoming more autocratic and repressive. The slide toward greater repression is prompting capital flight.

The centerpiece of the ambitious plan was to open up Aramco, the national oil company, to outside investors. Five percent of the company would be opened initially, creating an initial public offering, or IPO. The crown prince estimated that the company would be valued at $2 trillion, creating the world's largest IPO of $100 billion.

From the beginning the plan had serious problems. The company was overvalued considerably. There were difficulties in finding a stock exchange market. President Donald Trump pressed the Saudis to select New York, but there was a chance that a New York listing would place the IPO at risk of being seized in the trial underway by claimants asserting that Saudi Arabia was a party to the Sept. 11 attacks. London has been compromised by the Brexit campaign, which is raising questions about the future of the British banking sector.

At home, critics of the plan asserted it would place the nation’s largest asset in the hands of foreigners, effectively reversing the Saudization of the oil industry. Other critics said the deal would force the government to open up the government account and expose the role of the royal family in the profits of the business.

The crown prince’s so-called anti-corruption campaign last November — in which hundreds of prominent Saudis, including members of the family, were detained and forced to hand over assets to the government — added further difficulties. The shakedown underscored the absence of due process and the rule of law in the kingdom and discouraged foreign investment. It also sparked major capital flight as the wealthy sought to protect their assets abroad. One authoritative estimate is that almost $150 billion in capital has left the kingdom in the last two years.

The king decided to scrap his son's plan in June, according to well-sourced reports from Riyadh. King Salman heard from numerous elements in the royal family who were opposed to the plan and decided to shelve it and dissolve the planning process for creating an IPO.

This is the second time this year that the king has overruled his son on a major issue. Earlier this year the king took a much harder line on Jerusalem than the crown prince. The king forcefully rejected the Trump administration's decision to move the US Embassy to Jerusalem and to “take Jerusalem off the agenda” for a future peace agreement.

With the economic component of Vision 2030 gone, the social reform process became more important. Letting women drive has been the signature accomplishment for the social reform plan, but it has been badly discredited by the government’s arrests of numerous female advocates of gender reform. The arrests demonstrate the regime’s acute sensitivity to any kind of dissent at home or criticism from abroad.

The arbitrary detentions last fall and now of women are part of a broader trend of greater authoritarianism and repression in Saudi Arabia. Saudi Arabia has always been an absolute monarchy that stifles dissent. There is no freedom of assembly or speech. Public executions are a mainstay of Saudi life.

But the repression is getting worse. The shakedown last year was unprecedented in Saudi history. Some of those detained are still under arrest. Public executions are more frequent. Prominent clerical critics have been rounded up.

Behind the scenes, the war in Yemen adds to the pressure on the royal palace. The war is the crown prince’s signature foreign policy initiative and it's become an expensive quagmire with no end in sight. Criticism of the war is widespread in the Muslim world and the West. It is likely that there is mounting criticism in the kingdom, too. The Houthis are confident enough to stall the United Nations' call for talks in Geneva.

As always, the minority Shiite community is the first to be targeted. Repression in the Eastern Province has been fierce and violent. A Saudi Shiite woman may face the death sentence this fall, which is unprecedented for a Saudi woman.

Criticism from abroad is also prompting an erratic response. The withdrawal of Saudi students from Canada is the best example. Ottawa called for the freedom of some Saudi women critics and Riyadh responded with a temper tantrum that only further discouraged confidence in Saudi decision-making.

Vision 2030 is still the government’s game plan. Its social reforms, including women’s driving, opening cinemas and entertainment facilities, are popular. But this will not reduce the country’s economic dependence on oil. That vision is a mirage.