Could Egypt be key to political solution in Syria?

The Russian air operation in Syria, the US suspension of its training program for new Syrian rebels and its rapprochement with Iran call for an Egyptian mediation to end the war in Syria. 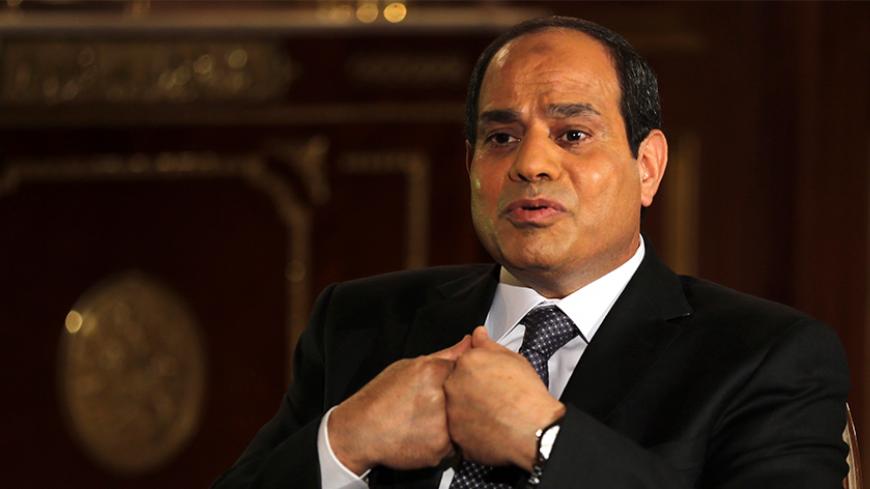 The Syrian crisis has taken a turn that could allow Egypt to act as a mediator in reaching a political settlement in Syria. Several Syrian and regional players are focusing on the fight against terrorism rather than on settling their political conflicts with President Bashar al-Assad’s regime and its opposing forces.

The priority has shifted away from the war between revolutionary or Islamic movements such as the Muslim Brotherhood and a regime headed by a Shiite president who embodies “tyranny” for the opposition. Now at center stage is the conflict between Syria and the Islamic State (IS), whose growing influence threatens the Arab world and the Middle East.

Egyptian President Abdel Fattah al-Sisi, whose country is part of the international coalition against IS in Syria and Iraq, reiterated this stance in a Sept. 28 interview with CNN. Sisi was vocal about his concerns — since Egypt is fighting terrorism in its territories — when he said, “I am afraid that if the Syrian Arab army falls, its arms and equipment will fall in the hands of the radicals, thus giving them an additional push.” He added, “The situation between Assad and the Syrian opposition can be dealt with.”

The intensifying crisis requires conflicting parties (Assad’s regime and the opposition) to seek a compromise or a political settlement as per the Geneva communique of 2012, which offers a perspective for the future of Syria within a firm timetable and without any further violence. The communique clearly stipulated the release of political prisoners, a transitional period capable of producing a freely and fairly elected multiparty parliament and a new constitution followed by a popular referendum. None of these steps oppose Russia’s, Iran’s and Egypt’s idea of Assad remaining in power at least until the security situation stabilizes and Assad’s hope of leaving power in a safe manner later.

A compromise remains a far-fetched goal since it has to be the product of an agreement between the regime and the opposition as well as among the countries supporting both sides of the conflict: on the one hand, Assad's allies Russia and Iran, and on the other the United States, Saudi Arabia, Turkey and the rest of the opposition’s allies.

However, such agreement could prove feasible if all the parties were open to compromise, which is essential in the fight against IS. Otherwise, any intransigent party will have to pay the price for adding further confusion to the political situation in Syria at the expense of the nation's war against the terrorist group.

In this context, Egypt could play a central role. At a joint press conference Oct. 4 in Cairo, following a meeting between Sisi and his Tunisian counterpart, Beji Caid Essebsi, Sisi stressed the need to work for a comprehensive political settlement to the conflict in Syria. The leaders agreed that such a settlement should preserve the unity and security of the nation while meeting the needs of its citizens.

In the September CNN interview, Sisi refused to admit Egypt’s support for Assad, but he indicated he is against overthrowing the regime by force, which would lead to the partition of Syria and the fall of its army. This may mean that the Egyptian government does not mind Assad stepping down as part of a gradual settlement that preserves the unity of Syria and the safety of the army.

Egypt’s role in the political settlement of the Syrian crisis was reflected in an Oct. 17 meeting between Mikhail Bogdanov, the Russian president's special representative for the Middle East, and Egyptian Foreign Minister Sameh Shoukri. The men issued a joint statement saying they have agreed it is necessary to implement a political solution based on the Geneva communique. This step would guarantee the formation of a transitional body in Syria while at the same time continuing to fight terrorism.

Recent events in Syria offer an exceptional opportunity to Egypt to assume a mediator role between the warring parties to reach a political solution.

On Sept. 30, in a dramatic escalation of events, the Russian air force launched an aerial operation against IS ground targets in Syria. The president of the National Coalition for Syrian Revolutionary and Opposition Forces (SNC), Khaled Khoja, said Sept. 30 that the Russian airstrikes killed 36 civilians that day. He accused Moscow of supporting the regime and creating chaos in Syria.

The Russian airstrikes not only hit IS targets but the Syrian opposition too, which could pressure the SNC into accepting a political settlement.

The Russian operation in Syria probably represents a pressure play on the coalition to accept a political solution, since 25% of the SNC’s higher committee accepted the initiative presented by UN special envoy Staffan de Mistura during an Oct. 10 vote. Although this represents a sizable percentage, de Mistura's initiative was roundly rejected. Moreover, some of the coalition forces are “intransigent toward any political solution and insist on the immediate departure of Assad, no matter how hard it is according to many points of view amid the threats facing Syria,” Hassan Abdul-Azim, the head of the National Coordination Committee for the Forces of Democratic Change, told Al-Monitor

A senior SNC official, who spoke to Al-Monitor on condition of anonymity, said, “The Russian operation certainly adds pressure on some of the SNC’s parties who were indeed the 25% who approved de Mistura’s initiative — although this initiative did not require the immediate departure of Assad. However, this initiative has nothing new to add to the previous initiatives — which were met with stronger rejection, reaching 100% at times — amid the absence of any pressure like the one brought on by Russia’s bombing.”

Abdul-Azim added that Assad’s intransigence also hinders any attempt at a political settlement, though he pointed out that Russia wields the greatest influence on Assad regarding a political solution.

Russian President Vladimir Putin stated Sept. 4 that Assad is ready to allow a "healthy" opposition to share power and hold immediate parliamentary elections; that is probably the result of Russia’s pressure. Putin also noted the unification of forces in the fight against terrorism should proceed along with a political process within Syria.

The Pentagon announced Oct. 9 that it had abandoned its efforts to train rebel forces, deemed “moderate Syrian opposition,” and would focus on supplying arms and ammunition to Arab rebel commanders of existing Syrian units after screening them. On Oct. 10, the United States said it had resumed talks with Russia on air safety during bombing campaigns in Syria.

The new US stance may have shocked the SNC, whose forces were supposed to be trained by the United States. In light of these positions, the SNC was led to frustration over receiving further US support, as the SNC source believes these positions were the reason why more voters approved de Mistura's political solution.

The US-Iranian rapprochement following the nuclear deal earlier this year also raises Saudi concern and encourages the Arab kingdom to maintain strong relations with Egypt for fear of Iran and Egypt developing relations; both share a similar position in the Syrian crisis.

The Egyptian government can seize the opportunity to convince Saudi Arabia — a main ally and arms supplier to the SNC and armed opposition in their fight against Assad — to pressure the opposition into accepting a political settlement.

This reasoning concurs with political analyst Bahaa al-Maghawry’s statement to Al-Monitor: “If Saudi Arabia agreed to a political settlement, this would leave Turkey as the SNC’s last ally refusing a political solution. But Saudi Arabia could also convince Turkey, as the two share a mutual stance.”

It seems quite possible that Saudi Arabia will accept a political settlement in Syria in light of the kingdom’s rapprochement with Russia (Assad’s ally) after both parties agreed June 18 on the establishment of 16 nuclear reactors in Saudi Arabia, with Russian help. Also, Saudi Defense Minister Mohammed bin Salman and Saudi Foreign Minister Adel al-Jubeir met Oct. 11 with Putin in Russia and agreed on the necessity to reach a national Syrian reconciliation.

Although de Mistura’s initiative was rejected, the above-mentioned factors should lead Egypt to assume a mediator role in reaching a political settlement in Syria, especially after it expressed its goodwill by hosting the Syrian opposition’s conference in June. However, these factors remain hypothetical and could be seen by the parties only as leeway to gain time and hide their true intentions from the Syrian and international public.