Despite airstrikes, is Russia still working toward political solution in Syria?

Russia appears to be considering various political resolutions to the Syrian crisis, possibly including one without Syrian President Bashar al-Assad. 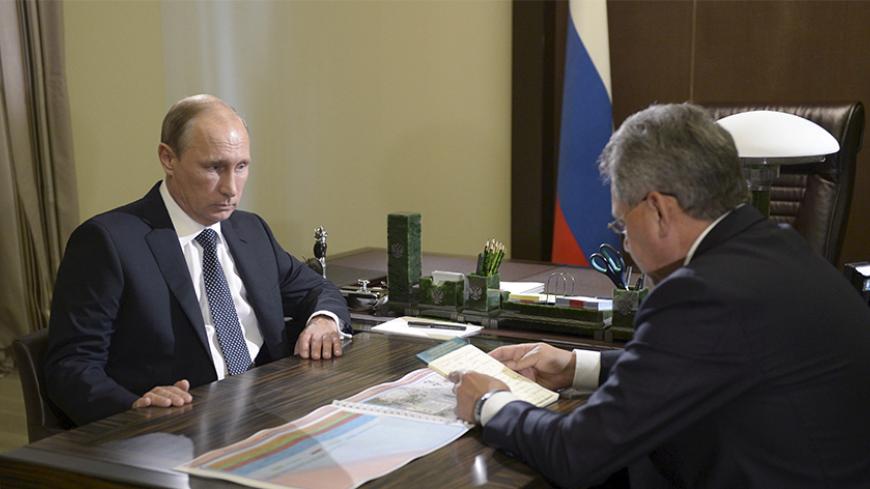 Russian President Vladimir Putin (L) meets with Defense Minister Sergei Shoigu at the Bocharov Ruchei residence in Sochi in regard to the rockets launched at the Islamic State in Syria, Oct. 7, 2015. - REUTERS/Aleksey Nikolsk

In recent days, it has become apparent that Russia, while continuing its air campaign against the Islamic State (IS) and Jabhat al-Nusra positions in Syria, is paying attention to the search for a political solution to the Syrian crisis. Some analysts even argue that Moscow is beginning to lean toward "the idea that a political solution for the region would include a post-Assad Syria," as Nikolay Kozhanov from Carnegie Moscow Center wrote regarding Syrian President Bashar al-Assad.

Russia sincerely believes what it is doing serves the interests not only of Shiites and non-Muslim minorities in the Middle East, but the whole Islamic world, including the Sunni majority — to which 20 million Russian Muslims belong. Over the years, in various parts of the North Caucasus and the Volga region, the victims of these terrorists who are trying to brainwash Muslims have been ordinary believers, imams, muftis and prominent theologians. The number of young Muslims duped via the Internet and recruited to join IS has already crossed the "red line."

It appears Moscow didn’t expect Riyadh to react so negatively to the Russian military campaign against the jihadis in Syria, considering they threaten the security of the kingdom no less than Russia’s. After all, the Saudi regime has always been one of the main targets of these Islamic radicals. Close cooperation with Iran, however, without which it would have been impossible to conduct the military campaign effectively, has been like a red cape to a bull for the Saudi establishment, especially the religious one, which is lashing out at Moscow. Still, one can hear voices of support among the Saudi public for Moscow’s actions to weaken one of the kingdom’s enemies, namely IS.

However, there are those who believe Russian airstrikes only increase the flow of militants to the ranks of the radicals. Russia is actively challenging this view. It is important to Moscow to explain Russian aims, especially to the Sunni majority of the Muslim world, and prevent the incitement of anti-Russian sentiment by the extremists, who capitalize on Sunni solidarity. Unlike its allies in the "Baghdad coalition," especially Iran, Russia cannot be suspected of pursuing religious objectives, and this works in its favor. The Kremlin doesn’t want to interfere in any way in any intra-Muslim showdown, especially since Russia's population includes a Muslim community whose members are all adherents of the Hanafi and Shafi’i schools of thought.

Moreover, Russia didn’t and doesn’t have any ambition to "dominate" in Damascus, which is evident in Assad’s intransigence with Moscow on issues related to negotiations with the opposition. In Spiegel Online, Christoph Reuter even argues that Assad asked Russia for help to contain the Iranians, putting himself in a position "to play off his two protective powers against each other." However, doesn’t this sound a little bit too sophisticated?

According to his theory, crusades have supposedly been organized by Byzantium (sic!), while the Russian Orthodox Church has called Russian President Vladimir Putin’s actions in Syria a "holy war" (naturally, this isn't the same as Byzantium’s campaigns). Russian military officials would be very surprised to hear they are conducting some kind of religious war. They know they haven’t been sent to war, but to a time-limited air campaign against a dangerous enemy that threatens the security of their country. They aren’t really concerned about the Sunni-Shiite divide.

As for Israel, while the vast majority of Russians strongly disapprove of Israel’s policies toward the Palestinians — whom Russia has always supported — they nonetheless appreciate the Israeli government for its neutrality in the Syrian crisis and Russia's actions in the region. From their side, Russian officials have guaranteed Israel that no violence against the Jewish state will come out of the Syrian territory where Russia and its allies operate.

At the same time, as written in a Jerusalem Post editorial Oct. 9, "Israel must be careful not to be seen to be working with Moscow against the Syrian opposition." Anyway, Moscow doesn’t intend to work against all Syrian opposition, least of all in collaboration with Israel. Moscow doesn’t need anything from Israel but neutrality in Syria, though Russian analysts monitor the views expressed in the Israeli media. Here, journalist Amotz Asa-El’s opinion is instructive: "If indeed Russia emerges as post-war Syria's political sponsor, it might keep a lid over Israel's northern enemies."

Expecting that the Syrian Arab army will be able to drive out the terrorists with the support of the Russian Aerospace Defense Forces, Russian analysts are pondering where IS fighters may flee. They could melt into the local population, go into the areas of Iraq under their control or move to Turkey and on to Europe. How can they be prevented from going to Central Asia and farther on to Russia?

A few days ago, on the eve of a large-scale offensive by the Syrian army, the Russian Foreign Ministry announced — in an attempt to fend off criticism that Russia allegedly bombs the moderate opposition — that it is ready to establish contacts with the Free Syrian Army (FSA). Likewise, the ministry would be open to discuss the possibility of involving the FSA in "creating conditions to begin the process of finding a political settlement to the Syrian crisis through negotiations between the government of Syria and the patriotic opposition."

At the same time, the issue of which opposition groups qualify as "patriotic" and which don’t hasn’t been settled yet. On this point, Russian experts hold contradictory and often clashing viewpoints. According to one interpretation, any group that carries out military operations against the legitimate government of Syria must be suppressed: Dialogue can only be conducted with those opponents who renounce armed struggle. According to another, apart from IS and Jabhat al-Nusra, which are on the list of terrorist organizations, only those groups fighting in alliance with them can be targeted by airstrikes. A third interpretation indicates it is necessary to have dialogue also with certain armed groups, while urging them and the government to start negotiating.

Putin and Foreign Minister Sergey Lavrov mentioned the FSA as a possible partner in the dialogue, which is a step toward a differential approach to the armed opposition. It remains unclear whether other groups will be added to the dialogue. This approach is consistent with Moscow’s stance of promoting the peace process in Syria, in parallel to its air force and navy conducting operations, and to fully support Damascus in the fight against terrorism.

Moscow pins great hopes on UN Special Envoy Staffan de Mistura’s plan for peace talks, which has been facing serious challenges. The Kremlin doesn’t exclude resuming its mediation mission, which includes trying to convene soon a third meeting in Moscow among representatives of the opposition, civil society and government officials. Such a meeting need not be seen as an alternative to de Mistura’s plan, or even Geneva 3, as Russia stresses its commitment to the Geneva Communique of June 30, 2012, and supports new talks in Geneva. Russian experts believe that, given its renewed confidence, Damascus will be more responsive than before to calls from Moscow — to which it owes so much — to implement reforms and start negotiations with the patriotic opposition.

There is no evidence that there have been civilian casualties as a result of Russian airstrikes. Of course, the tragic incidents in Yemen and Afghanistan — where innocent civilians have fallen victim to the bombings — illustrate that unfortunately no military, including those with the most modern and sophisticated weapons, is immune from mistakes. The challenge is choosing a strategy that prevents such incidents as much as possible. In any case, the Russian military and other officials have repeatedly pointed out that facilities occupied by civilians are excluded from the targets for airstrikes, while data on terrorists’ military installations received from the Syrian side are cross-checked several times from different sources.

Will all these efforts help Russia achieve a political settlement for Syria?