Why Syrian opposition rejected the UN's plan for Syria

The Syrian political and military opposition factions have shown, in a first-of-its-kind movement, unity in rejecting Staffan de Mistura’s plan to form committees that would work with both the opposition and the Syrian regime. 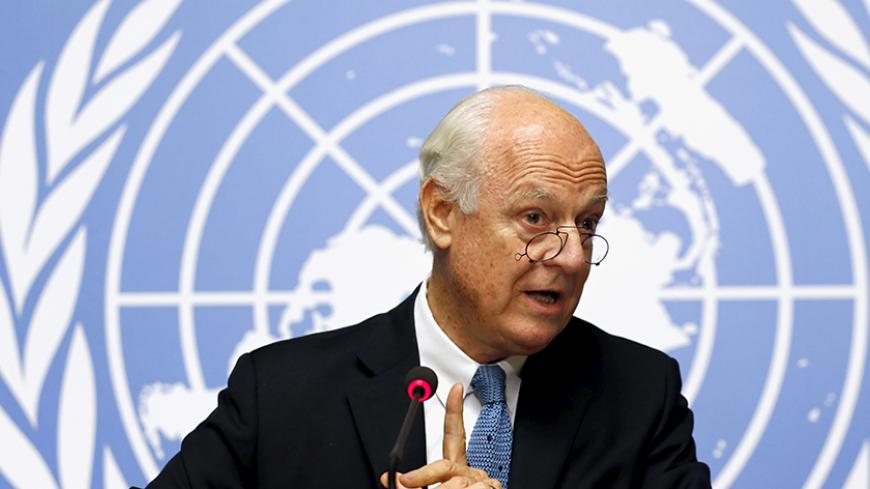 After the Syrian revolution broke out in March 2011, several types of opposition movements formed. The Syrian public was divided after the first year between those who supported arming the opposition and forming the Free Syrian Army (FSA) and those who wanted to maintain the peaceful political movement.

However, now four years into the revolution, being armed has become a reality imposed on everyone. But the revolutionary brigades under the FSA’s umbrella always lacked a unified leadership; they are organized groups with each group following its own leader. The groups were able to establish a loose structure for the purposes of organization, planning and joint work. Under that network, the groups turned into alliances, as some of them merged together, but they still weren't able to agree on a single command. The opposition's factions held different ideologies, as did their backers, some of which had their own ideas about shaping Syria’s future.

After many Western and Arab meetings and initiatives, which failed one after the other, in July 2014, the UN Security Council finally appointed de Mistura as a UN envoy and mediator between the Syrian regime and the opposition. A year later, in August, de Mistura formed four committees to change the current Syrian regime through a political transition. These committees were to work with both the Assad regime and the opposition to solve the Syrian crisis.

On Oct. 1, for the first time ever, Syrian armed factions agreed on something: They rejected de Mistura’s initiative. Seventy-five of the largest military factions operating under the FSA’s name issued a statement, which political experts and academics described as the first of its kind in terms of the quality of the diplomatic speech. In the statement, the factions stressed their rejection of de Mistura’s initiative in its current form, saying it contains loopholes that could lead committee members into political traps from which there would be no escape.

Col. Maamoun al-Omar from Idlib, a deputy commander of the 101st infantry fighting under the FSA banner, told Al-Monitor by phone, “The FSA’s mission is purely military in terms of protecting the Syrian territory from division and protecting civilians. But it also believes in a political solution to find a way out of the Syrian crisis. This phase necessitated unifying ranks between politicians and military men, and this is why the [opposition] rejected de Mistura’s plan, which threatens the Syrian revolution."

Omar added, "We, as part of the FSA, will continue to defend our country until the demands for which the Syrian people took to the streets are met, because the revolution’s fundamentals cannot be waived or bargained away."

Omar's words reflect the need to find a political solution to the Syrian crisis that meets the aspirations of the Syrian people who revolted against the regime, guarantees that the new regime is different from the current one and prevents the return to power of those who participated in military and security operations that resulted in the death of more than half a million Syrians.

The last point was missing from de Mistura’s initiative. The opposition believes his initiative does not provide any guarantees for the future and does not clarify Assad’s fate, whose isolation is considered the first step in the revolution’s demands.

The SNC issued a statement saying, “The efforts made by the UN mediation since the Geneva 2 conference … were not built on clear foundations to ensure a peaceful transition of power and the establishment of a transitional governing body. It only gave partial solutions such as a temporary cease-fire, or holding consultative meetings, without serious and responsible action to stop the regime from targeting Syrian cities with rockets and explosive barrels.”

Suhair al-Atassi, a member of the coalition’s political committee, said in an interview with Al-Monitor in Istanbul that its support of the armed factions' statement is a "natural result of a new methodology pursued by the National Coalition for strategic participatory work between it and the fighting revolutionary factions."

Atassi added, "It is a first step toward the unity of the decision between the political and military aspect on the essential issues of the Syrian revolution, leading to a decision-making cell that would work on a joint action plan to achieve the revolution’s goals.”

The Syrian public's reaction also was very positive regarding the unprecedented consensus. Activists in Syria and in neighboring countries support it and see it as the first step toward unifying the ranks and forming a single political opposition body as an alternative to the current Syrian regime.

Independent media activist Sherif Sarmada from Idlib told Al-Monitor via Skype, “This is a positive step for cooperation between the coalition and factions. I believe that cooperation is very essential at the current stage, especially since the revolution needs a political aspect along with the military one, regardless of the negative aspects of the coalition and its members. But I think things are moving forward, toward more cooperation between the two sides.”

Atassi, who believes the international community’s reaction was positive and hopeful, also stressed that sentiment.

“Assad’s regime and its allies had always relied on the division between the political opposition and the FSA. I think that this statement — as well as the steps that will follow, such as workshops, plans and visions — will address Assad’s regime and its partners’ war crimes and crimes against humanity. The statement will also support the positions of friendly countries supporting the Syrian issue in the face of the dual Russian-Iranian occupation,” said Atassi.

After becoming closer to the factions, the political opposition now hopes to obtain public support and restore its legitimacy, a big part of which it lost in the Syrian street. Perhaps it can count on that support more than that of the foreign countries that used to support it, and then abandoned it. The political experience of the military factions and the coalition is now being put to the test by the diplomatic forces, especially since the Russian intervention in Syria in early October, which led to ongoing negotiations between international parties that will include the opposition formations.