Staffan de Mistura is the first UN special representative to the Syrian conflict to meet with Hezbollah officials to get the organization's assessment of the Syrian crisis. 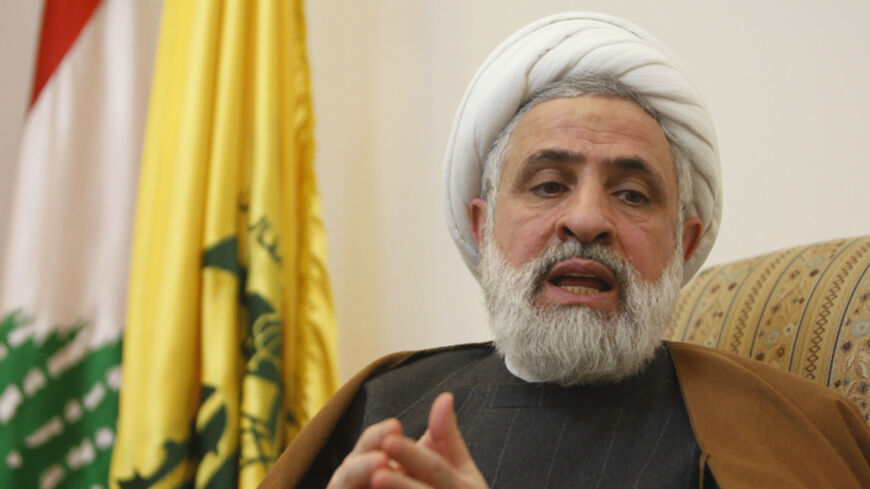 Sheikh Naim Qassem, Hezbollah deputy secretary-general, speaks during an interview with Reuters at his office in a Beirut suburb, Feb. 28, 2012. - REUTERS/Sharif Karim

Staffan de Mistura, special envoy of the UN secretary-general to resolve the Syrian conflict, visited Naim Qassem, deputy secretary-general of Hezbollah, Oct. 16 in Beirut. It is not the first time a Western or UN official has met with leading members of the Shiite organization despite the European Union designating the military wing a terrorist organization in July 2013. It is the first time, however, that a UN official directly involved with the Syrian crisis had requested and obtained a meeting with a prominent Hezbollah member to discuss developments in Syria, the causes behind the conflict and prospective outcomes.

De Mistura’s visit is unprecedented in that neither of his predecessors — Kofi Annan and Lakhdar Brahimi — made such a visit, even though Brahimi has known a number of Hezbollah members for more than two decades. In fact, Brahimi had served as a mediator between warring Lebanese parties in 1989. These acquaintances and friendships, however, did not lead Brahimi to go the extra mile to visit Hezbollah officials.

Hezbollah-affiliated details secured the transportation of the UN official to Qassem’s office, an unidentified address in one of Beirut’s southern suburbs. Sources close to Hezbollah confirmed this to Al-Monitor, perhaps signaling the trust and cooperation between both parties. It was noted that Wafik Safa, head of Hezbollah’s Central Liaison and Coordination Committee and coordinator of security-related communications between the party and the Lebanese authority, was also present to receive de Mistura, who was accompanied by Derek Plumbly, the UN secretary-general's special coordinator in Lebanon.

In regard to the meeting's content, the visit could be considered normal, given the continuous and fruitful cooperation between the two parties that began when de Mistura was the UN secretary-general's special coordinator in south Lebanon, between 2001 and 2004.

Some view the gesture of the visit as necessary. A statement by US Secretary of State John Kerry, during a quick visit to Beirut on June 4, paved the way for it. Kerry called on the parties supporting Syrian President Bashar al-Assad, namely, Russia and Hezbollah, to work together to bring an end to the war. The appointment of de Mistura as special envoy was announced July 10, five weeks after Kerry’s speech.

Sources close to Hezbollah revealed the most important part of the visit, telling Al-Monitor that Hezbollah was now sure that the West perceives it as part of the solution in Syria. That said, the West might at the same time also continue to see Hezbollah as part of the problem.

The same sources said that Hezbollah was impressed with the degree of respect the UN official showed during his visit with Qassem. De Mistura made sure to describe the purpose of the meeting as "listening" to Hezbollah's perspective on the Syria crisis. The content of the discussion, comments and queries showed, however, that de Mistura did not remain silent. He expressed opinions knowing that the message would be conveyed not only among Hezbollah, but also to Syrian officials, given the close ties Hezbollah enjoys with Syrian officials.

Qassem is said to have presented Hezbollah’s opinion vis-a-vis the Syrian crisis in detail. He comprehensively analyzed the crisis from its eruption to date, asserting that the phase of peaceful protests under the banner of constitutional demands was only a facade, aimed at leading Syria to the current state of terrorist violence, destruction and dismantlement of society and the state.

According to Qassem, Hezbollah believes that the only effective solution in Syria is through a political process that includes all parties. By this, Hezbollah means power sharing under Assad's leadership, because, it argues, such a process cannot be achieved without him or the regime over which he presides.

Qassem reiterated this position after the meeting in a statement for which Hezbollah distributed a transcript, stating, “The political solution saves Syria and its people. All parties should expect to make painful concessions in this regard. But this is the only available solution, and no other solution exists.” The “painful concessions” refer to the regime’s acknowledgment of the opposition as a partner in governing and acknowledgement by the opposition and those supporting it that the current regime is their partner in Syria.

The sources claimed that de Mistura had expressed opinions close to Hezbollah's in terms of a peaceful solution and political settlement, although the details differed. The meeting ended with agreement on the necessity of holding further discussions.

by Murielle KASPRZAK and Joseph SCHMID | AFP | May 26, 2022
END_OF_DOCUMENT_TOKEN_TO_BE_REPLACED