The heads of four nations gathered in Istanbul last week, all seeking to promote their countries' own national interests in Syria. But it's unclear if they'll eventually be able to negotiate a peaceful solution to the Syrian crisis that Damascus will accept. 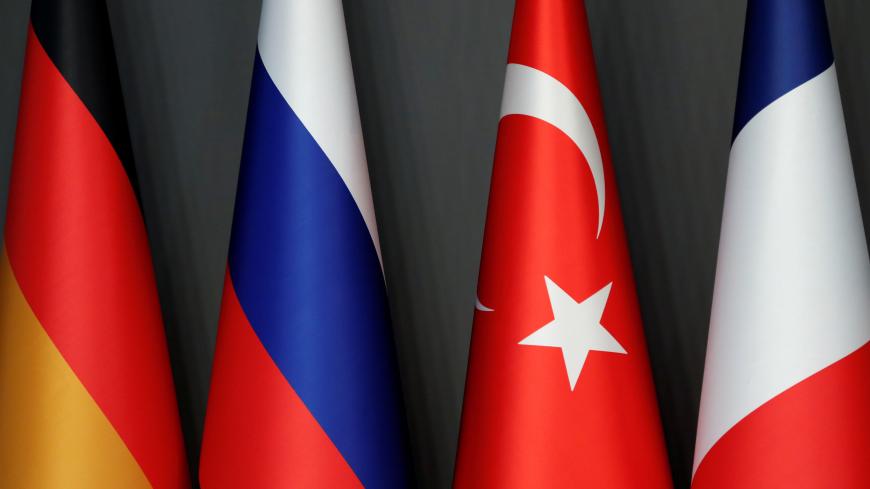 Leaders of Turkey, Russia, Germany and France agreed at an Oct. 27 summit in Istanbul that the key to peace in Syria lies with a UN-backed process. Syria, however, begs to differ.

Moscow and Ankara called the summit to bring together some members of two groups working separately toward solutions to the Syrian war: the so-called "small group," which includes France, Germany, Saudi Arabia, Britain and the United States; and the group led by the trio of Iran, Russia and Turkey that has been holding talks in Astana, Kazakhstan.

It was the first time the two groups had sat down together at the negotiating table, and it provided few reasons for optimism. Each country has its own interests in Syria and in broadening the group. Russia, a guarantor of an all-Syria cease-fire, seeks a return of refugees from Middle East countries to Syria (a nod toward Syrian President Bashar al-Assad's wishes) and foreign investments aimed at bolstering the regime. Turkey, a NATO member, would like to remove the financial burden of its involvement in the war and perhaps gain some support in its opposition to Assad. In such an arena, France and Germany pretend to be interested in the settlement, address the refugee return under Russia's terms and hope for the best.

The four-nation summit was preceded by bilateral contacts between all the attendees regarding Syria. On Oct. 25, French President Emmanuel Macron spoke by phone with his US counterpart, Donald Trump, who asked Macron to present their common vision on Syria at the Istanbul summit. Prior to his own travel to Turkey, Russian President Vladimir Putin spoke by phone with Macron, and shortly after arriving, Putin held bilateral meetings with Turkish President Recep Tayyip Erdogan and German Chancellor Angela Merkel.

In addition, Russia and Turkey held negotiations between their foreign and defense ministries, respectively, although no further details of these meetings were provided “due to restrictions on speaking to the media,” Turkey's Anadolu Agency news group reported.

It took the leaders of the four nations almost three hours to speak to each other away from prying eyes. Neither the subsequent press statement nor the joint communique spelled out any new agreements. Rather, both documents — in their usual manner — reiterated the parties' commitment to Syria’s territorial integrity and emphasized the necessity to resolve the conflict only through political and diplomatic means. Such pronouncements have invariably been part of various forums and conferences. However, given this was the first such meeting of the four, these principles will perhaps have more meaning.

Initially, the Turkish proposal was to come together as early as Sept. 7. Almost two weeks before Erdogan announced the date, a source related to the French government argued it would be "premature to hold talks at such a high level,” as Paris wanted intensive negotiations to guarantee a cease-fire and ward off Syria’s offensive against rebel-held Idlib. So instead, the presidents of Iran, Russia and Turkey met Sept. 7 online. Within 10 days, Erdogan's plan laid the foundation for a Russia-Turkey deal that was welcomed by the West and made it possible for the sides to then come together in Istanbul.

At the Istanbul summit, Macron labeled a military operation in Idlib unacceptable, saying it would trigger a new wave of refugees, which to some extent reinforced support for the Russia-Turkey agreement on the de-escalation zone. But even as the summit was taking place, there were media reports that pro-Syrian forces were violating the agreement by shelling the demilitarized zone south of Idlib, and Putin stressed that Moscow views the Idlib agreement as “temporary” and is ready to "provide effective support" for the Syrian army to eliminate the militant threat if Turkey is unable to get those groups to withdraw.

Although Putin's statement sounded like a warning, Moscow is unlikely to be looking for a pretext to start a military operation that could put it at loggerheads with Ankara. Moreover, such an operation could scuttle the initiative to engage European sponsors in restoring the Syrian infrastructure.

“However, should the negotiations with the West ultimately fail, Russia may resume its activity in Idlib to give impetus to backstage negotiations,” a source in the Russian armed forces told Al-Monitor on condition of anonymity.

The September arrival of Syrian Arab Army Brig. Gen. Suheil al-Hassan — who commands the Tiger Forces and is constantly guarded by Russian special forces — at the Abu al-Duhur Air Base in Idlib gave rise to speculation about an imminent start of operations west and south of the de-escalation zone.

However, some sources say the Tiger Forces see the Abu al-Duhur Air Base as their permanent base and the unit’s arrival doesn’t imply an operation.

Moreover, one should keep in mind Merkel’s statement that the Syrian reconciliation process should move forward under UN auspices and Erdogan’s call once again to form a committee to create a new Syrian Constitution by the end of the year.

The Constitutional Commission is to have 150 members, with 50 proposed by the Syrian regime, 50 by the opposition and 50 by the UN. However, Damascus rejects any role for the UN.

“The Syrian government has virtually plugged up its ears and dug in its heels. It opposes even concessions that could be dropped later, not to mention amendments to the constitution — even though the regime's opponents demand a new set of fundamental principles,” a source close to the Russian diplomatic corps told Al-Monitor.

“The situation with the [UN] list for the Constitutional Commission candidates — which should include representatives of civil society and experts and to which the government actually added Baathists — can be an illustrative case in the matter. The regime’s strong desire to transfer the entire negotiation process to Damascus by declaring it an internal affair and allowing only the 'acceptable' opposition representatives to join also causes concern,” the Russian source concluded.

Basically, that's what UN special envoy Staffan de Mistura said on the eve of the Istanbul summit as he was reporting to the Security Council on the results of his trip to Damascus and talks with Foreign Minister Walid Muallem, a prominent representative of the “conservative” wing in the Syrian regime.

“Walid Muallem didn’t accept a role for the UN in identifying or selecting a third list,” Mistura said.

The next day, speaking at the Istanbul press conference, Merkel addressed the subject of Syrian elections. "We need transparent elections that will be held under the supervision of international observers," she said, adding, “Refugees should take part in this process as well."

However, her words can hardly be regarded as evidence that Europe is ready to finance the refugees' return, which should be linked to the reconstruction process. Given the uncertainty around Idlib and the Kurdish territories, it's naive to assume that Europe will invest heavily in rebuilding the infrastructure of opposition-controlled areas.

Erdogan, in turn, called for providing more humanitarian aid to the Syrians, emphasizing Turkish efforts in this area, and also promoted expanding the Syrian settlement format to include European members. Ankara must be seeking to counterbalance the Astana trio's tandem of Russia and Iran, which, unlike Turkey, favor keeping Assad in power.

Russia, for its part, can play up the direct involvement in the settlement process of Germany and France: By agreeing to participate in such summits, they are recognizing Assad's Baathist regime as a legitimate ruler of Syria and aren't excluding the idea of a Baathist being elected in the future. Both sources Al-Monitor spoke with say the “small group” is set to approve the Constitutional Commission if Syria presents a balanced third list. However, given Damascus’ unwillingness to implement even cosmetic reforms and include a few opposition members on the commission, Europe can only wait for acceptable initiatives from the Kremlin and make a pretense of deliberating the issue.