Russia's frenzy of diplomatic and military activity around Syria in recent days suggests Moscow is pushing its own initiatives before a new UN envoy on Syria takes the reins and before Democrats take control of the House in the United States. 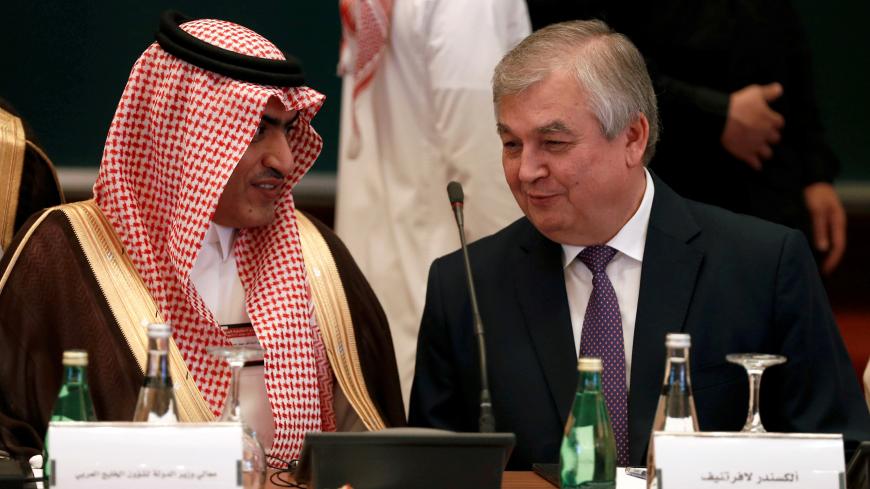 MOSCOW — Russia’s envoy for Syria Alexander Lavrentiev, accompanied by Deputy Foreign Minister Sergey Vershinin and senior officials from the Russian Defense Ministry, met in Damascus with Syrian President Bashar al-Assad on Nov. 6. The Russian Foreign Ministry reported there was a “comprehensive exchange of views” on the current situation in Syria. The focus was the Russian-Turkish memorandum on Idlib signed in Sochi on Sept. 17; the formation of the Constitutional Committee; Syria’s post-war restoration; and the creation of conditions for the return of refugees. The Russians also briefed Syria on the results of the Oct. 27 meeting in Istanbul between the presidents of Turkey, Russia, Germany and France.

The Russian emissaries arrived in Syria from Tehran, where they were hosted by the secretary of Iran’s Supreme National Security Council, Ali Shamkhani. The Russian envoy and Shamkhani discussed political resolutions to the Syrian conflict. Shamkhani praised the trilateral cooperation between Russia, Iran and Syria, stressing it had become “a leading factor in giving the upper hand to the Syrian army against terrorism.”

The agenda the Russians discussed in Tehran and Damascus is fully reflective of the directions Moscow is currently prioritizing in Syria.

First, as the Syria settlement awaits a new UN envoy — Norwegian diplomat Geir Pedersen, who is currently his country's ambassador to China — Russia is making sure its own initiatives are well sealed and recognized by other major regional players before UN Syria envoy Staffan de Mistura steps down at the end of November. Russia is thus pressing Assad to speed up the formation of the Constitutional Committee — part of the mission of the high-level delegation in Damascus. Meanwhile, in Moscow, Deputy Foreign Ministers Mikhail Bogdanov and Sergey Ryabkov have engaged in a frenzy of diplomatic activity, meeting with ambassadors of virtually all Middle Eastern countries over the last four days. In one day, Bogdanov hosted Saudi Ambassador to Russia Raed bin Khaled Qarmali and Syrian Ambassador Riyad Haddad, whereas Ryabkov met with Iranian Ambassador Mehdi Sanaei. The next day, Bogdanov discussed Syria and Gulf affairs with UAE Foreign Minister Anwar Gargash.

Second, Vladimir Putin’s embrace of the four-party talks with Turkish President Recep Tayyip Erdogan, French President Emmanuel Macron and German Chancellor Angela Merkel made many in Moscow believe that Russia now seeks to merge the two formats of the Astana group and the two leading European nations from the so-called small group. Russia has been skeptical of the group formed earlier this year by the United States, the United Kingdom, France, Germany, Saudi Arabia, Egypt and Jordan, believing the group was arranged primarily to torpedo the efforts of the Astana trio (Russia, Turkey and Iran). Now that any meaningful progress within the small group is stalled — from Russia's perspective — with its participants seeking other venues to strengthen their own positions in the Syrian political settlement, and the United States lacking any clear set of objectives that could genuinely unite other members, Moscow believes the conditions are ripe to engage the Europeans who are open to such engagement, albeit each for their own reasons.

“The West seeks to drive wedges at every possible level between us and Tehran and Turkey,” the Russian diplomat argued.

“This arrangement [the small group] was created to disrupt our own activities, to intercept the political agenda," a senior Russian diplomat working on the Middle East told Al-Monitor, speaking not for attribution. "But they neither had a constructive agenda themselves nor significant influence on the ground [in Syria] to be able to push their decisions on us. It’s OK, they needed almost a year to understand it. Now all but the United States and the UK come around to work with us, we are open.”

Although Iran is absent from the Istanbul quartet, Russia sees it as an important puzzle piece for a Syria settlement and thus briefs both Tehran and Damascus on the consultations within the group, which Moscow, too, considers to be a step into linking the Astana format with the Istanbul group. The Astana trio was critical in shifting the balance of forces in Assad’s favor, but now that the conflict has moved to the political realm, a broader coalition with Europeans is needed, both for the sake of the process' legitimacy and for financial reasons. German companies are eyeing possible contracts in Syria’s restoration, partially helping to alleviate Russia’s own concerns for finding the money for reconstruction.

“The West seeks to drive wedges at every possible level between us and Tehran and Turkey,” the Russian diplomat argued.

“They take every opportunity at any venue to speculate about 'bitter differences' we have with Iranians in Syria. We do have some disagreements, of course, we know them very well, Iranians do too, they are not easy counter-partners and I’m sure they think of us the same way. But over the course of the years we are in Syria we’ve learned to work these differences in a mutually acceptable way and we both know there are many out there who seek to derail it, seeing our joint successes in Syria,” he said.

“The vessel will be acting in the standing naval force of the Russian fleet in the Mediterranean,” read the Russian Defense Ministry statement.

It’s not clear whether the move will have an immediate operational effect, but in the past, Russia fired this type of missile from Mediterranean-based submarines and frigates stationed to support Syrian army offensives against militants. Earlier in May, President Putin stated that cruise-missile-carrying vessels would be on permanent standby in Mediterranean waters to counter “the terrorist threat in Syria,” so the move may be meant as a general deterrent against a potential foreign strike.

The results of the US midterm elections that flipped the House of Representatives to the Democrats have been largely interpreted in Russia as having a negative effect for the state of affairs with Washington. Moscow deems the possibility of new sanctions coming from Congress as high and expects more checks on the Donald Trump administration's dealings with the Kremlin, including in areas that could have been explored for cooperation, such as Syria. Putin and Trump are set to meet Nov. 11 on the margins of the Paris event commemorating the centenary of the end of WWI, but the hopes that the meetings can bear constructive practical outcomes are more modest today than they were before the encounters the two presidents had in Germany, Vietnam and the summit in Finland. Hence, for now, Moscow believes that staying its own course is a more reasonable path in this regard.