The summit in Tehran exposed important underlying dynamics within the Astana trio and made it clear the three actors see the US presence as a problem, albeit each for their own reason. 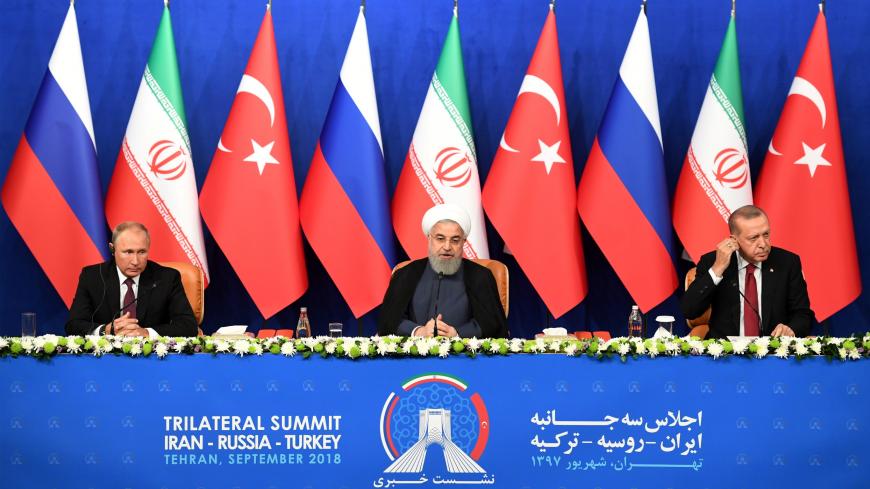 MOSCOW — A new round of escalations over Idlib made the summit in Tehran all the more important. In the run-up to the event, expectations in Iran, Russia and Turkey were modest but optimistic. The third meeting between the three leaders was seen as a critical step in ending the war in Syria.

“I think the situation from a military point of view will become clearer after, among other things, the leaders of the three guarantor states hold talks,” Sergei Ryabkov, Russia’s deputy foreign minister, told a news conference ahead of the summit.

“The summit … is a great opportunity for a solution in Syria,” Russia’s Ambassador to Turkey Aleksei Erkhov added.

“We will take the situation to a positive point at this summit. ... God willing, we will be able to hinder the Syrian government’s extremism in the region. In a situation like this, where will the fleeing people go to? A large proportion of them will come to Turkey,” Turkish President Recep Tayyip Erdogan told reporters days before he left for Iran.

The issue is indeed of immense importance to Turkey, and both Russia and Tehran had to take into account the distinct assets and higher stakes Ankara has this time compared with other instances when Assad moved to swipe opposition-held territories. The parties in Tehran didn’t reach the full deal they initially hoped for — another summit will now take place in Russia — but all three have a reason to feel their bottom-line security interests can be duly addressed.

Turkey maintained credibility with the opposition by emerging as a “good cop” to Russia’s “bad cop” in the exchange between Erdogan and Russian President Vladimir Putin. Ankara also received time to settle the major task of sorting out moderate militants from radical ones. Putin got his own promise from Erdogan to deal with those attacking Russia’s Hmeimim base. Iran’s low-profile wait-and-see stance will benefit Tehran, as it has in the past.

While such a state of play provides hope than an Aleppo-style offensive can be averted for now, the Russian and Syrian air forces will continue to pound opposition and terrorist positions “on the margins” of Idlib to keep Erdogan on his toes and will be a nagging reminder that the time he received isn’t infinite.

As far as the relations between Russia, Turkey and Iran are concerned, three takeaways from the summit are particularly important.

First, the live-streamed summit discussions between the three presidents showed that disagreements within the Astana trio persist. This is barely news since they have long been admitted and voiced at different levels and the televised dispute is just a tip of the iceberg in this sense. Still, the language and posture of the three leaders help provide an understanding of the complexity of the personal chemistry between the three, their leadership styles and the lengths to which each has to come to promote his country’s interests within this “alliance.”

Second, despite the differences, Moscow, Ankara and Tehran continue to value the Astana format as a setting that, in the absence of a better mechanism, helps them promote their own agenda and coordinate efforts in moving the course of action in Syria.

“Up until now we’ve come a long way in the Syrian settlement. … Our region can live in peace, but without threats, without occupation, without militarism or ethnic and religious discrimination. Cooperation of [our] three countries on the Syrian issue can be a reliable ground for peace in Syria and long-term interaction in regional and global levels,” he added.

Putin, stressing the importance of the Astana engagement, said, “Previous decisions within the Astana format are being successfully implemented. … The pest-hole of international terrorism has been almost liquidated. Ninety-five percent of the Syrian territory and 141 towns have been freed. … Conditions have been prepared for Syrians to decide the future of their country for themselves. … Thanks to the meticulous work by Russia, Iran and Turkey, some impressive results have been achieved in Syria.

Erdogan said, “We know that within the Astana meetings our interests have converged on major directions. … With this in mind and with lives and blood of our soldiers in Jarablus, al-Bab and Afrin we cleaned the territory of terrorists. Syrian lands have been provided with peace and calm and by this we sought to create conditions for return of refugees.”

Even as Erdogan alluded to Ankara’s potential derailment of the Astana format over Turkish disappointment that its partners have been unable to deliver on Turkey’s interests in Idlib, Russia and Iran showed no signs of backing down on their strategic intent for Damascus to ultimately retake control of the entire province.

“We have to solve this [Idlib] issue with the understanding that the legitimate Syrian government has the right and will eventually have to ensure control over its full territory,” Putin said.

In this context, the Russian and Iranian resolve to counter opposition groups is as strong as before, with both seeing it in line with multilateral agreements aimed at stamping out violent militant groups. A small but significant difference appears to be that Moscow would still give those willing to reconcile a chance.

But while concessions don’t come easy for Russia, Iran and Turkey, the logic that continues to glue together the three ambitious presidents is one based on pragmatic — some would argue cynical — calculations that each need the other two at this very moment. While the alliance is ad hoc, the principles of its functioning have remained intact despite major crises. The Idlib challenge doesn’t erode the relationship by itself, but is yet another stress test the three need to pass to continue bearing the fruit of the trilateral cooperation.

Third, the US presence remains a problem for all three actors. In Syria, America has come to be seen as the threat to Iran, the spoiler for Russia and an irritant for Turkey.

“No positive role on the Syrian issue can be expected [from the United States]. Their barbarian and illegal interference in Syria contradicts every international rule, their presence only deteriorates and complicates peacemaking efforts in Syria,” Rouhani said.

Ironically, while opposing any role for the United States in the conflict, Iranians fear Moscow will eventually bargain the little leverage it has over Tehran for a deal with Washington, while Russians are more preoccupied with Ankara’s own continued overtures to its NATO partner. In Tehran, however, Erdogan was sharp in his criticism of the United States.

“As the world keeps its eyes on Idlib … under a pretext of fighting Daesh [the Islamic State], some foreign forces have directed their troops into a different direction. We are incredibly concerned with the US continuing to support a terrorist organization. Although Daesh is no longer posing a threat, America sent several thousand of planes with arms. This is illustrative of how they 'support' the region,” Erdogan said.

Putin steered clear of mentioning the American factor in any way during his opening remarks, only speaking of possible provocations by militants involving use of chemicals, which the Russian Defense Ministry has propagated as inspired by “some Western states.”

Yet it is between Russia and the United States that the situation is creeping to new confrontational levels. In the last week, Russian military has twice warned the United States of an intent to attack the al-Tanf area where Moscow has long claimed American troops are protecting militants. In response, the United States ordered snap military exercise in southern Syria near the Jordanian and Iraqi borders.

Earlier, US Defense Secretary Jim Mattis dismissed Russian assertions over a coming provocation involving the use of chemicals, saying Washington has “zero intelligence that shows the opposition has any chemical capability.” The United States has warned Syria against the use of chemical weapons in Idlib.

On Sep. 8, the Russian Defense Ministry reported that there had been a meeting between leaders of Hayat Tahrir al-Sham, Hizb ut-Tahrir (Turkistan Islamic Party) and the White Helmets. According to the ministry, “Scenarios for staging and filming of incidents with the alleged use of chemical agents by the Syrian government forces against civilians” were discussed.

“A special team of some "foreign friends of the Syrian revolution" will give a signal for the start of the provocation in Idlib province,” the ministry warned on Twitter.

So even if Moscow and Washington have yet again opted for the tactics of what is often called “escalation for the sake of de-escalation,” neither party seems to be deterred by respective moves of the other, which is a worrying trend amid rising tensions.