Al-Qaeda, foreign fighters have nowhere to go from Idlib 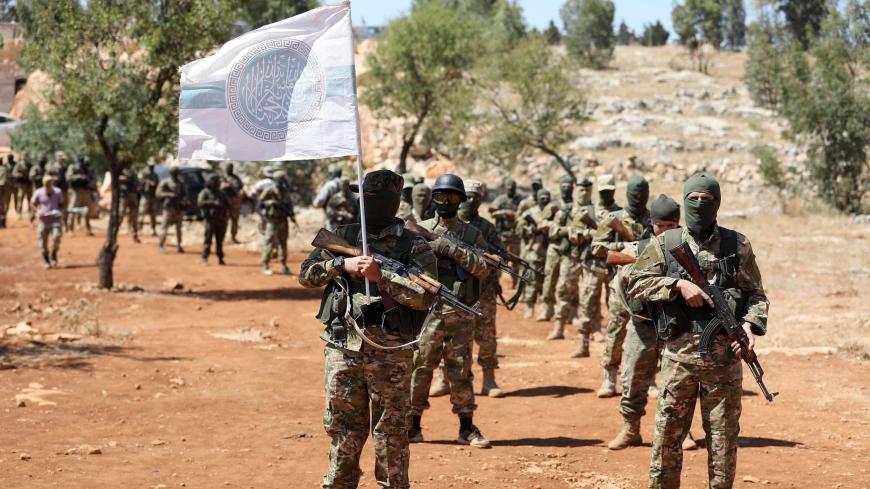 Syrian fighters attend a mock battle in anticipation of an attack by the regime on Idlib province and the surrounding countryside, during a graduation of new Hayat Tahrir al-Sham members at a camp in the countryside of Idlib province, Aug. 14, 2018. - GETTY/Omar Haj Kadour

A UN official warned this week that an all-out military assault on Idlib, which has nearly 3 million residents, risked the potential for the worst humanitarian conflict “in the 21st century.”

Idlib also presents a terrorist threat comparable to Raqqa or Mosul, the previous strongholds of Islamic State in Syria and Iraq. The al-Qaeda linked Hayat Tahrir Al-Sham controls 60% of Idlib province and has as many as 10,000 fighters; there also are other jihadi groups and armed gangs there.

Turkish President Recep Tayyip Erdogan, in a Sept. 10 op-ed in the Wall Street Journal, argued against an attack on Idlib, instead arguing for a more “comprehensive international counterterrorism operation” involving “moderate rebels” who have played a crucial role in “Turkey’s fight against terrorists in Northern Syria.”

Unfortunately, neither Erdogan nor the “moderate rebels” call the shots in Idlib. As we reported here last week, given the international community’s efforts to prevent an attack, Hayat Tahrir al-Sham and the other armed Salafi groups and foreign fighters in Idlib have no incentive to cooperate. No country will take them, so in the end, they have nowhere to go. They face their last stand in Idlib and thereby benefit from the current reprieve. The people of Idlib, in the meantime, face continued misery under the harsh rule of Hayat Tahrir al-Sham and other Salafi groups and armed gangs, who consider civilians to be human shields and prevent their departure. The militant groups have jailed and executed so-called collaborators who would otherwise be inclined to take up Erdogan’s offer.

Since last week’s column, in what might be connected to the American remembrance of the victims of the Sept. 11, 2001, al-Qaeda attacks on the United States, several prominent voices on both the left and right have questioned why the United States might risk a confrontation with Russia over a terrorist enclave in northwest Syria. Tucker Carlson on Fox News asked why the United States should be involved in Syria “at all … to protect al-Qaeda sympathizers.” Rep. Tulsi Gabbard, D-Hawaii, tweeted that by threatening to use force against Syria and Russia, the United States was “simultaneously acting as protectors of AQ in Syria/Idlib.” Sen. Rand Paul, R-Ky., tweeted, “Let's not turn Syria into another perpetual war like Afghanistan and Iraq.”

Erdogan’s outreach, and the US signal that it would respond with force to the use of chemical weapons, seems to have put an all-out assault on hold, at least for now, and perhaps in anticipation of a final diplomatic flurry around the UN General Assembly meetings that convene in New York on Sept. 18.

“The consensus among Western sources who closely follow the seven-year Syrian conflict is that Ankara’s goal is not to ignite a new rearguard battle from its borders over the last rebel stronghold. It is rather to convince the regime that it is ready to do so, to deter the latter from launching an all-out assault on Idlib,” reports Amberin Zaman.

“Turkish officials believe there’s a chance to bring the Trump administration around, arguing among other things that renewed support for the rebels would hem in the influence of pro-Iranian militias as well. And it's entirely conceivable that some administration officials may be encouraging such thoughts if only to drive a wedge between Ankara and Moscow, much in the same way Moscow has sown divisions between Ankara and Washington by supporting Turkish moves against US-backed Syrian Kurds in Afrin,” adds Zaman.

Maxim Suchkov writes that the differences among the Astana parties — Russia, Turkey, and Iran — “is barely news since they have long been admitted and voiced at different levels. ... Still, the language and posture of the three leaders help provide an understanding of the complexity of the personal chemistry between the three, their leadership styles and the lengths to which each has to come to promote his country’s interests within this 'alliance.'”

Suchkov adds, “Despite the differences, Moscow, Ankara and Tehran continue to value the Astana format as a setting that, in the absence of a better mechanism, helps them promote their own agenda and coordinate efforts in moving the course of action in Syria. But while concessions don’t come easy for Russia, Iran and Turkey, the logic that continues to glue together the three ambitious presidents is one based on pragmatic — some would argue cynical — calculations that each need the other two at this very moment. While the alliance is ad hoc, the principles of its functioning have remained intact despite major crises. The Idlib challenge doesn’t erode the relationship by itself, but is yet another stress test the three need to pass to continue bearing the fruit of the trilateral cooperation.”

One reason the alliance continues to hold, according to Suchkov, is that “the US presence remains a problem for all three actors. In Syria, America has come to be seen as the threat to Iran, the spoiler for Russia and an irritant for Turkey.”

Erdogan, referring to US backing of the Syrian Democratic Forces, which is composed primarily of the Kurdish People’s Protection Units, said, “We are incredibly concerned with the US continuing to support a terrorist organization. Although Daesh [the Islamic State] is no longer posing a threat, America sent several thousand of planes with arms. This is illustrative of how they 'support' the region.”

Both the United States and Russia seek to defeat and destroy Hayat Tahrir al-Sham, al-Qaeda affiliates and foreign fighters; prevent a catastrophic humanitarian crisis that would impose a heavy burden on Turkey, Russia’s Astana partner; deter chemical weapons use; and prevent an inadvertent military escalation. These should be more than enough for a start on a comprehensive solution that leverages the authority of the UN Security Council. That al-Qaeda and their like would benefit, and the people of Idlib suffer even more, because the United States and Russia can’t agree on these seemingly self-evident shared interests seems to us an avoidable tragedy.

Al-Monitor has posted the latest annual update of its lobbying series, which received the Online Journalism Award for Explanatory Reporting. The series summarizes hundreds of lobbying and financial records to bring you the most comprehensive resource available on Middle East lobbying in Washington, including weapons contracts, foreign aid, trade deals and financial sanctions, as well as updates on the latest lobbying contracts and registrations. The series also measures impact with an account of lobbying wins and losses through careful analysis of congressional action and State Department and Pentagon budgets.

You can access all of the current data as well as past years’ series, as well as access to Al-Monitor archives, over 20,000 stories in all, by registering here.