"Numerous instances" of diversion reported by US watchdog agency; US sanctions between Iraq and a hard place. 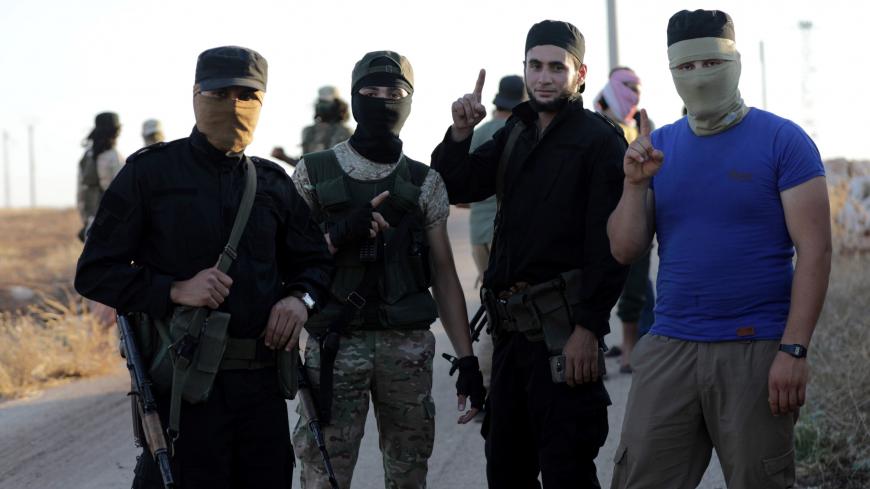 The Office of the Inspector General of the US Agency for International Development (USAID) has “uncovered numerous instances of possible or confirmed diversions to armed groups" in Idlib province in northwestern Syria, including to Hayat Tahrir al‐Sham, which is a designated foreign terrorist organization.

The explosive USAID report released Nov. 14 oddly holds back on naming the cross-border implementers implicated in these numerous diversions. Turkey houses many of the nongovernmental organizations operating in northern Syria. Delivering aid to besieged populations in conflict zones at times requires compromises among warring parties, the use of local intermediaries, and therefore the increased risk and potential for misdirection of funds. USAID ceased use of the Bab al-Hawa border crossing in September because of the tax imposed by Hayat Tahrir al‐Sham on aid convoys.

Khaled al-Khateb reports from the Morek crossing in rural Hama, south of Idlib province, that “the Morek City Council is in charge of that side of the crossing and Hayat Tahrir al-Sham (HTS) — a coalition of Islamist factions — provides protection. The Russian military police, in cooperation with the regime’s customs police, supervises administration of the regime’s side.” The Syrian government closed the crossing again Nov. 17.

The UN estimates that there are 10,000 al-Qaeda linked terrorists in Idlib, intermingled with perhaps tens of thousand more Salafists who are holding 60% of Idlib province hostage, compared with what the US Department of Defense estimates are 14,000 Islamic State fighters remaining in Syria. Fehim Tastekin, based on field reporting, estimates that Hayat Tahrir al-Sham controls two-thirds of Idlib province and has some 15,000 fighters under arms.

Ankara sponsors of the National Liberation Front, a coalition of armed groups in Idlib province. The National Liberation Front’s membership includes two extremist groups, Ahrar al-Sham and Nour al-Din al-Zenki, which have been on-again, off-again partners with Hayat Tahrir al-Sham. Tastekin suggests the size of the disparate forces in Syria under Turkish direction as between 85,000-100,000 fighters.

The rightful goal of avoiding a massive humanitarian tragedy in Idlib should not obscure the urgency of dealing with Hayat Tahrir al-Sham, and the need to liberate the people living under its brutal so-called “Islamic” rule. Turkey’s position is untenable, as we wrote here, and its ragtag army of jihadis, foreign fighters and hired guns would hardly be considered a “liberation” force by Syrians, whatever the spin from Ankara and elsewhere. As we wrote two months ago, “both the United States and Russia seek to defeat and destroy Hayat Tahrir al-Sham, al-Qaeda affiliates and foreign fighters; prevent a catastrophic humanitarian crisis that would impose a heavy burden on Turkey, Russia’s Astana partner; deter chemical weapons use; and prevent an inadvertent military escalation. These should be more than enough for a start on a comprehensive solution that leverages the authority of the UN Security Council. That al-Qaeda and their like would benefit, and the people of Idlib suffer even more, because the United States and Russia can’t agree on these seemingly self-evident shared interests seems to us an avoidable tragedy.”

US sanctions: between Iraq and a hard place

Washington cheered the selections of Barham Salih and Adel Abdul Mahdi as president and prime minister of Iraq. And then, before the new Iraqi government was even fully formed, the Trump administration made their lives impossible by designating Iraq as a front-line battlefield for the American campaign of pressure on Iran.

“Iraq does not wish to become part of a struggle to which it is not party,” said Abdul Mahdi.

“It is not an exaggeration to say that Iran-Iraq relations present the most significant regional axis in West Asia,” writes Bijan Khajehpour. “One should always keep in mind that the two states fought an eight-year war in the 1980s under Saddam Hussein, but have managed to establish a unique relationship including expanding economic relations. In fact, in the first seven months of the current Iranian year (March 21-October 22, 2018), Iraq was the most important export market for non-crude Iranian exports with close to $6 billion of exports.”

Salih has been on a regional tour, including visits to Iran and Saudi Arabia, to cultivate an atmosphere of goodwill for Iraq, to develop options and alternatives for Iraq’s trade and energy ties and to buy time, given the risk potential of American demands for destabilizing Iraq.

Salih’s visit to Iran “was another reminder of the nature of this relationship and its significance for Iran,” adds Khajehpour. “The two sides agreed to elevate annual trade volume from the current $12 billion to $20 billion, which would be a major boost — especially if it includes a major growth in Iranian exports to Iraq. The question is what opportunities and obstacles are in store for the planned expansion of trade relations.”

The United States wants Iraq to sever its energy ties with Iran. Toward that end, it has granted Baghdad a 45-day waiver to end natural gas imports, although no one expects that timeline will be adequate for the massive economic and energy restructuring required to do so, if that is even possible. Washington is pressing Iraq to accelerate its efforts and negotiations with American energy companies to wean Iraq off Iranian energy. One such offer includes a floating liquefied natural gas facility, according to The Wall Street Journal; this has generated little enthusiasm in Baghdad.

“There are limited alternatives to Iran’s current exports to Iraq due to missing infrastructure,” continues Khajehpour. “Evidently, in the longer run, Iraq could find substitutes, but the question is whether Baghdad would risk the deepening ties with Tehran in order to appease Washington. It will be a difficult balancing act as Baghdad needs both powers, but it is safe to expect that Baghdad will look for ways not to undermine the close ties with Tehran. Interestingly, Russian representative at the UN Security Council Vasily Nebenzya has supported Iraq’s decision to continue trading with Iran. He was quoted as saying that Iraq is recovering and Moscow supports a positive Baghdad approach to ensure its security and improve its economy.”

Massive protests in Basra linked to inadequate energy availability further constrains Baghdad’s options. “As Basra citizens continue to feel marginalized, despite the financial resources their province offers the Iraqi state, the likelihood of renewed protests and even unrest remain high,” writes Hamdi Malik. “Renewed protests might persuade more Basra citizens to call for a federal region as a solution to end the tragic situation of their province.”

“The areas of developing win-win scenarios are not limited to Iranian electricity and natural gas exports. There are also a large number of shared oil fields that are being developed,” reports Khajehpour. “This platform may also be an opportunity for the Iranian side to inject some of the latest technologies into the development of Iran’s oil sector by studying how international companies are managing the Iraqi side of the joint fields. There is also Iran’s role in ongoing oil and petroleum product swaps involving a triangle of Iraq, Iran and Iraqi Kurdistan. The two sides have furthermore signed an agreement to allow Iranian companies to assist Iraqi contractors in the field of expanding the capacity of liquefied petroleum gas (LPG) production in Iraq, especially as LPG will play a growing role in the transportation sector and residential energy consumption in the country.”

“Another important utility of the close ties to Iraq will be the opportunity for Iranian companies to use their subsidiaries in Iraq as a front to secure the products and services that may not be available to Iran directly. … How US sanctions enforcers will try to undercut such paths remains to be seen, but establishing front companies in neighboring jurisdictions is an important lever in Iran’s attempts not to allow the United States to undermine the country’s economic and technological development. The two sides are also planning to create a joint bank that will facilitate payments and transactions between the two economies in the face of increased US pressure on international banks. Another idea that has been promoted in bilateral relations has included the establishment of an “industrial complex” in one of the border regions that could house joint ventures and help the private sectors of the two nations to cooperate and develop solutions needed in the region.”