Can Erdogan intimidate Assad into backing off Idlib?

Turkish President Recep Tayyip Erdogan has vowed not to "watch from the sidelines" amid news of increased arms supplies flowing from Turkey to Syrian opposition rebels. 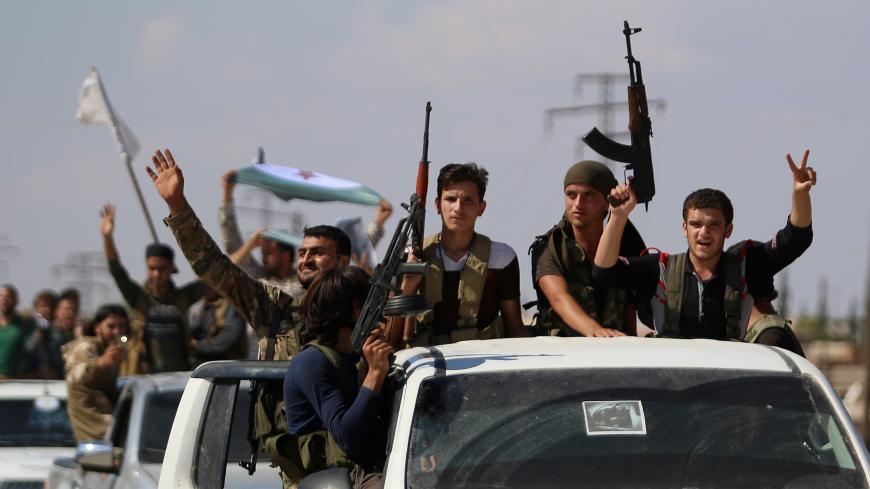 Turkey has reportedly increased arms supplies to Syrian opposition rebels to fend off an imminent offensive by regime forces in the province of Idlib, a move that will likely escalate tensions between Ankara and Moscow.

Turkish officials have yet to comment on the claims.

But the consensus among Western sources who closely follow the seven-year Syrian conflict is that Ankara’s goal is not to ignite a new rearguard battle from its borders over the last rebel stronghold. It is rather to convince the regime that it is ready to do so, to deter the latter from launching an all-out assault on Idlib. “They want to intimidate [the regime],” said one of the sources on condition of anonymity.

The report appeared to contradict comments from Russia’s special envoy, Alexander Lavrientev, who is in Geneva to hold talks with the UN’s Syria envoy, Staffan de Mistura. Lavrientev told reporters after the meeting, “We are saying the situation in Idlib should be settled, most preferably in a peaceful way. It is possible to abstain from military force.” The remarks prompted speculation that Russia had struck a deal with Turkey, allowing Ankara more time to persuade as many militants as possible to defect from the al-Qaeda-linked Hayat Tahrir al Sham, which is the dominant force in Idlib.

Lavrientev confirmed that in Moscow’s view, the ball is in Turkey’s court: “Idlib province is … a sort of zone of responsibility of Turkey; it is their responsibility to separate the moderate opposition from the extremists, Jabhat al-Nusra and other groups, other terrorist groups,” he said.

Turkey has been trying to woo away as many of the militants and their families as it can to join rebel groups in Afrin and the Euphrates Shield zone that remain under Turkish control. Turkey’s President Recep Tayyip Erdogan has repeatedly warned of a bloodbath should its appeals for time be ignored. He has also made clear that Turkey, already home to over 3.5 million Syrian refugees, cannot take in hundreds of thousands more Syrians who would likely head for the Turkish border in the event of a regime onslaught.

Erdogan vowed via Twitter, "If the world turns a blind eye to the killing of tens of thousands of innocent people to further the regime's interests, we will neither watch from the sidelines nor participate in such a game."

But Russia, which controls the skies over the area, has grown increasingly impatient as Turkey’s efforts to coax and bully the militants into surrender have largely failed thus far. A deal that would give Turkey further respite seems unlikely. Kerim Has, a Moscow-based academic specializing in Russia and Eurasia, told Al-Monitor, "Russia is in a hurry to get Idlib out of the way and to focus on drawing Europe into helping finance the reconstruction of Syria." The lurking suspicion, at least in the regime and Tehran’s minds, is that Turkey may be playing a double game to buy time to convince the United States to resume support for the rebels so as to crank up pressure on Syrian President Bashar al-Assad to step down.

As ever, Washington appears to be sending mixed signals to Ankara over Syria. The Donald Trump Administration has said it wants pull out of northeast Syria, where it is in the last stages of its campaign against the Islamic State, by the end of this year. It now says it will stay to finish off the Islamic State and to ensure Iran’s departure. The shift was confirmed by the administration’s newly minted Syria envoy, Jim Jeffrey, who told the Washington Post, “We are not in a hurry to withdraw. I am confident the president is on board with this.”

This may explain why Turkish officials believe there’s a chance to bring the Trump administration around, arguing among other things that renewed support for the rebels would hem in the influence of pro-Iranian militias as well. And it's entirely conceivable that some administration officials may be encouraging such thoughts if only to drive a wedge between Ankara and Moscow, much in the same way Moscow has sown divisions between Ankara and Washington by supporting Turkish moves against US-backed Syrian Kurds in Afrin.

Yet, Washington’s threats of military action against the regime so far remain exclusively linked to the use of chemical weapons in Idlib. Secretary of Defense Jim Mattis renewed warnings of a strike on Sept. 11. “In Idlib, we’re watching very closely what the Assad regime, aided and abetted by the Iranians and Russians, are up to there,” Mattis told Pentagon reporters. “The first time around, he lost 17% of his pointy-nosed air force airplanes,” Mattis said in a reference to the Russian-made Syrian air force jets that were destroyed in a US missile strike on a Syrian air base in April 2017.

The attack was carried out in response to an alleged chemical attack by Syrian regime forces in Idlib.

Washington's hawkishness may have less to do with humanitarian concerns, noted Has, given what he called its "silence" over the plight of ordinary Syrians until now. Rather, "The US strategy is to disrupt Russian plans in Syria, and by appearing to side with Turkey [on Idlib] to torpedo Turkish-Russian rapprochement," Has said.