Despite the usual bluster in his traditional Ramadan address, Turkey's president said not a word about the destruction in Syria's Idlib, where Ankara's balance is wobbling. 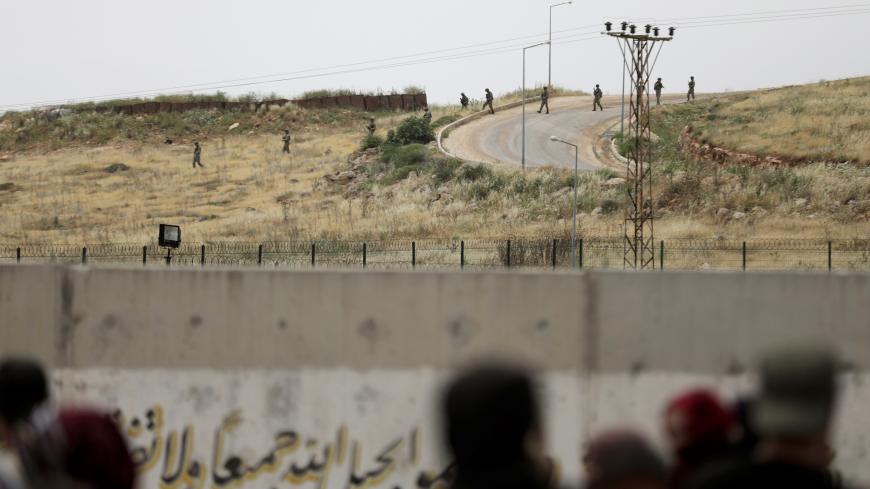 Turkish soldiers walk at the Atmeh crossing on the Syrian-Turkish border seen from the Syrian side, in Idlib governorate, Syria, May 31, 2019. - REUTERS/Khalil Ashawi

Today is the last day before the end of the Ramadan fast according to the lunar calendar, for those observing it in Turkey. In keeping with the significance of “Arife,” Turkish President Recep Tayyip Erdogan addressed the nation in a televised speech. As expected, he railed at outside forces bent on destroying Turkey and vowed they would not be allowed to succeed. Unusually, as the self-styled champion of Syria’s Sunni Arabs, a worn and deflated-looking Erdogan did not utter a peep about the regime violence unfolding in the rebel-held province of Idlib.

The latest Russian-backed regime offensive against Idlib is seen as the biggest escalation of the war since last summer — and a failure of Ankara’s efforts to put it off.

Analysts say Ankara’s balancing act, inserting itself as a buffer between the rebels, the regime and Russia, formalized under a deal struck in September between Erdogan and Russia’s President Vladimir Putin in Sochi may finally be unraveling. Under its terms, Turkey was supposed to diminish the influence of Hayat Tahrir Al-Sham, an extremist militant group that continues to pose the biggest threat to the government of Syrian President Bashar al-Assad. Instead, the jihadis who claim to have broken off their links with their al-Qaeda mentors have since January tightened their grip across Idlib and in northern Hama.

On Friday, the Kremlin pointed the finger of blame squarely at Ankara, saying it was its responsibility to prevent the rebels from firing at civilians and Russian targets. The statement followed Erdogan’s call for a cease-fire the night before in a telephone conversation with Putin.

Today, Kremlin spokesman Dmitry Peskov made clear that Russia had no such plans. “It goes without saying that bombardments by terrorists from Idlib are unacceptable and measures are being taken for neutralizing their emplacements.”

Peskov added, “Russia maintains cooperation with Turkey, which is responsible for preventing such attacks.”

Marc Pierini, a visiting scholar at Carnegie Europe and a former EU ambassador to Syria and Turkey, believes Ankara faced mission impossible in Idlib. “From the outset, the Sochi agreement was a political trap for Ankara,” Pierini told Al-Monitor. “It was clear that Moscow wanted the remaining jihadists ‘eliminated’ and that Ankara would not do that.”

This resistance triggered Moscow’s ire and with it the long-delayed Idlib assault. It did not help, noted Fabrice Balanche, a veteran expert on Syria at France’s Lyon II university, that in Russian eyes Erdogan “did not work hard enough to get US troops out of northeastern Syria” allowing the regime and the Russians to step in. Instead, Balanche told Al-Monitor, “The Turks are trying to get their own troops into northeastern Syria in a deal with the United States.” Balanche was referring to US plans for a safe zone in the Kurdish-controlled area that have yet to materialize.

Indeed, Turkish officials who worry about their country’s perceived drift away from NATO into Russia’s orbit may view the collapse of the Sochi agreement as an off ramp for Ankara’s controversial deal to purchase Russian S-400 missiles, an issue that has pushed Turkish-US relations to the brink. Washington has reportedly given Ankara a mid-June deadline to scrap the deal before a menu of proposed sanctions kick in.

However, Kerim Has, a Moscow-based analyst who closely monitors the eight-year-long Syrian conflict, argued, “If Erdogan is to burn his bridges with the Russians, he will undoubtedly seek watertight guarantees from the Americans about supporting his government politically, economically, militarily and otherwise, and there are few signs of this for now.”

Until such time, Has told Al-Monitor, “Erdogan will likely seek to carry on with his dangerous brinksmanship between the United States and Russia.”

Turkey’s hopes of keeping ties with Russia on an even keel may explain why hardly any of the pro-government newspapers featured the plight of civilians struck by regime bombs on their front pages today. Yeni Safak did mention "explosions" in its online edition, but it was referring to the large number of Russian tourists flocking to Turkey’s southern Mediterranean resorts.

The United Nations has warned of the imminent humanitarian disaster facing Idlib’s estimated three million residents should the regime offensive continue to escalate. As of May 22, nearly 300,000 civilians have fled as the regime continued its indiscriminate bombing targeting hospitals and schools. But with Turkey unwilling to add to its bulging Syrian refugee population — it's believed to be close to four million — they have nowhere safe to turn.

Footage from Maraat al Noman posted on social media showed civilians screaming for help as they ran through blood-covered streets after bombs landed on a marketplace. At least four civilians, including a woman, were killed, according to the Syrian Network for Human Rights. Another monitoring group, the London-based Syrian Observatory for Human Rights, said the civilian death toll since the latest escalation began on April 30 had reached 333, of which 78 were children.

In the meantime, while Moscow “will continue to give [Erdogan] all the the appearances of a central diplomatic role, it will ultimately want Ankara to give up its military presence in Idlib, Afrin and Jarablus” and to restore full regime control, Pierini predicted. Paradoxically, Russian military aircraft currently supplies its Hmeimim air force base with missiles and other weaponry, using Turkish airspace with Ankara’s consent, suggesting Ankara may well be resigned to such an outcome, or simply has no other choice.