Talks between Turkish President Recep Tayyip Erdogan and Russia's Vladimir Putin appeared to start out on a warm note today and are likely centering on the future of Idlib as well as US plans to create a safe zone in Kurdish-dominated northeastern Syria. 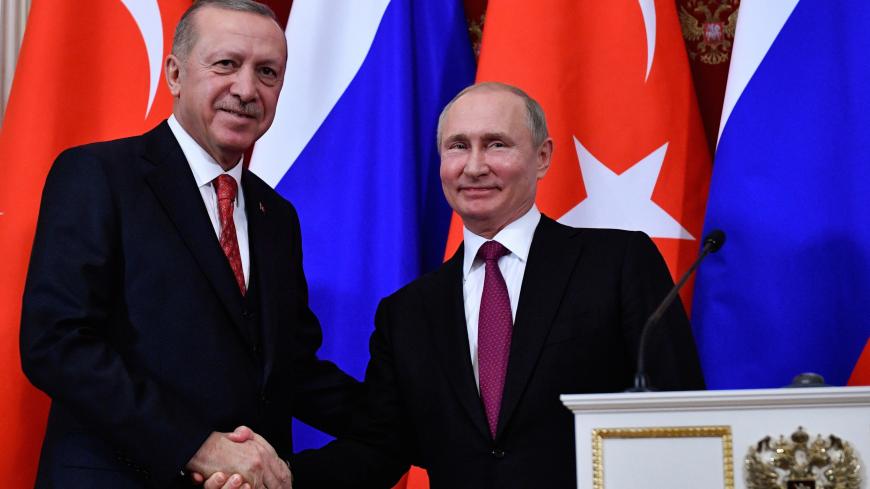 Russian President Vladimir Putin and his Turkish counterpart Recep Tayyip Erdogan shake hands at the end of a joint press conference following their meeting at the Kremlin in Moscow, Russia, Jan. 23, 2019. - Aleksander Nemenov/REUTERS

The talks kicked off with much bonhomie.

“We’re continuing the practice of regular meetings,” Putin told Erdogan at the start of the Kremlin rendezvous. “I must say that they have yielded positive results.” Erdogan said there has been “a clear improvement in our political, military, economic, trade and cultural ties.”

The leaders had not emerged from their meeting as of time of publication.

The future of Idlib, now under the near full control of al-Qaeda-linked Hayat Tahrir al-Sham (HTS) extremists, and US plans to create a safe zone in Kurdish-dominated northeastern Syria will have likely topped the agenda. The sensitive topic of Russia’s escalating tensions with Ukraine, Turkey’s top Black Sea ally, will have been broached alongside Turkish plans to acquire Russian S-400 missiles, a deal that is driving Washington mad.

Analysts say Putin will have gauged Erdogan on a potential regime offensive against Idlib that Turkey managed to stave off in September under a cease-fire agreement signed in Sochi. It implicitly called for Turkey to remove “radical terrorist groups” from a buffer zone between Syrian government and opposition forces and restore regime access to the strategic M4 and M5 highways connecting Aleppo, Latakia, Homs, Damascus and Saraqib. Ankara either failed or didn’t want to do so, allowing HTS to drive out its rivals, including the Turkish-backed Noureddine al-Zinki group from Idlib. Paradoxically, this may help achieve the same result as the regime and Russia will now have a free hand to go after what has become a near-homogenous HTS zone.

Cavusoglu said last week that Ankara was ready to cooperate with Russia and Iran as well as the United States to confront jihadists in Idlib and prevent a broader offensive on the enclave. But analysts reckon Russia’s patience is running thin.

Kerim Has, a Moscow-based Turkish academic specializing in Turkish-Russian relations, asserted, “The Russians’ priority is to find a formula of a kind that will facilitate a decisive regime offensive against Idlib with minimum fallout for Turkey and simultaneously pave the way for cooperation on the ground between Turkey and the regime.” Has told Al-Monitor, “With HTS now in control of Idlib, Turkey will likely no longer object.”

Even if this proves true, the fate of some three million civilians and fighters crammed inside Idlib, many of whom might head to Turkey, remains unsure. With more than 3.5 million displaced Syrians on its hands, Turkey does not want any more and has sealed its border shut. Would the regime guarantee their safe passage to other areas, including to Turkish-controlled Afrin and the Euphrates Shield zone? And would Russia underwrite it? Erdogan must be asking.

As for the US-protected zone in northeastern Syria, Turkey’s overriding objective is to roll back the political and military influence of the the Syrian Kurdish People’s Protection Units (YPG). Ankara has been juggling relations with Moscow and Washington to this end, playing one against the other as needed.

President Donald Trump's announcement that the United States would be pulling out all of its troops from Syria seemed to upend Turkey’s plans to secure US backing to demobilize and disarm the YPG. But Trump walked back his initial claim that around 2,000 or so US forces would leave in 30 days (they will, albeit later, and the Pentagon is acting and planning accordingly), allowing Turkey to recalibrate its strategy.

While Erdogan continues to threaten military action against the YPG, Ankara is waiting to see what precisely the United States has in mind and in the meantime is increasing pressure on it to cede control of the mainly Arab town of Manbij, where four US citizens including servicemen were killed last week in a bomb attack that was claimed by the Islamic State. Erdogan renewed offers to secure the town in a phone call with Trump on Sunday.

Manbij is currently run by the YPG’s Arab allies and Turkey wants them to be replaced by its local proxies. Trump’s new Syria envoy, James Jeffrey, has backed Turkey’s position on the Manbij road map that was agreed on in June to forestall a Turkish attack.

Jeffrey’s hawkish approach, shared by national security adviser John Bolton, has played to Turkey’s benefit. Both view Turkey through a Cold War lens and are horrified by their NATO ally's apparent drift toward Russia.

Ankara has displayed cautious enthusiasm over their talk of a safe zone along Turkey’s border that would drive the YPG deeper south and is brandishing it to enhance its bargaining position with the Russians.

In truth, Turkey is no keener than Moscow, Tehran or Damascus on any US scheme that would continue to grant US air dominance over the area because it would by default protect the YPG. And even if the Syrian militants are moved away from the border, Turkey wants them to be disbanded altogether. But the Pentagon makes no secret of its admiration and continued desire to work with the YPG, so it would push back. In any case, with top administration officials dropping like flies, there are no guarantees that either Bolton or Jeffrey can ultimately prevail over Trump if he sticks with orders to withdraw. Ankara knows this and is unlikely to place all its eggs in the United States’ basket and will continue to work closely with Moscow for the foreseeable future.