Turkey says it has completed preparations to intervene in Syria's Manbij and the Kurdish-controlled area east of the Euphrates River. 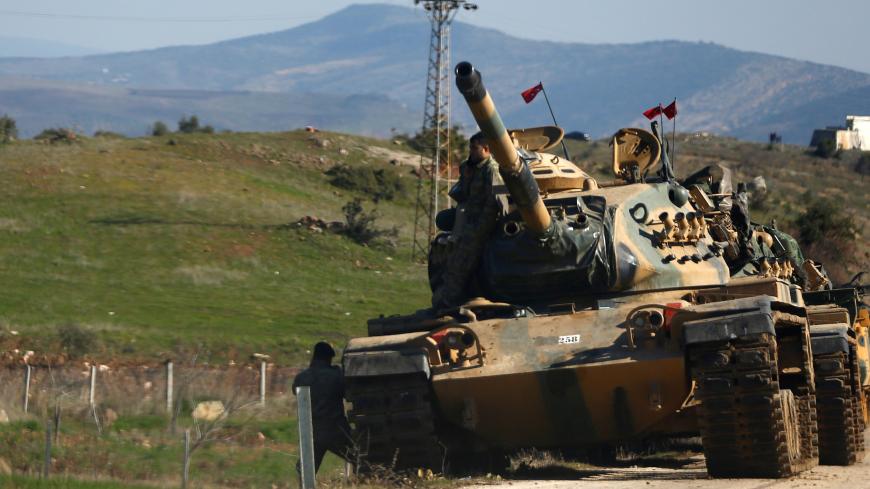 Turkish soldiers stand next to a tank near the Turkish-Syrian border in Kilis province, Turkey, Jan. 31, 2018. - REUTERS/Osman Orsal

The Turkish military has completed its preparations to intervene in Manbij, the mainly Arab town in northern Syria that is emblematic of continued friction with the United States, as well as east of the Euphrates River, where Washington’s Kurdish allies govern a stretch of territory running all the way to Iraq. “When the time comes, the necessary measures will be taken," said Turkish Defense Minister Hulusi Akar during a visit to a military facility in the central Anatolian province of Eskisehir today.

The comments are the latest in a volley of Turkish vows to take action against the Syrian Kurdish People’s Protection Units (YPG), Washington’s top ally in the fight against the Islamic State, and to establish a safe zone 20 miles (32 kilometers) deep along its southern border with Syria. On Monday, Turkish President Recep Tayyip Erdogan said the zone would allow the four million or so Syrians sheltering in Turkey to go back home and rid the area of "terrorists," as Turkey labels the YPG.

While Turkish leaders beat the war drums, Ilham Ahmed, the co-chair of the YPG-friendly Syrian Democratic Council, is in Washington to lobby the Donald Trump administration and assorted congressmen to prevent a Turkish offensive and to secure backing for a safe zone that would protect the Kurds from Turkey. Ahmed, who has also been speaking at closed-door sessions at several think tanks and spoken to journalists, was captured on camera at the Trump hotel in a pre-arranged run-in with the US president, who briefly spoke to her and reportedly pledged to set up a safe zone for the Kurds. But that is unlikely to materialize in the face of stiff resistance from Turkey to any arrangement that would allow the YPG to continue to exert its influence with US help. But then, the kind of safe zone Turkey is purportedly angling for, one that becomes a parking ground for Syrian refugees and with the YPG demobilized, disarmed and pushed south, is no more likely, unless either the Pentagon or Moscow sign off on those terms. They are unlikely to do so.

Both sides know this and are bargaining with the main stakeholders from a maximalist position in the hope of gaining the upper hand before US troops withdraw.

But as many analysts point out, the lack of a coherent US policy has emboldened hawks within the administration who are opposed to a US withdrawal on a number of fronts. Topping the list are worries that IS will make a comeback, Iran and Russia will dig in and Assad will remain in power without ceding to any of the opposition’s demands. Their unwillingness to accept that US forces are leaving is muddying the waters and building false expectations, particularly among some Kurds. While Ahmed told Bloomberg last week that “what [she’s] heard from the Americans suggests they aren’t going to put a deadline for withdrawal yet,” well-informed sources familiar with the US-led coalition’s planning told Al-Monitor on condition of strict anonymity that one could come as early as May.

Nevertheless, the president’s Syria team led by former US Ambassador to Ankara Jim Jeffrey seems bent on implementing his vision for a “no fly/no-drive zone” in northeastern Syria outlined in a paper he co-authored for the Washington Institute for Near East Policy before joining the administration. Its recommendations address the worries of the non-exiteers while pushing for “some reconciliation” between Ankara and the YPG.

An official from the YPG-led Syrian Democratic Forces (SDF) who asked not to be identified by name confirmed that Jeffrey has been assuring Ahmed and others that Turkey is interested in dialogue. Ahmed appeared to confirm this in an interview with the Associated Press today. She said that the United States has focused on a “calming” Turkey to find a compromise that would allow the YPG to remain. At the same time, US diplomats are reportedly telling Ankara that the YPG is interested in dialogue, with Turkey presenting a rosier picture of the Syrian Kurds' stance.

All of this is calculated to prevent the Turks from negotiating with Russia and the Kurds from doing so with the Assad regime. In truth, there are absolutely no signs that Turkey is ready to yield anything to the YPG, least of all before nationwide municipal elections that are due to be held in March.

Damascus isn’t either, according to Ahmed. She told the Saudi newspaper al-Riyadh the negotiations with the regime had “gone nowhere” and that the United States kept offering assurances but no action. Top YPG commander Sipan Hemo, on the other hand, told Reuters that the Syrian government’s “stance was positive” but that no direct talks had been held with Damascus to date.

Meanwhile, the Kurdistan Workers Party (PKK), which in Ankara’s eyes is indistinguishable from the YPG, has been making subtle overtures to Iran, part of a long-running strategy of hedging its bets. Cemil Bayik, one of the top PKK commanders operating out of the Qandil mountains separating Iraq from Iran, told the pro-PKK Medya news channel in a recent interview, “The policies crafted by America against Iran have not yielded many results. Iran seems more successful.” Although Bayik acknowledged Iran’s policies toward its Kurds were “no different” from those of Turkey — neither is interested in solving their respective Kurdish problems — Iran had nonetheless “realized that the Kurdish dynamic is the most vibrant dynamic in the Middle East” and that this might affect its policies. Cutting through the verbosity, it is clear that the PKK views the alliance with the United States, as US officials themselves have repeatedly stressed, as tactical, temporary and transactional. The multimillion-dollar bounties the United States placed on Bayik and two other key PKK leaders in November will have sharpened that perception. “Pretending otherwise now just to get us to cooperate with Turkey is not going to work,” the SDF official said.