Erdogan vows to 'destroy all terror nests' in Syria

Turkey's president has sworn to "destroy" terror groups in Syria in an outburst likely triggered in part by the US-led coalition training a new Syrian border security force that will include YPG fighters. 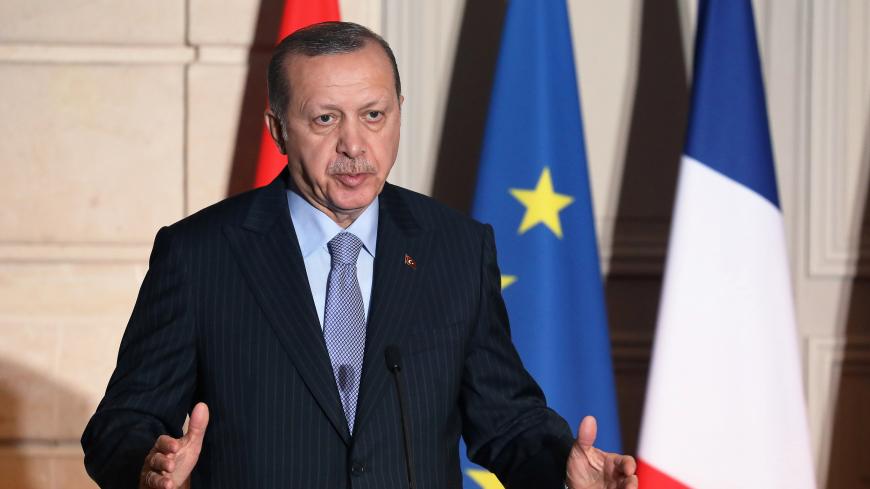 Turkish President Recep Tayyip Erdogan vowed to “destroy all terror nests” in Syria today, as he kept up his verbal attacks against the United States over its continuing support for the Syrian Kurdish People’s Protection Units (YPG).

Speaking before members of his ruling Justice and Development Party, Erdogan asserted, “In a short span of time, we will destroy all terror nests, one by one, in Syria, starting from Afrin and Manbij.”

The volley of threats followed a night of shelling by Turkish forces and their Free Syrian Army allies targeting Afrin, the Kurdish-majority enclave on the Turkish border that is under YPG control.

A local resident contacted via WhatsApp told Al-Monitor on condition that they not be identified that shells began landing at 8 p.m. Syrian local time and continued unabated till 3 a.m. Some, the resident claimed, fell within close proximity of a nearby Russian military camp. “The noise was infernal and civilians are terrified,” said the resident, who lives 8 kilometers (5 miles) south of the Turkish border. “But nobody was killed and save for a few shattered windows there was hardly any damage.”

Turkey has repeatedly threatened to attack Afrin and Manbij, an Arab-majority town that lies further east and is also under YPG control. But so far its actions have been limited to sporadic artillery strikes initiated from the Turkish side of the border and from within the Euphrates Shield zone run by Turkey and its rebel allies.

The general consensus is that Turkey cannot launch any substantive military operations against the YPG in Afrin without Russia’s consent.

This is because Russian forces patrol the skies over the region and are present on the ground. Similarly, targeting Manbij could trigger a confrontation with hundreds of US special forces deployed in the YPG-controlled areas, which extend from Manbij all the way to Iraq.

Could this burst of warmongering be different? How many more times can Erdogan pledge to crush the YPG and do nothing without denting his credibility? Omer Taspinar is a Middle East expert at the National War College and fellow at the Brookings Institution. He told Al-Monitor, “The feeling, increasingly even within traditionally cautious Turkish Foreign Ministry circles, is that Turkey’s prestige is on the line. And that an operation is feasible.” Russia may well consent to a limited and clearly defined Turkish foray, he argued, as it did when Turkish troops seized control of Jarablus in August 2016.

The challenge for Moscow remains how to not jeopardize its relations with the YPG and President Bashar al-Assad, who are viscerally opposed to Turkey’s presence in Syria. The United States is also squeezed because the YPG has made it clear that any Turkish attack on Afrin will be seen as a test of the coalition’s solidarity with the Syrian Kurds.

Either way, Erdogan seems bent on taking action and although Turkey’s Syria policy looks like a giant failure, that is not to say that it doesn’t retain considerable influence, if only to be disruptive, by virtue of its 900-kilometer (560-mile) border with Syria.

Speaking at a factory launch on Monday, Erdogan took direct aim at the United States. “Lower your flags over the terrorist [YPG] bases so that we are not forced to hand them over to you ourselves, so that we are not forced to bury those who stand by the terrorists in the ground,” he warned. “The Turkish Armed Forces will settle the Afrin and Manbij affairs in the shortest possible time. The offensive can begin any second.”

Erdogan’s latest bout of ire appears to have been triggered in part by the US-led coalition’s announcement that it has begun training a new Syrian border security force that will include YPG fighters. Half of the 30,000-strong “terror army” in Erdogan’s parlance will be comprised of the YPG-led Syrian Democratic Forces (SDF) and the rest will come from fresh recruits. According to media reports they will be deployed along Syria’s borders with Iraq and Turkey, to, among other things, prevent the Islamic State (IS) from moving back to or fleeing from Syria.

Coalition sources insist the force will help ensure “the stability of our partners Turkey and Iraq” and that “some of the SDF will be focused on maintaining security of those borders pending a longer-term settlement of the civil war in Syria.” But in Turkey’s eyes the continued honing of the YPG’s skills is further proof that the United States was lying about its relationship with the group when it claimed it was “temporary, transactional and tactical” and would end after the fall of Raqqa.

The YPG is part of a broader constellation of armed Kurdish groups, notably the Kurdistan Workers Party (PKK), that continue to wage war against Turkish security forces. Hence Ankara’s frustration — and fear — that at some point the YPG will melt back into the PKK and direct its weapons and training from the coalition against Turkey.

Turkey has so far swallowed the US partnership with the YPG — albeit kicking and screaming — on the assumption that it would end once IS was vanquished and that the United States would not embark on any form of nation-building that would cement the Kurds’ territorial and political gains. But recent statements from top US officials suggest the United States is reviewing its options as reported in detail by Al-Monitor’s Bryant Harris.

Sam Heller is a Beirut-based Syria analyst and a fellow at the Century Foundation. He told Al-Monitor, “There’s been a running debate inside the US government over America’s role in Syria, post-Islamic State. One camp within the government has been convinced that a continued presence in the northeast gives America leverage it can use towards a national political solution and change in Syria’s political center up to and including the departure of President Bashar al-Assad — that is regime change. This camp apparently won out.”

However, Heller noted, “This is not how America previously represented its mission in Syria and it’s a reversal that’s going to meet with an unhappy reaction from the Syrian regime and its allies, Russia and Iran. And to the extent that it signals a long-term US commitment to and some form of political recognition of the YPG or YPG-dominated entities, it seems like it’s going to upset Turkey too.”

That is something of an understatement.

James Jeffrey is a former US ambassador to Iraq and Turkey and a fellow at the Washington Institute for Near East Policy. He too believes Erdogan may well follow through on his threats to attack Afrin this time “because he is so terribly frustrated over the whole Syria/YPG mess.” Jeffrey told Al-Monitor relations between the NATO allies had deteriorated to the point where “the US military has decided no matter what it does or doesn’t do it will be attacked by Turkey verbally and diplomatically, and Turks will maneuver dangerously on the ground.” Yet while the US military “feels nothing they can do will appease Turkey,” they are also convinced that “nothing they do will be blocked by Turkey, so Turkey has been largely ignored.” Such reasoning has borne the sort of complacency Jeffrey noted, whereby “the US military believes that Turkey will not act seriously against US activities. I fear this is absolutely wrong.”

Should Turkey finally take the plunge, it is likely to face tough resistance from the YPG and retaliatory attacks from the PKK at home. In a research note circulated to subscribers, Teneo Intelligence, a risk consultancy, predicted, "Far from intimidating Washington into withdrawing its support for the [YPG], an invasion of Afrin would be more likely to lead to the US continuing and even increasing its support."

Back in Syria, the YPG says it's ready for the Turks and their allies. Sipan Hemo, the top commander of the YPG, told the pro-Kurdish Firat News Agency in an interview, “The battle will be historical and [mark] the end. … Freeing the region from Erdogan … is our fate.”

by Haitham EL-TABEI with AFP correspondents in the Middle East | AFP | May 17, 2022
END_OF_DOCUMENT_TOKEN_TO_BE_REPLACED