Intel: How Russia and Iran are drawing closer on Gulf, Syria

The Russian and Iranian foreign ministers met in Moscow to discuss regional issues and opportunities for cooperation. 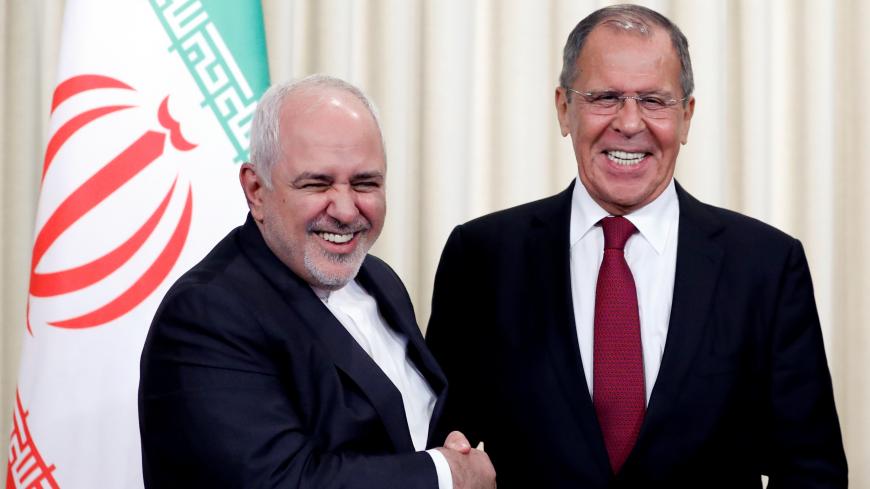 Russian Foreign Minister Sergey Lavrov hosted his Iranian counterpart Mohammad Javad Zarif on Monday for wide-ranging talks on everything from the 2015 nuclear deal and the conflict in Syria to Gulf tensions and the wars in Yemen and Afghanistan. In the run-up to the meeting, the Russian Foreign Ministry stressed the importance of “the tradition of good neighborly relations and mutual respect” between the two countries and highlighted the fact that Presidents Vladimir Putin and Hassan Rouhani have met twice this year.

Why it matters:  Iran is at the center of increasing tensions across the region, from the slow implosion of the nuclear deal to attacks on shipping in the Gulf and Israeli attacks on Iranian proxies in at least three countries. Zarif’s trip to Russia is part of a weeks-long tour of Europe and Asia to try to secure some support against US President Donald Trump’s maximum pressure campaign.

Russia, in turn, is enthusiastic about promoting its version of a multilateral plan for Gulf security that incorporates Iran while seeking an end to its costly intervention in Syria. Progress on both the military and political tracks remains elusive, and Moscow is eager to have Iranian support ahead of this month’s trilateral summit of the Astana peace process partners — Russia, Iran and Turkey — in Ankara.

Do not trust, re-verify:  Zarif told an assembly of Russian policy experts and journalists at the Iranian Embassy in Moscow that he saw a “fundamental concurrence” between Iran's plan for Gulf security and the Russian one. “Both plans imply cooperation of all regional states, not their conflict,” Zarif told Al-Monitor. “This is a solid basis for further cooperation between Russia and Iran. … There might be some disagreements between our views and those of Russia when we come to specifics but what matters is the very orientation towards cooperation.”

Meanwhile, speculation in Moscow is rife that Turkey and the United States are discussing ways to amend plans for a Syrian constitution-writing panel in their own interests. Asked whether Iran is concerned, Zarif said that falling from “Astana’s grace” would be a strategic mistake for Ankara.

“Iran, Russia and Turkey have stark differences on Syria. But we also have a common understanding, a common goal that helped Astana become the most successful format on Syria,” Zarif said. “We want the conflict to end. We want separatist groups that challenge the territorial integrity of Syria to be disbanded.”

He went on, “The Americans have a different goal in Syria. From day one they sought to topple the Syrian leadership and they still pursue this goal. If Turkey seeks to promote its interests by holding talks with Americans, we don’t think it’s the best option. To be entirely honest, the American goal is to fight Iran in Syria, not provide security for Syria.”

Lavrov for his part expressed support for quick action on the constitutional committee to set the stage for new elections in Syria.

“We discussed prospects for political process with a view of soon launching of the Constitutional Committee,” Lavrov said at a joint press conference after meeting with Zarif. “We hope we are not going to see new attempts to throw a wrench into these efforts and that our UN colleagues will not hesitate to approve the list that the [Syrian] government and opposition groups agreed upon as well as the procedure rules.”

Know more:  Our latest Week in Review column explores Russia’s role as a broker between Iran and its US and Gulf Arab foes. And be sure to read Russia Mideast editor Max Suchkov on “Why Russia is calling for rethinking Gulf security.”