Are Egypt's women really better off under Sisi?

Life for women in Egypt has improved significantly under the reign of President Abdel Fattah al-Sisi compared to the era of the Muslim Brotherhood, although some female activists say that women still have a long way to go toward emancipation. 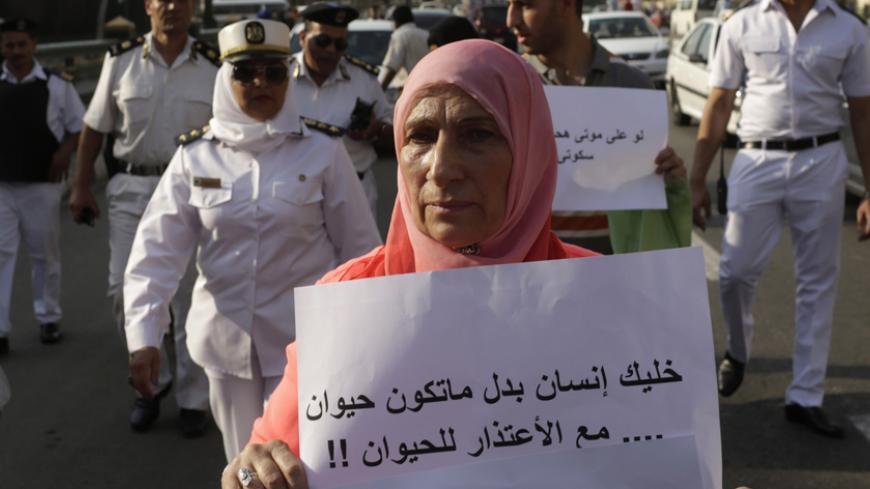 A female protester holds a sign near police officers as she joins others protesting sexual harassment, in Cairo, June 11, 2014. - REUTERS/Asmaa Waguih

Since the revolution, Egyptian women have played a pivotal role in political transformations by participating in Egypt's elections. They featured prominently in the June 30 movements of 2013, the subsequent constitutional referendum of 2014 and the election of President Abdul Fattah al-Sisi in 2014. Now is the time to evaluate the status of Egyptian women during Sisi’s reign compared to the years following the revolution and examine whether there was a real shift in the Egyptian authority’s approach toward women.

On the subject of women's status during Sisi’s era compared to the Muslim Brotherhood’s rule, the former secretary-general of the National Council for Women, Ambassador Mona Omar, told Al-Monitor, “Women's rights under the rule of President Sisi improved compared to their situation during the reign of President Mohammed Morsi and the Muslim Brotherhood.” Omar explained that the 2014 constitution enhanced the situation of Egyptian women, saying, “Egypt's new constitution contains articles in favor of Egyptian women.”

Among the articles that promote women's rights is Article 6 on citizenship, which states, “Citizenship is a right to anyone born to an Egyptian father or an Egyptian mother.” Article 11 on equality between men and women stipulates, “The state commits to achieving equality between women and men in all civil, political, economic, social and cultural rights,” while Article 180 on the political empowerment of women states, “Every local unit elects a local council by direct, secret ballot … provided that ... one-quarter is allocated for women.”

Omar pointed to the improvement in women’s status during Sisi’s rule, marked by the "president's visit in June 11, 2014, to the girl who was harassed in Tahrir Square — which was the first visit made by an Egyptian president to a victim of harassment. The visit drew the attention of officials who became interested in the issue of harassment against Egyptian women. In addition, the Ministry of Interior established police departments in all security directorates to fight violent crimes against women and appointed women officers in police stations.”

Omar believes that the main sign of improvement of women’s status under Sisi’s reign was “the appointment of Fayza Abu al-Naja as the president’s adviser for National Security Affairs, thus becoming the first woman in Egypt and the Middle East to occupy this position.”

Head of the Egyptian Center for Women's Rights Nuhad Abu al-Qomsan shares Omar’s opinion. She told Al-Monitor, “Women’s status has improved under the era of President Sisi, compared to their situation under President Morsi and the Muslim Brotherhood’s rule in Egypt, and before that under the Islamists, who won the parliamentary elections in 2011-2012.”

Political science professor at the Faculty of Economics and Political Science at Cairo University Dina Al-Khawaja agrees with this point of view. However, she told Al-Monitor that she believes “The status of women under Sisi’s era improved without any objective signs.” Khawaja explained, “The political representation of women is not an indicator of the improvement of women’s situation in general; women remain marginalized in the labor market and harassed in the public domain.”

A report issued by Amnesty International, “Circles of Hell: Domestic, Public and State Violence Against Women in Egypt​,” takes a different direction. It confirms that Egyptian women still face state violence, domestic violence, sexual assault and torture in prisons and that the Egyptian efforts to eliminate violence against women are too little and too late and not at all adequate to confront sexual and physical violence suffered by women and girls in Egypt.

Khawaja believes that the “successive Egyptian governments have not dealt with the Egyptian women's rights issue as a separate one. Rather, they deal with it as an issue linked to a larger matter: security and national interest.” She explained, “Women’s demands are often annexed to broader demand agendas, such as the national liberation during President Gamal Abdel Nasser’s reign, and building of state institutions during President Anwar Sadat’s era, as well as the national stance against terrorism during President Hosni Mubarak’s rule. The state handles women’s demands and rights as a subsidiary issue in return for the popular support of the current political regime.”

In order to improve the Egyptian women’s situation, Sisi’s government has to include the women’s rights issue, after the parliamentary elections set for April, on the legislative agenda of the next parliament and do more to encourage women to participate in the Egyptian public and political life.