Egyptian President Abdel Fattah al-Sisi has made strides in politically empowering women in the past year and likely hopes the progress guarantees him a solid base of voters in the upcoming elections. 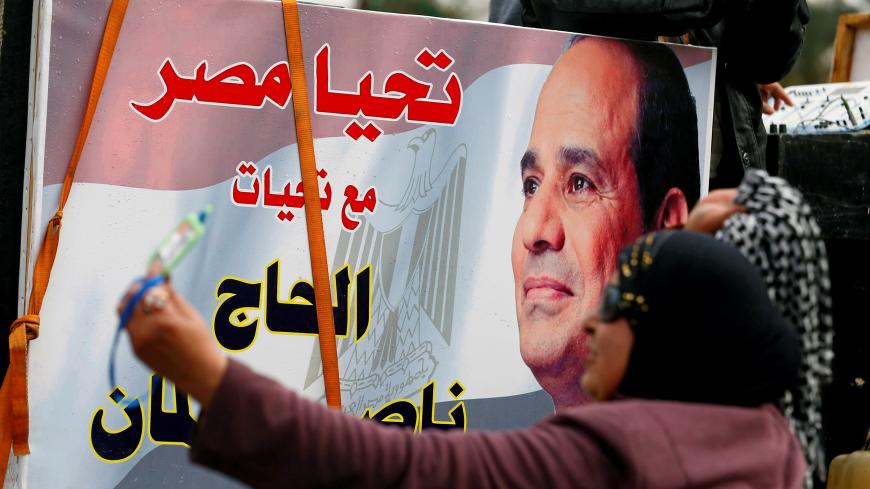 CAIRO —  The Egyptian parliament approved an amendment on Jan. 14 to include new portfolios in Prime Minister Sharif Ismail’s government. The amendment, proposed by President Abdel Fattah al-Sisi, appoints Abu Bakr al-Jundi as minister of local development, Enas Abdul Dayem as minister of culture, Rania al-Mashat as minister of tourism and Khaled Mohammad Ali Badawi as minister of the business sector.

With this amendment, the Egyptian government would include six women holding ministerial portfolios, with Ghada Wali as minister of social solidarity, Hala al-Said as minister of planning and scientific research, Sahar Nasser as minister of international cooperation and Nabila Makram as minister of immigration and expatriate affairs, in addition to the newly appointed Abdul Dayem and Mashat.

During the Nation’s Story conference held on Jan. 17 in Cairo, Sisi courted Egyptian women, saying, “There has been increased interest in women since I became president, as they now constitute 15% of the parliament and 20% of the government,” compared to 12.7% in the 2010 parliament and 10.7% in 2012.

Sisi announced last March that 2017 would be “the year of Egyptian women,” and together with the National Council for Women directed the state institutions to follow the 2030 Women’s Empowerment Strategy as the working document for the coming years.

The strategy aims to entrench equality in rights and work opportunities as core values of Egyptian society, and seeks to eliminate all forms of gender-based discrimination and to ensure women’s basic rights and protection in the Egyptian state.

Azza Haikal, a member of the National Council for Women, said the president has recognized women’s efforts during the country’s political stages since the incidents of June 30, 2013. Haikal told Al-Monitor over the phone, “Sisi made sure that women gained some rights, though they are still not actively represented in local councils and governorates. We want women to be part of the decision-making centers.”

Haikal said that it is still a violation of the constitution for women to be appointed as public prosecutors.

She added, “For the first time, we have a female minister of culture. We are seeing huge changes in women’s roles in Egyptian society, and we hope it will evolve.” Haikal said Sisi is trying to win over women, but Egyptian women often consider public interests, not just personal ones, in major political decisions.

Haikal noted that actual achievements are needed to appeal to female voters, and that they are a very diverse group. Unlike their urban counterparts, illiteracy is high among women in rural areas and in Upper Egypt, where they are largely uninterested in representation in the government.

Amr Hashem Rabih, deputy head of Al-Ahram Center for Political and Strategic Studies, agrees with Haikal. He said that unlike more urban women, many women in Upper Egypt and rural areas are more concerned about their economic problems such as the high cost of living.

Rabih told Al-Monitor over the phone that he believes women’s representation in the government will not by itself eliminate economic problems like inflation.

Parliament member Suzy Nashed said Sisi promised women a key role during his presidency, and he followed through by appointing women to positions in the government. She told Al-Monitor that women form the core of families and wield considerable influence. She said Sisi was not just flattering women with representation in politics and the government and has been working to create an environment in which women will be empowered in the highly patriarchal Egyptian society.

A study prepared by the Democratic Arabic Center for Strategic, Political and Democratic Studies in July 2016 indicated that Egyptian parties tend not to nominate female candidates because of a genuine belief that women cannot win a parliamentary seat and those who know better use the idea as an excuse to avoid fielding them.

Nashed said, “If Sisi is betting on women, it will pay off.” She talked about women's participation in the 2013 protests that overthrew Morsi and said she expects them to be well represented in the 2018 elections.

Women participated in anti-Muslim Brotherhood protests and voiced their dissent over the 2012 constitution through organizations such as the National Front of Egyptian Women, Nashed noted, saying that Egyptian women are interested in participating in the political process. She added, “We are proud of what Sisi is doing for women.”

Women make up 25 million eligible voters in Egypt, 48.5% of the overall voter population. In the 2014 constitutional referendum, women’s participation reached 55%, and their 54% of all votes cast settled the presidential race in 2014 in favor of Sisi.