Egypt electoral law a step toward justice for women

In an interview with Al-Monitor, veteran diplomat Mervat Tallawy talks about women in the Egyptian parliament and the long road that they still have ahead to reach equitable leadership positions. 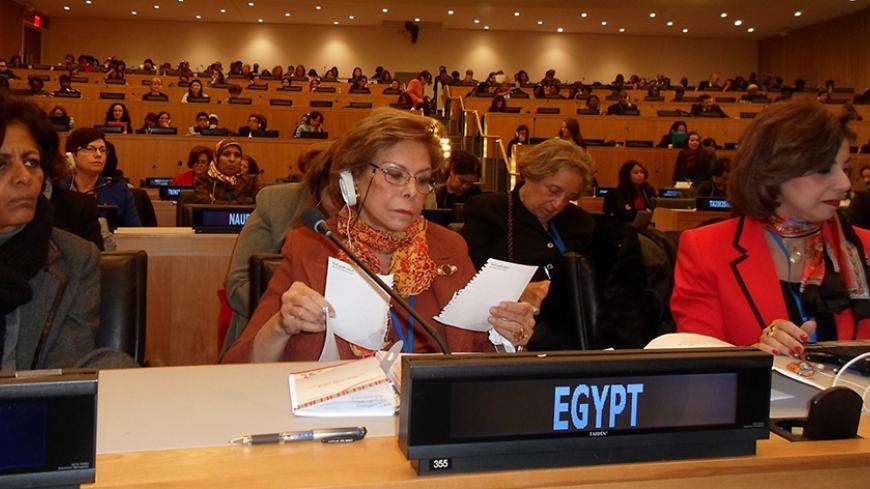 Mervat Tallawy (C) participates in a high-level round table on the sidelines of the Commission on the Status of Women meeting at the UN headquarters in New York, March 11, 2014. - FACEBOOK/Mervat Tallawy

The Egyptian electoral law allocated 56 parliamentary seats to women in addition to 14 others appointed by the president, ensuring that 70 women would reach the parliament. The law allows women to compete for all individual seats in order to guarantee them proper representation in parliament.

As a result, in the first round of parliamentary elections held on Oct. 17 and 18 outside Egypt and on Oct. 19 and 20 within the country, women succeeded in winning five individual seats in addition to the 28 gained through their inclusion on electoral lists.

In spite of this progress, Egyptian women face many difficulties that hinder them from reaching senior state positions, including the cultural machismo, clan ethnocentrism and social mores and traditions that rule a great number of Egyptians.

Ambassador Mervat Tallawy had been at the forefront of the movement to defend women’s rights in Egypt. She was one of the first women to enter the diplomatic corps and the first female diplomat to reach the position of ambassador. Tallawy was appointed Undersecretary-General and Executive Secretary of the Economic and Social Commission for Western Asia from 2001 to 2007, making her the first Arab woman to hold that post. Her efforts in this field continued, and she was later appointed president of the National Council for Women.

Al-Monitor spoke with Tallawy on the role of the council in advancing the cause of women, Egypt’s electoral law and her opinion concerning the allocation of parliamentary seats to women to guarantee their proper representation.

Al-Monitor:  So far, women have won five individual seats, in addition to another 28 list-based seats in the next parliament. In light of the challenges that women face, is that an achievement?

Tallawy:  Without a doubt, the success of women deputies in this first round of parliamentary elections, be it as individuals or part of lists, is an achievement and testament to the fortitude and perseverance of women, as well as their belief in their role and the importance of their participation in the service of their compatriots; particularly considering that they faced fierce competition from a large number of candidates in the first round, in which they ultimately prevailed. But unfortunately, this accomplishment does not rise to the level of our ambitions, especially considering that the degree of development in any country is measured by the extent of participation by women in leadership roles. Regrettably, women in Egypt have yet to secure their right to assume such leadership positions.

Al-Monitor:  Are these seats enough to empower women and guarantee them their rights in society?

Tallawy:  Like I always say, this is just a start. Current female parliamentarians now have a great task to accomplish, for their success reflects on the cause of Egyptian women in general, all of whom expect a lot from those ladies. But the issue is not one of numbers, but of the contributions, results and hard work that those ladies will provide. Today, we believe that women are more aware and have greater knowledge of the problems that people face in everyday life, for their capacity as working women, wives and mothers gives them better insight into the economic, medical and educational issues of the populace.

Al-Monitor:  How do you asses the success of women in Upper Egypt, known for its clan ethnocentrism and patriarchal mentality, after the fiercely contested victory of a female candidate in Aswan governorate?

Tallawy:  A woman winning a seat representing one of Upper Egypt’s villages was an unprecedented accomplishment in the history of Egypt. But that accomplishment came as a result of the efforts undertaken by the council through its awareness campaigns aimed at changing the culture of machismo and all of the obsolete customs and traditions and making women and young people aware of the need to choose women representatives. They are the best suited to defend their interests and have a better long-term outlook on issues, in addition to solutions to the economic, medical and educational problems being faced due to their intimate knowledge of the minutiae associated with said problems.

Al-Monitor:  How many seats does the council expect women to win in the next parliament?

Tallawy:  According to the electoral law, women have been allocated 56 seats, as well as half the presidential appointments, numbering 14 seats, which guarantees that 70 women will become members of parliament, in addition to those female candidates that compete as individuals, of which five women have come out victorious so far in the first round. We hope that this number will further grow to 20 individual candidate wins in the second round, making the total number of female parliamentarians no less than 95 members.

Al-Monitor:  The Egyptian electoral law allocated 56 seats to women, while that number was 64 during the 2010 elections. What is your opinion in that regard?

Tallawy:  As I previously said, this is but a beginning. The circumstances in each case were different. For this year, women are competing in free and fair elections that include everyone, regardless of affiliation or aspiration, as opposed to the 2010 elections, which led to the January 25 Revolution.

In addition, under the 2014 constitution, 13,500 seats were allocated to women in local elections, which will help in the formation of a foundation of empowered women capable of participating in parliament and cognizant of their roles and responsibilities.

Al-Monitor:  How do you assess the level of electoral participation?

Tallawy:  The rate of participation in the first round of elections was not up to par, nor was it what we hoped or expected. Undoubtedly, the participation of women and the elderly was noteworthy in these elections, as it greatly surpassed that of men. Yet we hope that it will increase in the second round.

Al-Monitor:  Why were young people reluctant to participate?

Tallawy:  Instead of being left uninformed, without support or guidance, young people need to be guided and must be provided with the means to partake in the electoral process. Unfortunately, the political parties did not play their role in introducing their candidates to the people, especially in light of the fact that these parliamentary elections witnessed a great deal of competition among new faces who were unknown to voters and candidates associated with the former era’s National Party of Egypt, making it very difficult for voters to choose their candidates.

Al-Monitor:  In light of the popular acceptance that they have garnered, do you think that female parliamentarians are capable of reaching leadership positions?

Tallawy:  Egyptian women are highly competent and can fill any position, just like their male counterparts. Through the implementation of constitutional provisions, Egyptian women will fill all such positions, for the constitution provided for equal political, civic, economic, social and cultural rights between men and women. The constitution also guaranteed them the right to assume public jobs, senior positions in government and appointments to judicial bodies and committees without discrimination.

Furthermore, the National Council for Women, through its membership in the Committee of Fifty, made sure that the draft constitution contained over 20 articles that related to or benefited women. Egyptian women should take pride in the fact that their rights are mentioned in the same paragraph dealing with the state and key constituents, in itself an important development that affirms the importance of women and their role in the state and society. The constitution also affirmed that women were not a societal class, but an inseparable and essential part of society that constituted half of society and the foundation upon which families are built. In this context, our current duty is to translate those constitutional provisions into laws that guarantee the rights of women, are fair to them and give them their due consideration under the constitution.

Al-Monitor:  In light of the constitution’s equitable treatment of women, what then stands in the way of them obtaining their full rights?

Tallawy:  Women face many challenges that hinder their advancement. Foremost among those is the patriarchal frame of mind that considers all fields to be exclusively male. Add to that clan ethnocentrism and the inherited negative customs and traditions that prevail in Egypt and many an Arab country; all of which affect society, its choices and outlook on all issues. Unfortunately, this also applies to all people, educated and uneducated alike, and leads to women facing great difficulties in successfully changing said culture, which refuses to acknowledge their ability to participate and convince people that they are able to express their concerns and deal with their problems.

Al-Monitor:  What are the draft laws that the council is seeking to pass in the next parliament?

Tallawy:  We prepared a draft comprehensive law to combat violence against women that will be presented to the next parliament and will include a detailed definition of violence as an act or behavior leading to harm, physical or mental anguish, as well as contempt and the degradation of women, including threats or coercion. It also defines rape as sexual intercourse with a female without her consent, while defining "sexual molestation" as an act or behavior that constitutes a sexual violation against the victim through the improper use of the victim’s body by any means.

Given the prevalence of harassment, a draft law was also prepared that specifically defines sexual harassment, includes all forms and examples thereof and provides for harsher sentences in some cases, depending on the location of the crime and the capacity of the perpetrator.

Al-Monitor:  What are the most important laws that need to be amended in order to ensure equal rights for women?

Tallawy:  The Personal Status Law, of course. It is one of the most in need of legal intervention and amendment of some of its provisions, in order to provide housing for women during and after the child-rearing period and guarantee full alimony for mother and children.

Al-Monitor:  What is the council’s role in empowering and educating women?

Tallawy:  The National Council for Women seeks to cooperate with women and stand beside and support them through continuous training to provide them and the candidates and members of parliament and local committees with the required technical and logistical support, all the while networking and coordinating with the council’s branches in the various governorates to back the candidates, as well as study the relevant laws and help members submit requests for briefings, cross-examinations, withdrawals of confidence and reviews of state plans and budgets, in addition to the adoption of state general budgets.

Al-Monitor:  What message would you like to convey to the new parliamentarians?

Tallawy:  You bear a heavy burden to prove yourselves and make the Egyptian people aware of your abilities and capabilities, as well as the level of your real contribution to the service of the constituency that provided you with the opportunity to participate.