In an interview with Al-Monitor, the Salafist Call’s deputy chief Yasser Borhami discusses his controversial fatwas and says his party is willing to reopen the human rights dossier in Egypt. 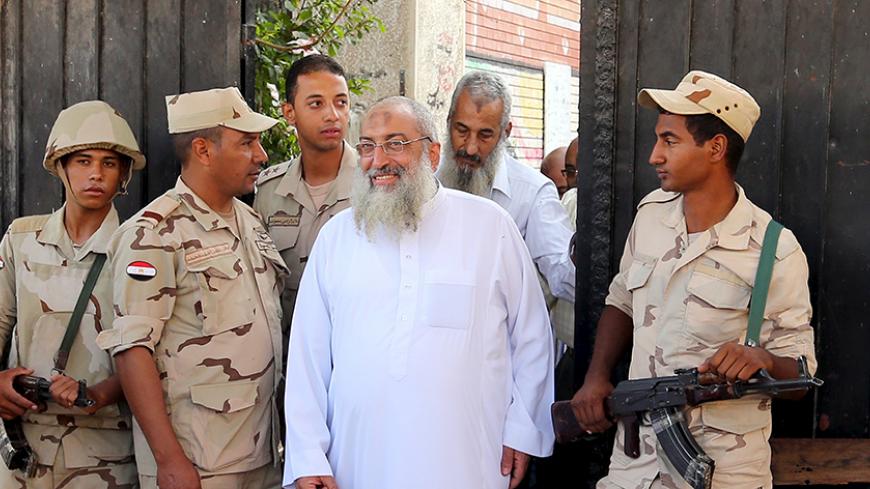 ALEXANDRIA, Egypt — In a modest house, the ground floor of which has become a medical clinic serving the poor inhabitants of Alexandria’s Sidi Bishr neighborhood, Al-Monitor interviewed the deputy head of Egypt’s Salafist Call, Sheikh Yasser Borhami, who also is a physician and Salafist preacher.

Borhami’s fatwas have been received with much shock and controversy by Egyptian and Arab media outlets. On Aug. 7, he objected to the new Suez Canal investment certificates, which he declared were haram, and he issued a fatwa on Feb. 25, 2012, against standing for the national anthem or saluting the flag. He turned Egyptian public opinion against him with a purported fatwa on Dec. 14, 2013, allowing the destruction of churches.

In the interview, Borhami revealed details about those fatwas, and also spoke of the lessons the Salafist organization took from the Muslim Brotherhood’s rise and fall in Egypt.

Al-Monitor:  You were one of those who called for a yes vote on the 2014 constitution. What is your assessment of the problems related to implementing said constitution, particularly after Egyptian President Abdel Fattah al-Sisi stated that it was drafted in good faith?

Borhami:  Some provisions of the constitution were too general, leading to many complications associated with their implementation, as was the case with the implementation of Articles 243 and 244 thereof, which stipulate the necessity to represent workers, farmers, youth, Christians, persons with disabilities and expatriate Egyptians on electoral lists. Political parties had great difficulties forming lists that include all these components, as the number [of seats] on the lists is 15 and the seats of the classes that ought to be represented in exceptional cases is 16.

With regard to Sisi’s statement that it was drafted in good faith, my opinion is that those who drafted the constitution did not take into account that some would exploit existing constitutional loopholes to try to sabotage the political process.

By the way, the current constitution is not new, but an amended version of the 2012 constitution, as agreed upon in the road map drafted with the armed forces after the June 30 [2013] Revolution. The next parliament may need to adopt further constitutional amendments in case we find difficulties implementing the current constitution’s articles. These may include the issue of allowing the current Egyptian president a third term in office when his second term ends, without granting future presidents the same right, so as not to force such a choice upon the generations to come.

Al-Monitor:  How do you view the “No to Religious Parties” campaign, which has been collecting signatures with the aim of excluding you from political life?

Borhami:  The steps undertaken by the campaign do not worry us at all, because the Egyptian Constitution did not prohibit the formation of religiously motivated parties, especially considering that under Article 2 of the constitution, Islam is the official religion of the Egyptian state, with Sharia being the main source of legislation.

Al-Monitor:  Many of your fatwas were met with objections by the imams of Al-Azhar, such as the fatwa allowing the destruction of churches. What is your opinion about that?

Borhami:  I am a disciple of Al-Azhar, and I never issued a fatwa allowing the destruction of churches. There exists a constitutional social contract between us and Christians, according to which we must live together. We remain committed to its implementation whether convinced or unconvinced by it. The Salafist Call has, on various occasions, encouraged peaceful coexistence with Christians in Egypt, for it protected their property and commercial establishments in Alexandria during the lawless period of 2011. We also helped repatriate Christian families who were driven out of their homes, as a result of confrontations with Muslim families.

Barring Suez Canal investment certificates is based on previous fatwas issued by Al-Azhar’s Fatwa Committee itself. We therefore requested that Islamic "sukuks" [financial certificates] be offered in parallel with bank-issued investment certificates. As for the fatwa permitting a man to abandon his wife to rapists in order to save himself, that was woefully distorted. It related to absolving from sin those incapable of defending themselves and who fled in order to preserve their own lives; it had nothing to do with abandoning wives to people of that sort.

Al-Monitor:  Why did the Salafist Call retract its fatwa barring the candidacy of women and Copts to parliament and go on to include a number of them on its electoral lists?

Borhami:  Indeed, I am not fully convinced about the participation of women and Copts. But a law was adopted in that regard and I am committed to said law. I am against standing at attention for the national anthem, for that is haram. But since a law in that regard was passed, it would be unwise for me to remain seated and face a six-month prison term under the new law. Throughout the ages, fatwas changed with the times. Some Muslim scholars, such as Imam Al-Shafi’i, recounted three different stories with regard to a single fatwa, and even the Egyptian Fatwa Committee issued fatwas prohibiting bank interest, followed by others allowing them.

Al-Monitor:  How did the Salafist Call deal with the decision barring veiled women from teaching at Cairo University and Egyptian Culture Minister Hilmi al-Namnam stating that Egypt was a secular state? Do you still dream of establishing an Islamic state?

Borhami:  According to the president of the university, Gaber Nassar, the decision related only to material requiring verbal interaction. But we fear that this might be the beginning of a return to the persecution of veiled women, in contravention of the constitution that guaranteed personal rights and the rights of women. Unfortunately, bearded men and veiled women have suffered from persecution in Egypt, which we hope will not be repeated. With regard to the culture minister, we requested that the president intervene to dismiss him because he violated the constitution, with our stipulating that Egypt is a Muslim state. Implementing that in reality is not a dream but a duty, and the 2014 constitution contains provisions requiring the amendment of any legislation that violates Sharia.

Al-Monitor:  Will the Salafist Nour Party compete for a majority in the next parliament? What lessons have been learned from the experience of the Brotherhood?

Borhami:  We have learned a lot from the Brotherhood experiment, and are participating with two electoral lists comprised of a total of 220 candidates. Some expect us not to win more than 11% of the seats, but I expect us to gain 15% to 20%, which does not bother us since that is in line with the normal growth rate of a 4-year-old party. Furthermore, we are not qualified to assume the reins of power. In addition, the party has no intention of forming a Cabinet, and the utmost outcome would be for it to participate therein through a certain number of portfolios.

Al-Monitor:  How do you assess the current state of human rights in Egypt?

Borhami:  Without a doubt, the human rights situation in Egypt is bad and getting worse. We have recorded grave excesses and objected to them when they occurred, among them the manner used to disperse some demonstrations, such as at Rabia al-Adawiya Square, the consequences of which still plague our society today. There are those who are trying to marginalize one sect of society, but in truth are only isolating themselves because no one will accept such socially dangerous proposals. In addition, many remain behind bars under lengthy prison sentences, not to mention the violations committed in police stations and prisons. Thus, reopening the Egyptian human rights dossier shall be one of our goals in the next parliament.