A Cairo organization is working to recruit male allies in the battle to prevent sexual harassment and other forms of violence against women. 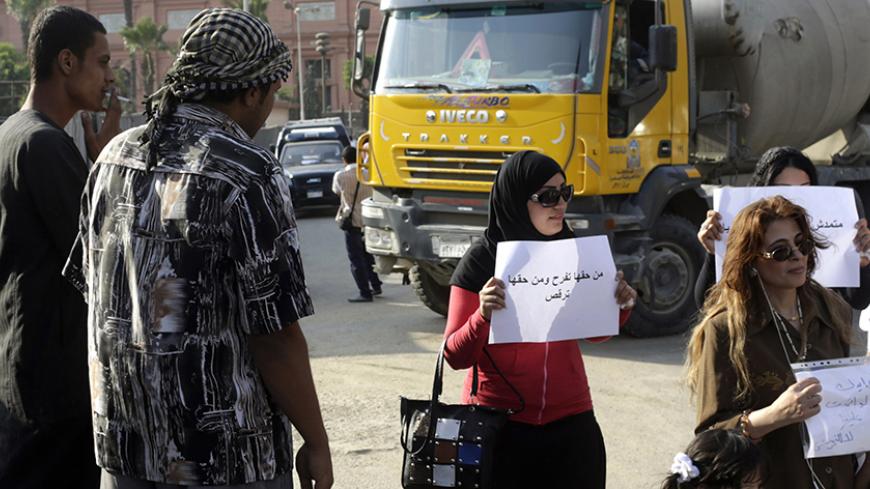 Men look at female protesters carrying signs against sexual harassment, after a woman was sexually assaulted by a mob during Sunday's celebrations marking the new president's inauguration, in Tahrir Square in Cairo, June 11, 2014. - REUTERS/Asmaa Waguih

The Appropriate Communication Techniques for Development Center in Cairo launched a project May 15 to enlist men to fight violence against women. According to a study conducted by the Thomson Reuters Foundation at the end of 2013, Egypt is the worst country for women’s rights in the Arab world.

Yara Fathi, the center's gender programs director, told Al-Monitor the new campaign will emphasize that men can help stop violence against women, despite the prevailing idea that only women support such a cause. Getting men involved will raise the issue’s visibility and provide male mentors to speak with other men about the importance of the topic.

Fathi believes integrating men in the fight will achieve success similar to that of the 2012 initiative “I spotted harassment.” She said that project, which relied on young volunteers, produced tangible results.

The new initiative targets men in local communities, university-age youth, civil society organizations, schools and the media. It addresses all forms of violence against women, starting with harassment, whether in the street or the workplace; domestic violence by a husband, father or brother; rape; forced early marriage and genital mutilation of young girls, especially in rural areas and Upper Egypt. Fathi also hopes to raise awareness about the repercussions of such violence for victims’ families.

According to a study on domestic violence published Nov. 25 by the Cairo-based Central Agency for Public Mobilization and Statistics:

To curb the violence, the National Council for Women has adopted a number of measures that include amending Article 11 of the constitution to make it more equitable. It now reads, “The state is committed to protecting women against all forms of violence.”

Egypt has nine shelters affiliated with the Ministry of Social Solidarity for abused women. A report published by the New Woman Foundation noted that meeting the criteria to enter such shelters can be difficult and there is no official specialized body that tracks statistics on the situation of Egyptian women and the forms of violence they suffer.

To address the issue of harassment, the National Council for Women formed action groups under the banner of “Let’s start [working] together against harassment,” in cooperation with representatives from the Interior, Justice and Religious Endowments Ministries. It devised a plan to help control street violence and reduce harassment of women and girls. The council created a hotline to report harassment and violence, and a million women in Egypt signed a petition supporting the council’s efforts to prevent violence. Meanwhile, in January, the council drafted a law to fight violence, joining a number of other initiatives over the years to combat the dramatic problem of harassment in Egypt.

Fathi noted that this latest project “is limited to Cairo and Giza due to the short period of time we have.” Organizers plan to run the campaign to recruit men through the end of the year, and once it is successful, to implement it in other provinces.

Nuhad Abu al-Qomsan, the head of the Egyptian Center for Women's Rights, told Al-Monitor that developing a process to help harassed women file complaints in addition to imposing penalties as a deterrent for harassers are among the most important mechanisms available to help control this phenomenon.