In a move described as “historic,” the Egyptian president issued a decision appointing a Christian judge as head of the Supreme Constitutional Court for the first time in history. 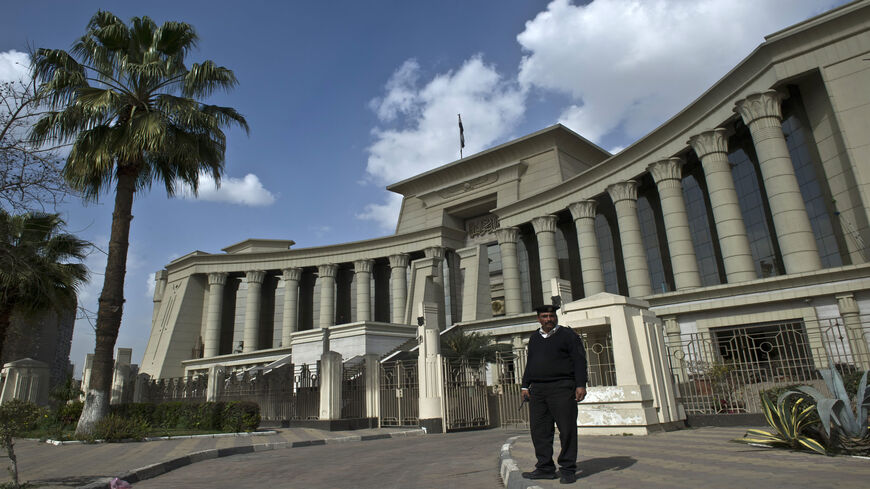 Fahmy replaces Judge Saeed Marie, who was referred to retirement due to poor health.

The appointment is a historic step, as Fahmy will be the first Coptic Christian judge to preside over a court entrusted with monitoring the constitutionality of laws.

With his appointment, Fahmy becomes the fourth oldest judge of the court. He was born on Jan. 1, 1957, and is 65 years old. He held several judicial positions, including vice president of the Supreme Constitutional Court in 2010 and 2014 and head of the Cairo Court of Appeal.

During the swearing-in ceremony, Sisi expressed his “appreciation of the important role of the Supreme Constitutional Court, which constitutes an important episode in the history of the Egyptian judiciary.”

According to a Facebook statement by presidential spokesman Bassam Radi, Sisi also expressed “sincere wishes for the new president of the Supreme Constitutional Court in deploying efforts, showing dedication and assuming responsibility to uphold justice and enforce the law.”

The Supreme Constitutional Court is an independent judicial body tasked with adjudicating the constitutionality of laws, interpreting legal texts and adjudicating requests to suspend the implementation of rulings issued by arbitral tribunals formed to settle government and public sector disputes. It also adjudicates issues of conflict of jurisdiction.

Experts who spoke to Al-Monitor believe that Sisi’s decision to appoint a Christian as the head of the highest judicial body in the country is yet another proof of the state of respect for the principle of citizenship. They described the decision as “historic.”

Essam Shiha, human rights lawyer and member of the National Council for Human Rights, told Al-Monitor that the historic decision confirms that the country is moving in the right direction toward a first-class human rights republic.

He said, “The Egyptian leadership has specific goals that include building a modern, democratic and civil state, as citizenship is the basis of rights and duties in the modern Egyptian state.”

Shiha noted, “Citizenship and equality were absent from the political arena in Egypt [under former regimes]. But the current regime has a clear policy that does not differentiate between Egyptians except on the basis of competence and integrity.”

He lauded “society’s praise of the Egyptian president’s decision,” and noted that the move was an unprecedented qualitative leap that gives hope to every individual, whatever his religion, of reaching any position they want.

Al-Azhar Sheikh Ahmed el-Tayeb congratulated Fahmy for his appointment as head of the Supreme Constitutional Court, and wished him “continued success in protecting the constitution and achieving justice and the rule of law,” according to a post by Al-Azhar Al-Sharif on Facebook.

Grand Mufti of Egypt Shawki Allam also congratulated Fahmy in a press sstatement Feb. 10, noting that his appointment comes as practical implementation and activation of the state of citizenship and the new republic.

Allam made it clear that the “Egyptian state always serves as a model of achieving citizenship for all without any discrimination on religious or ethnic grounds, and that Muslims and Christians are the sons of the same nation.”

Meanwhile, member of parliament Martha Mahrous described in a televised statement Feb. 9 the decision to appoint Fahmy as a “festive day” for Egyptians, stressing, “The new republic in Egypt paves the way for the materialization of citizenship, as it selects individuals based on competence and diligence.”

Egyptian writer Fatima Naoot praised Sisi’s decision, as she tweeted, “Historic decision. Welcome to the state of citizenship. Thank you, Egypt. Thank you, president. We dream of a state where justice reigns.”

In a Feb. 8 press statement, the National Council for Human Rights praised the historic decision, noting that it “demonstrates the insightful vision and human rights methodology of the Egyptian president.”

Moushira Khattab, head of the National Council for Human Rights, said in the statement that the appointment “is a giant step in the field of civil and political rights, as it consolidates the full enjoyment by every Egyptian of their rights away from any kind of discrimination.”

“The decision reflects sincere determination to implement the national strategy for human rights,” she added.

The Supreme Constitutional Court is of particular political importance as its president comes in third place after the prime minister and the speaker of parliament when it comes to replacing the president of the republic in the event of his inability to assume his duties.

Adly Mansour, who was head of the Supreme Constitutional Court in 2013, assumed the presidency of Egypt from July 4, 2013, to June 8, 2014, after former Egyptian President Mohammed Morsi was removed from office in 2013.

A president-elect also takes the constitutional oath before the general assembly of the Supreme Constitutional Court in the absence of parliament, as was the case with Sisi during his first presidential term in 2014.