Little is known about Iranian Gen. Qasem Soleimani's political views, yet some believe he is an "invisible force" supporting Iranian nuclear talks. 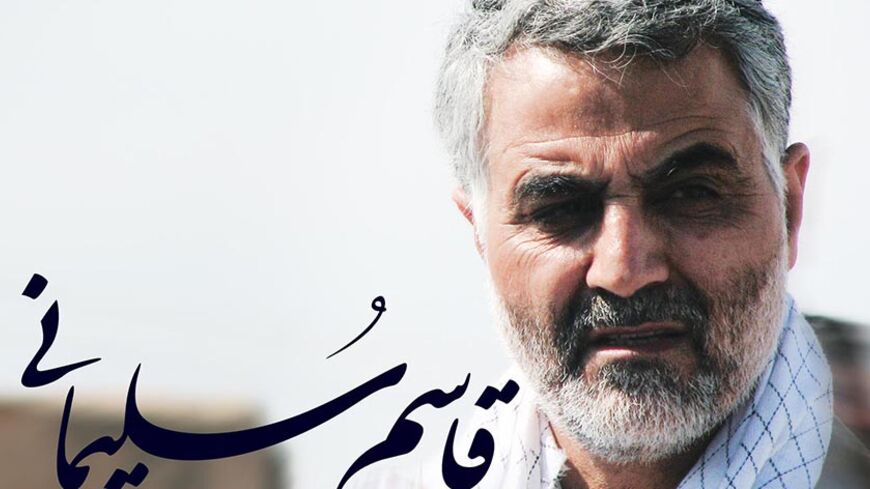 An image from a Facebook fan page depicts Qasem Soleimani next to a stylized version of his name in Farsi, Sept. 8, 2013. - facebook.com/QassemSulaimani

Shadowy Man, Dark Knight, Living Martyr and Haj Qasem are just a few of the monikers of Gen. Qasem Soleimani — Iran's top military man in the Middle East and commander of the Quds Force. Though Soleimani has become famous these days in the regional and world media due to his war against the Islamic State (IS), he was previously relatively unknown in the region — only familiar to those influential and knowledgeable people in the region. These days, he mostly spends his time in Iraq. Iranian officials have confirmed that Soleimani is now advising the Iraqi army and volunteer Shiite troops on fighting IS.

The Associated Press reports that Soleimani doesn't wear a flak jacket on the battlefield and that he has restored Iraqi sovereignty to several major cities. Nazem Dabbagh, the parliamentary representative of Iran's Kurdistan region, told an Iranian magazine that Soleimani doesn't stay within the walls of the palace or luxury hotels. He doesn't merely sit and give orders; he is always present on the battlefield.

According to the BBC, Iran and America have divided operations in Iraq: Tehran fights on the ground, and America fights in the sky. Soleimani’s appearances alongside Badr and peshmerga troops in Iraq is confirmation of Iran’s presence in Iraq, which, according to Iranian military officials, is limited to advice and planning strategies.

Soleimani’s role has been so prominent that, according to Iran’s former ambassador to the United Nations, Sadeq Kharrazi, US Secretary of State John Kerry has called for a meeting with him, and President Barrack Obama has addressed him as a "respectable enemy." Some Iranian officials also believe that his presence in Iraq can influence the nuclear talks.

Soleimani, who is regarded as a pragmatic commander, is moderate in domestic policies. He has not entered into political or partisan issues. According to an informed source, Soleimani's thoughts are distinct from the extremists in both conservative and Reformist camps.

An Iranian conservative weekly reported in September 2013 that Soleimani had disagreements and disputes with the former Iranian President Mahmoud Ahmadinejad.

Al-Monitor's source said, "Gen. Soleimani has moderate opinions and believes that Iran's leadership position should not be undermined, since it is regarded as vital for the political unity and territorial integrity of the country." As Quds Force commander, Soleimani answers to Ayatollah Ali Khamenei, and unlike other politicians, he has not aligned with any of the various factions in the country.

Last year, at a meeting in the city of Sirjan, Iran, Soleimani said: "I believe that, if someone does not believe in the Islamic Republic's leadership, he is neither a nationalist nor a believer in the Islamic Republic and is lying, and if one does not hear his leader’s voice, certainly he does not hear Imam Mahdi [hidden Imam of Shiites]. And today, the red line should be the respect of and obeying the leadership of the system."

Conservative and Reformist figures alike support Soleimani due to his impartiality and non-entry into political controversies. Soleimani has good relationships with Iran's prominent politicians, and according to a conservative magazine, Soleimani visited a main Reformist leader after the 2009 presidential election, which led to riots in the country.

The source said, "Soleimani is so good in relationships with politicians that after his mother’s death, he received messages of condolence from prominent Reformists and conservatives of the country, including Mohammad Khatami, the former Iranian president."

Some in Tehran view the efficient presence of Soleimani in the region as beneficial for Iranian diplomats, even strengthening Foreign Minister Mohammad Javad Zarif's and President Hassan Rouhani’s nuclear negotiating team.

In contrast to some Iranian military officials, Soleimani has never spoken out on — either in favor or against — the nuclear negotiations between Iran and the P5+1. However, his activism in the Middle East and his role in fighting IS has transformed him into an invisible force aiding Zarif in the negotiations.

A former Iranian diplomat, speaking to Al-Monitor on condition of anonymity, said: "Bashar al-Assad’s survival through Soleimani and his effective presence in fighting against [IS] has led major countries to become aware of Iran's ability to push back and defeat [IS]. In fact, the victory of the Iraqi forces against [IS], which was accomplished by the assistance of Gen. Soleimani, has overshadowed nuclear negotiations."

He added: "Soleimani’s actions in the region and against [IS] have made Americans realize that the only way to fight extremism is with the assistance of Iran and the Quds Force commander; this may have been one of the elements in Obama's letter to Iran's leadership and America’s flexibility in its attitude toward Iran in the past."

Some believe that publishing photos of Soleimani next to the commanders of Badr Organization and peshmerga troops has been timed to coincide with nuclear negotiations. Gen. Ismael Kowsari, a former Revolutionary Guard commander and current chairman of the Iranian parliament's Security and Defense Committee, believes that these pictures encourage the Iranian negotiating team to more sternly face the P5+1.

He told an Iranian newspaper, "Definitely, Soleimani’s presence in the region has a supporting role for Mr. Zarif’s team, because this provides them the ability to strongly negotiate."

Moreover, Soleimani is no stranger to the negotiations. He has been equally efficient in negotiations with the United States regarding the spiraling sectarian violence in Iraq. In an interview with the BBC last year, former US Ambassador to Iraq Ryan Crocker referred to Baghdad talks in 2013, saying, "[Iran's ambassador to Iraq] called repeatedly for breaks."

"I couldn't quite figure out why, and then later discovered that whenever I said something that he didn't have covered in his points, he would need to call back to Tehran for guidance — he was that tightly controlled. On the other end of the phone was Qasem Soleimani."

However, he does not look to the United States as a reliable country. According to the book "Iran and the United States: An Insider’s View on the Failed Past and the Road to Peace," written by Seyed Hossein Mousavian and Shahir Shahidsaless, Soleimani, in response to proposals for indirect cooperation with the United States to exterminate the Taliban regime in Afghanistan, expressed his distrust of Washington at a Security Council meeting in this way: "Americans are just looking for a tactical cooperation with Iran."

These days, Soleimani is a charismatic, famous nationalist — a patriot who, in the eyes of many young Iranians, is only concerned with the interests of his country. Maybe that's why he is regarded as a supporter of the nuclear negotiations currently underway in Vienna. The invisible supporter of Zarif's nuclear team advances the strategy of the Islamic Republic in the region, rooting out extremism in the Middle East, which can be considered beneficial to the international community.

by Haitham EL-TABEI with AFP correspondents in the Middle East | AFP | May 17, 2022
END_OF_DOCUMENT_TOKEN_TO_BE_REPLACED