All eyes on Soleimani

Quds Force Commander Qasem Soleimani's return to Tehran marks an end to a much covered trip to Iraq. 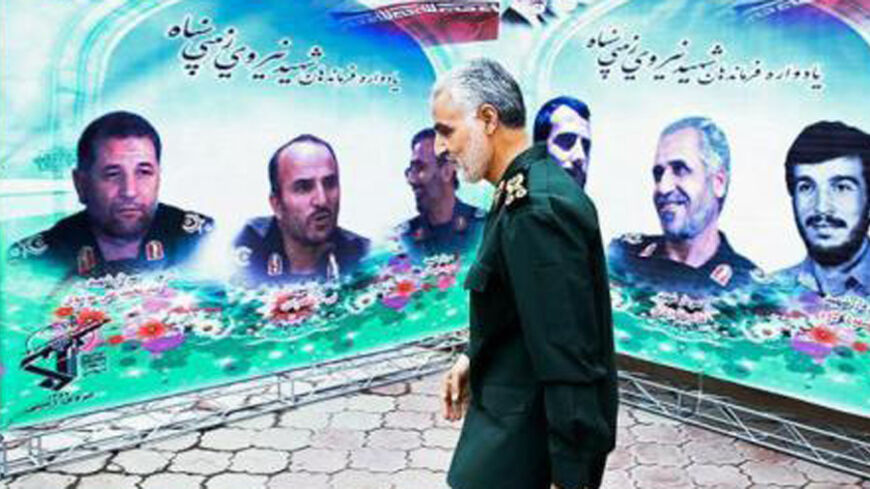 The head of Iran’s Quds Force, Gen. Qasem Soleimani, has returned to Iran from his Iraq trip with harsh words for both the Islamic State (IS) militants that overran parts of Iraq and the United States and its coalition.

Soleimani’s trip to Iraq to advise Iraqi forces fighting IS was unusually public for a general who has issued very few statements and given even fewer interviews throughout his career. From early September all the way through last week, numerous pictures of the commander, who Western media organizations often call “shadowy,” posing with Iraqi forces and sometimes even smiling for the camera appeared on Twitter, Facebook and Iranian websites.

The sheer quantity of pictures of Soleimani in Iraq with various armed groups seemed a like an Iranian message to neighboring countries and the United States and its coalition that Iran had boots on the ground while they did not.

Soleimani’s return to Tehran to attend a memorial for an Islamic Revolutionary Guard Corps commander was treated with the same media hype as his Iraq trip. Pictures of Soleimani standing next to commander Mohammad Ali Jaffari and talking to reporters were published on Iranian websites and social media pages.

“Whether it is the actions of the Americans or the terrorist acts of [IS], it is condemned to failure because it is without truth,” Soleimani told reporters at the memorial. He attributed the victories of Iran to an “inner truth” and added, “Their strategy will not be victorious. And we saw what they did in Syria, but they did not get results.”

Soleimani also praised former deputy commander of the Revolutionary Guard’s ground forces, Nourali Shoushtari, as the “founder of ethics” who broke new ground on the battlefield. Shoushtari was killed in a suicide blast while meeting tribal leaders in the Sistan-Baluchistan province in October 2009.

Even the Reformist media, which provided less coverage of military matters than conservative websites and newspapers, covered Soleimani's return.

In an article headlined, “All eyes are focused on this man,” Etemaad wrote about the enigma of Soleimani. He was described as “a man about whose particular services, very few knew until recently, when they suddenly became top news.” The article suggested that perhaps Soleimani “did not dislike” coming out from behind the curtains and in a way, viewed it as a kind of “media hegemony.”

In its article, “Qasem Soleimani is a daring commander,” Shargh Daily interviewed Kurdish commander Hiwa Rasoul Omar Latif. Latif said that the Kurdish Peshmerga and Iranian forces, particularly those led by Soleimani, have the ability to defeat IS. He called Soleimani a “daring commander” and said that those under his command “listen” to his orders. Latif talked of “a great deal of cooperation” between his own forces and Soleimani’s and said that “Soleimani and his friends” have been successful in Iraq.