Commander of Iran's Quds Force Qasem Soleimani has written an open letter asking that a film about him not be produced and for officials to stop the "exaggeration" about him on social media. 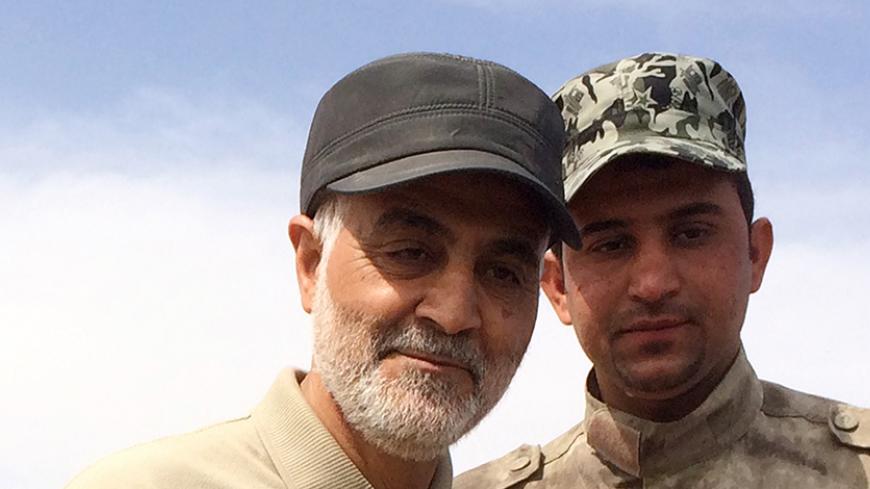 When the fighters of the Islamic State (IS) took over large parts of western Iraq in the summer of 2014, Iran did not hesitate to assist both Iraqi and Kurdish forces in pushing back against the advance of the terrorist group. Iran’s geopolitical decision was also accompanied by what seemed an unofficial media decision: to promote the status of Quds Force Cmdr. Qasem Soleimani in the fight against IS.

Pictures of Soleimani at the front line among Iraqi forces surfaced on social media overnight. The various Facebook, Twitter and Instagram pages dedicated to Soleimani had begun to act as his unofficial media arm, and his popularity has soared online. Often he could be seen looking at the camera, making no attempt to conceal that Iran had sent its commander in charge of regional policy to Iraq.

But now it seems that Soleimani has had enough. In an April 11 open letter to an Iranian filmmaker requesting that he cease producing a film about him, Soleimani also denied some of the things said about him on social media and asked officials to control the rumors.

“I am a soldier full of weaknesses and if not for the grace of God, it is not clear if I would have achieved any of these successes,” wrote Soleimani, who confessed to feeling "embarrassed" when he first heard that a film about him was in production.

In regard to his heavy social media presence, he wrote, “I protest strongly whatever is written about me on social media, and some of it is exaggeration and not true and contrary to security and political interests. And numerous times I have told the relevant authorities in the country.”

On the film project, Soleimani wrote that he had asked the Islamic Revolutionary Guard Corps' public relations department to “thank the dear brother [the filmmaker] for his love of the Islamic Republic of Iran [but] to prevent such an action.” However, after he saw a report about the production of the film on Iranian TV, he said he had decided it was necessary to write the open letter.

He wrote, “There are tens of influential martyrs [and] knowing them and their actions” is a necessity. Soleimani listed a number of important political figures in the Islamic Republic’s history who have been killed and who he finds deserving of a film, adding, “At the head of these is the living martyr, the Supreme Leader [Ayatollah Ali Khamenei], who for more than 60 years has been in this struggle.” It is interesting that he used “living martyr” for Khamenei, given that Khamenei himself has referred to Soleimani by the same term.

Soleimani wrote that he even has “reservations about writing memories of the Iran-Iraq war” and said of the production of the film, “Not only am I not satisfied, but I strongly protest.”

The filmmaker, Saeed Hassanpour, responded to Soleimani in his own open letter. Hassanpour wrote that he had intended to use Soleimani’s character only as “inspiration” and was not going to use his name in the film.

Hassanpour said that he had already issued a denial that the film was about Soleimani, but that the interview with Iranian TV was recorded before the statement was issued. He added that he will change the film per Soleimani’s instructions.

According to Tasnim News, which published both Soleimani’s and Hassanpour’s letters in full, the filmmaker, though he identified as a Basiji, was not authorized by anyone to make the film and was only in the research phase of production.