With all of the media attention Qasem Soleimani is getting, it raises the possibility the Quds Force commander will go into politics. 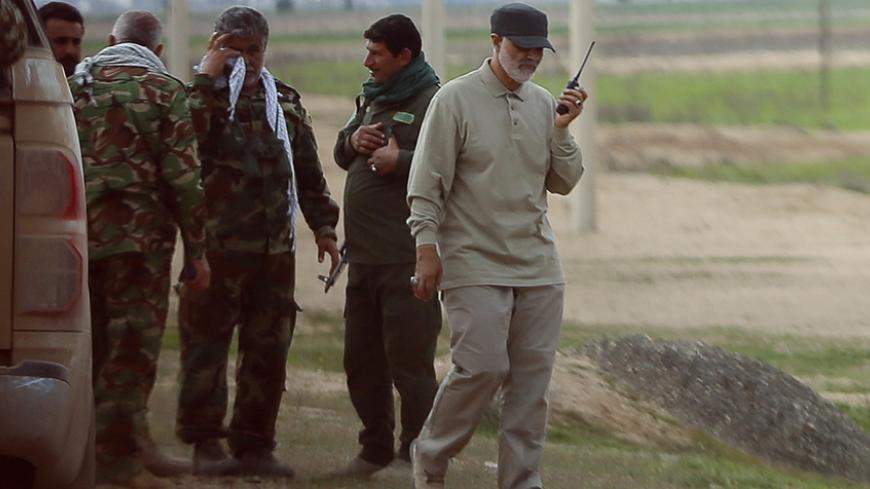 Qasem Soleimani is now known to many who follow Middle Eastern affairs. The commander of Iran’s Quds Force, the division of the Islamic Revolutionary Guard Corps (IRGC) responsible for Iran’s files outside of its borders, has been everywhere in both Western and regional media the last couple of years. Pictures of Soleimani inside Iraq alongside Iraqi forces and Shiite militias have become ubiquitous since June 2014 when the Sunni extremist group Islamic State (IS) took over parts of Iraq.

On the Iranian Students’ News Agency (ISNA), Zahra Asghari took a closer look at the man who competed head to head in polls for Iran’s Person of the Year with the popular nuclear negotiator Mohammad Javad Zarif.

Asghari wrote that when pictures of Soleimani in Iraq first appeared on social media, ISNA chose not to republish the pictures assuming that the images were accidentally leaked online. But as more images of Soleimani appeared in Iraq, on the front line among Iraqi forces and leaders, it became clear the pictures were being released intentionally.

Asghari wrote that while a number of IRGC commanders are advising the Iraqi forces and the Popular Mobilization Units fighting IS, it is clear that Soleimani’s role goes beyond that. Asghari continued that the pictures of Soleimani across various provinces in Iraq have raised questions domestically, regionally and internationally. And since there seems to be no desire by Iranian officials to answer these questions, it has only fueled more rumors and speculation.

Despite Soleimani being the head of the Quds Force, before June 2014, there were few pictures, videos or speeches available of him to the point that Asghari wrote that before this point “interviewing him or writing a report about him was not possible for Iranian media.” Interestingly, even in this long profile of Soleimani, none of the sources Asghari interviewed were willing to speak on the record. The sources of course all had high praise for Soleimani, telling Asghari that they believe that the only other figure who has the same attributes and success record as Soleimani is Hezbollah Secretary-General Hassan Nasrallah.

Despite the popularity of his pictures in Iraq, Asghari noted that Soleimani pictures in Tehran, at the funeral of commanders and fighters killed in Syria and Iraq, or at IRGC ceremonies, have become popular as well. Asghari also wrote that Soleimani was at a funeral ceremony for Jihad Mughniyeh, son of former Hezbollah commander Imad Mughniyeh who was assassinated in 2008 by Israeli and US intelligence. Jihad was killed by an Israel strike in the Golan Heights in January 2015. The article says that Jihad was the nephew of Soleimani. Though it’s not confirmed anywhere else, Iranian media before have reported that Imad Mughniyeh was married to Soleimani’s sister.

The central question that Asghari asks is: “Has the 59-year-old unrivaled commander of the battlefield outside of Iran’s borders ever thought about the world of politics?” Asghari, naturally, does not have an exact answer, but she has ideas.

It’s impossible to know what Soleimani’s next steps are. At the moment, the commander who appears to prefer to spend his time in the trenches at the front line in Iraq may not be tempted by the monotony and bureaucracy that comes with public office. But given his popularity and closeness to Supreme Leader Ayatollah Ali Khamenei, Soleimani has a wide range of options.